Ghost Of An Office 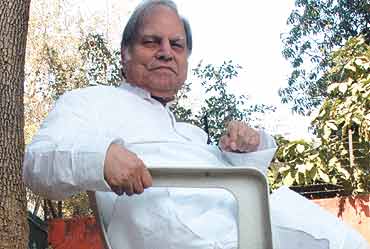 One of the great unsolved riddles of the Manmohan Singh government is the Ministry of Minority Affairs. Why was it created, what will it do, when will it be activated?

The Congress, always nervous about Muslim desertion, presumably saw the step as another sop thrown in the direction of the community. So, on January 28 this year, it gave India its first-ever ministry of minority affairs. Veteran Congressman and former Maharashtra chief minister Abdul Rehman Antulay found himself back in the Union cabinet after a decade. But more than two months into the job, he still hasn't found one.

To the BJP, the move is just more ammunition for its shelling of the Congress on charges of "minority appeasement". The Congress hasn't moved forward on the issue, and does not know how to retreat. Seventy-six-year-old Antulay, meanwhile, has become a minister in search of a suitable office. The ministry, now given charge of all the minorities of India—including the world's second largest Muslim population—currently functions out of the minister's Delhi residence, located near Jantar Mantar. To add insult to injury, a mere

Rs 2 crore has been allocated to set it up. Antulay puts up a brace front. "I don't need an office. Wherever I am, my office is." Has he taken it up with the PM or Sonia Gandhi? "It is too petty for a man of my age and seniority to ask for an office," he says.

The question, though, remains. Should there even be a separate ministry for minorities? If the founding fathers of India saw no need for a ministry that goes against the ideal of a common citizenship, what drove Sonia Gandhi and Manmohan Singh to create one? What is worrying the Congress is that many Muslims are asking these questions. Says Dr Tahir Mehmood, former chairman of the Minorities Commission and an expert on Islamic law, "I gather that there were some demands for coordinating welfare scheme for minorities, particularly Muslims. But this is bound to be debatable. Till now, minorities were the responsibility of all departments and ministries of the government of India. Does this now mean that ministries like social welfare which have huge budgets will no longer include minorities in their schemes?"

Sociologist Imtiaz Ahmed makes a more political point: "Discrimination against minorities will not end by creating a ministry in a climate where every Muslim issue becomes controversial. If you think deeply about it, this reinforces the ghettoisation of minorities and affects the concept of equality of all citizens."

Not all Muslims, however, are disappointed. Some counter-argue that since Muslims are lagging behind in every sphere and the government in any case does nothing for them, this move may make it easier for them to approach the system. Maulana Mehmood Madani of the Jamait-e-Ulema-e-Hind, for instance, sees no problem with the creation of a separate ministry for minorities. "The real issue," he says, "is the lack of political will to do anything. No body created for Muslims till now has been given any real teeth." Social activist and commentator Asghar Ali Engineer adds a warning note. "The danger," he says, "is that this could be just another showpiece. Nothing done in the past in the name of minorities has been backed by real governmental will. I don't think the intelligentsia is impressed while the mass of Muslims remain outside the purview of any development."

As it is, the number of central government bodies created in the name of minorities is ridiculously long. There are three national commissions—the Minorities Commission, the National Commission for Religious and Linguistic Minorities, the National Minorities Development and Finance Corporation. These bodies, although intended to be autonomous, will now report to the new ministry. Besides, there is the National Commission for Minorities Educational Institutions, which was initially transferred to Antulay's ministry, but four days later returned to the HRD ministry led by Arjun Singh. There is also the Central Waqf Council and the Maulana Azad Education Foundation, both transferred from the ministry of social justice and empowerment to minority affairs. While these bodies were a minuscule part of the huge social empowerment ministry, they are really the most tangible charges that Antulay has, given the fact that education remains out of his purview.

As for the various commissions, they really have no teeth and seem to be designed to give employment to retired bureaucrats, lawyers, judges or political hangers-on. As they say, where there is a will there is a mission, where there is no will there is a commission! It's no surprise than that the Muslims who are wildly enthusiastic about the new ministry are the same bunch who are from the Muslim Personal Law Board, or other exclusive Muslim organisations and have appointed themselves life-long spokesmen for the community. This includes the handful of "sarkari Muslims" skilled at networking in Delhi. Since many of them run NGOs, it is simpler for them to tap a single ministry. Given Antulay's meagre resources, he can hardly reach out to the mass of minorities.

The government notification lists 20 charges for the ministry—vague points like "overall policy of the developmental programmes of the minority communities" or "all matters relating to minority communities except law and order" while Point 20 is "any other issue pertaining to minority communities". The entire enterprise smacks of tokenism. Antulay begs to differ. "Do you think I can be reduced to a token? You forget I have survived many battles." He goes to lengths to stress that "there are other minorities besides Muslims. I'll get a notification getting Kashmiri Pandits of j&k declared a minority. I want a riot-free India. This ministry will work to break barriers between communities." For the moment, the ministry is working out of Antulay's home; he has just conducted a meeting with his officers in his living room. So, will it be an iftar-roza-haj ministry? "This ministry will never host an iftar," he says.

Antulay isn't the problem. The attitude of the Congress is. First, it creates a ministry without the minorities really demanding it, and invites an attack from the Hindu right. Then, it treats the ministry so shoddily that it can be seen as an example of how important minority welfare really is to the ruling party. It's a bad idea, badly implemented. Just another ham-handed attempt by India's grand old party to chase the mirage of a minority vote.

My Tutor Says So