Gently, On The Bramble

Imperialism and other animals; All hands on the deck; Naidu numerology, Mission of goons; Things fall apart 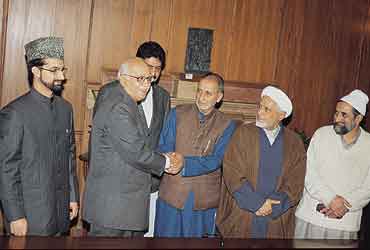 outlookindia.com
-0001-11-30T00:00:00+0553
For a decades-old dispute, this was the first time the Indian Union felt it could make some really fruitful gestures, thanks to the gentle, ambient light that has been illuminating the path after the recent SAARC meet in Islamabad. So, the government threw open the doors to the separatist Hurriyat leaders as five of its top honchos met deputy PM L.K. Advani in his office on January 22 and resolved to continue the meetings with the next round of talks scheduled for March. Advani, for one, is reported to be pursuing the talks rather seriously. An indication of this can be seen in the fact that this meeting was preceded by a lot of backchannel discussions between the Centre’s interlocutor N.N. Vohra and the Hurriyat leaders.

At the end of a two-and-a-half hour meeting, Hurriyat’s Abdul Ghani Bhat said both sides had agreed to end all forms of violence and follow a "step by step" approach to resolve the Kashmir issue. "We had an amicable, free, frank, fair and fruitful discussion and it has been agreed upon that the work for the release of political prisoners will be expedited," Bhat said. Hurriyat chairman Moulvi Abbas Ansari said they were satisfied with the talks and it was a ‘significant step’. Quite so, because it implies a tacit recognition of the Hurriyat’s political importance. Advani himself said "it was a good beginning".

What added to the good atmospherics this Thursday night was the Hurriyat team’s scheduled meeting with the PM. Earlier in the day, Advani first met the coordination group and was briefed by Union cabinet secretary Kamal Pande, Union home secretary N. Gopalaswami and other members of the group.

'Chandrayaan-1 Will Galvanise Us'