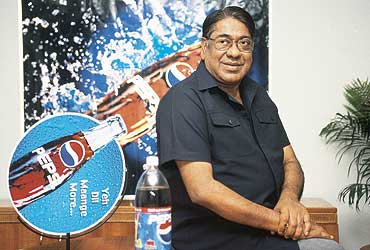 outlookindia.com
-0001-11-30T00:00:00+0553
The news was made public last week via a memo from Peter Thompson, president of PepsiCola. That Priya Mohan Sinha (or Suman, as he is referred to by almost everyone), the remarkably low-profile ceo of the exceptionally high-profile PepsiCo India, was calling it a day. "The mark of a strong leader is to chart a winning course, build a great organisation and deliver outstanding results," said the memo, addressed to all Pepsi employees. "Suman has accomplished all of that, and more."

It has been an extraordinary nine-and-half years at the helm for the 61-year-old Sinha. When he joined as ceo, PepsiCo was perhaps the most controversial foreign company in India. From dozens of questions in Parliament alleging underhand dealings to agitations on the streets, Pepsi was the first multinational to bear the full brunt of the swadeshi fury. But economic liberalisation and marketing chutzpah made sure that all that is a barely-alive memory. Today, it has a Rs 2,500-crore business, with 43 plants and more than 55,000 people in the system. Pepsi is also the No. 1 soft drink brand in India.

Through all this—from the skirmishes in government corridors to the pitched battles in the marketplace with Coke—Sinha has managed to stay low-profile, soft-spoken and shy of the limelight. Indeed, there is no visible similarity, even connection, between the brash Pepsi persona and the quiet man in the soberly furnished corner office at Pepsi's swank glass-fronted headquarters in Gurgaon, a Delhi suburb. But ask him about that and he strides across the room to run a recent Pepsi commercial for you. He points at the slogan on the T-shirt that the aged Amrish Puri wears in the ad: '18 Till I Die' and says: "That's Pepsi's message for India: forever young. It's this passion which has driven me and my team all these years. The fact that I didn't have to sack anyone proves that all those who work with Pepsi are madly in love with the company and forever young." Then he adds, with a chuckle: "Like me."

Sinha started his career at Standard Vacuum Oil, a joint venture between Mobil and Esso. But as a nephew of Jaiprakash Narayan, Sinha says he understood the country's political system well before his baptism in the corporate world. Indeed, he laughingly points out that there is a tinge of history in even his birthday: August 15. However, he feels his last assignment—for Hindustan Lever, which required him to be stationed in Delhi as a director for nine years—was the most significant part of his pre-Pepsi career, for he utilised the opportunity to understand the intricacies of babudom and the mechanisms of doing business in India. As a result, the transformation from Lever to Pepsi was hardly a difficult task. "For me, it was smooth as silk... like an engine being shunted with the bogies. I just started running."

Today, India is PepsiCo's second largest investment centre ($500 million this year) outside the United States. There's more: India today is among the three biggest prospective markets and the top 10 significant markets for the group. Reflects Sinha: "The mantra for any multinational to succeed in India is to be a part of its psyche and people. There is nothing like a typical Indian mindset. Business climate is the same everywhere. So are governments."

Yes, but his years as the top man in Pepsi have also coincided with a sea change in the role of business and industry in our lives. And Pepsi has been at the forefront of what many people see as a dangerous trend towards corporatisation of our public institutions, from education to even religious celebrations, in which multinational ad banners and promotional schemes are today an integral part". Can you shut off your mind from everything that is happening around you: market, homes, television, internet?" argues Sinha. "Then you need to go to the Himalayas and become a saint. In the new millennium, corporates need to play an increasingly dominant role in shaping social issues. Like what happened in Gujarat. The social face must always represent the mind of a multinational."

In the meantime, the cola wars rage on. And will. Unlike in the West, where territories in the consumer's mind are more or less clearly demarcated for Coke and Pepsi, in India the battle for every square inch of mindspace has to be bitterly fought and won. When Pepsi, then known as Lehar Pepsi-aha, was launched, it had to face two very strong cola brands—Thums Up and Campa Cola. Interestingly, in terms of competition, the scenario still remains the same. "We still fight two cola brands: Coke and Thums Up. The cola wars are being fought for just two slices of life—the minds of the consumer and that of the seller. The fight revolves around brand recall and its availability," says Sinha, quickly adding: "And we had some terrific advertising campaigns—Nothing official about it, and Yeh Dil Maange More—which stole the thunder from the rivals."

He sees Pepsi as a brand truly engrained in the life of a significant section of Indians. "It's a matter of tremendous satisfaction when a Major recites a Pepsi ad line (Yeh Dil Maange More) to his seniors to describe a warfront victory. The ncaer says soft drinks, along with biscuits and tea, are the three most widely consumed products in the country. We've been a part of this growth. And will continue to remain so," adds Sinha.

But what about the next frontier, rural India, an area where both the cola giants admit they have little penetration even after all these years? Sinha agrees that the process has been very slow but is quick to add that it is not the companies' fault: "Only after we have finished the first target, that is full penetration of the metros and mini-metros, can we look at the next. Besides, ours is a business of selling a chilled product in a returnable glass bottle. Chilling is a problem because of lack of power in the countryside. And small shops do not have capacities, which means it requires many, many more travels for a distributor to get a shop stocked. And that will not happen immediately."

But he's satisfied, not only with the soft drinks business, but also with the other little-discussed areas where Pepsi operates—agro-exports, currently a Rs 300 crore business for the company with products like potato chips, snacks, tomato, fruits, rice, and of late, aflatoxin-free peanuts, a rage across the US and Europe. PepsiCo India is now close to signing a major deal with fishermen along the southern coast to develop and breed special seaweeds which have huge global demand since it acts as a binder for pet foods. "Our contract farming model is being followed across Punjab, Uttar Pradesh and now in Andhra Pradesh. It's a significant achievement," says Sinha.

So it's time to move on now. His successor has already been named: Rajeev Bakshi, managing director of Cadbury India. Sinha, though, will be around for some more months, making sure the transition is smooth. After which, no more corporate jobs, not even consultancy.Sinha wants to teach. And he would like to catch up with his reading, join his wife for some golf, and spend time with friends like another ex-Leverman, Shunu Sen.Also, visit Calcutta, where he grew up: walk down Park Street, take rides on the Hooghly and listen to the boat radio. "I won't be a part of the rat race that's synonymous with Delhi... won't that be fantastic?"