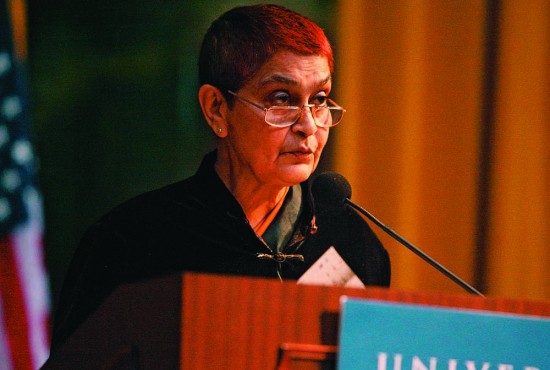 One of western academia’s foremost literary and post-colonial study theorists, Gayatri Chakravorty Spivak has built, over nearly 50 years, a formidable sch­olarly reputation. Spivak’s work is notoriously difficult, and even co-faculty members at Columbia University, where she is the university professor in the Humanities, and The New York Times have professed their troubles in negotiating her scholarship. The latter called her ‘famously hard-to-understand’. ‘Preposterous’, ‘pretentiously opaque’, ‘bewilderingly eclectic’ have been used in bafflement, and been imperiously rebuffed by Spivak, who describes herself as a ‘para-disciplinary, ethical philosopher’. “That’s their problem, not mine,” she told Mint.

Spivak has been a trailblazer and never shied away from taking on canons. It was one such attempt—translating Jacques Derrida’s Grammatologie in 1967, despite never having translated anything, that brought her fame at just 25. Her best known work, Can The Subaltern Speak? (1988), criticises western scholarship of peoples and cultures on the margins as essentially being driven by ingrained perspectives and interests that distort the representation of the ‘subaltern’. She localises this to western scholarship on sati, seen as one of ‘white men saving brown women from brown men’, and questions why the voices of the women were never included. Spivak has also translated some of Mahasweta Devi’s works, to which she has added her critical prefaces.