Bangla Bhai is to be executed, a lot of political questions hang 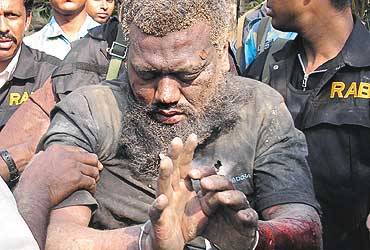 outlookindia.com
-0001-11-30T00:00:00+0553
This is one decision of the Khaleda Zia government the people of Bangladesh and foreign players, including India, should have been pleased about: the surprise move to expedite the execution of seven Islamic militant leaders including Siddiqul Islam alias Bangla Bhai, his mentor Shaikh Abdur Rahman, and Ataur Rahman Sunny. These three militant leaders of the proscribed Jama'atul Mujahideen Bangladesh (JMB) have been sentenced to death for killing judges Sohel Ahmed and Jagannath Pande last year, besides being accused of masterminding a spate of deadly bombings across the country.

Yet, ironically, the move to hasten the execution of the top JMB leaders threatens to stir up the political cauldron months before Bangladesh goes to general election. The Opposition, spearheaded by Sheikh Hasina Wajed's Awami League (AL), is asking: why hasn't the government demonstrated the same alacrity in executing those who assassinated Bangladesh's founder Sheikh Mujibur Rahman as it is displaying towards the hanging of Bangla Bhai? For Hasina, this could become a potent issue to rally her supporters, just as prime minister Khaleda Zia hopes to exploit it for conveying her resolve to counter Islamic fundamentalism.

It was on May 29 that an additional district and sessions judge's court in Jhalokati, a western Bangladesh district, sentenced to death the three militant leaders. The trial itself had been stormy: they had described the court taguti, or non-Islamic, insisting on a trial by an Islamic jury board. On the day of judgement, the militant leaders refused to take off their shoes before entering the dock; they were subsequently compelled to do so. When the judgement was being pronounced, they began to sing militant songs. Shaikh Abdur Rahman shouted, "Although we asked the government for holding our trial by an Islamic jury board, it did not pay any heed to it. Our trial has been conducted hastily by a taguti court. Why's the government in such a hurry? Why is it afraid?" The JMB chief said he and others would not appeal against the death sentence under the existing judicial system.

Rahman's avowed refusal to appeal against the death sentence can't abort the legal process. For, under Bangladesh laws, a case involving the death verdict is automatically referred to the high court for approval. And thereby hangs the tale. The case would come up for hearing at least three years later, should the high court adhere strictly to the serial order of death sentences pending before it. Currently, sources say, the high court is hearing the death references of 2003.

In stepped the government to hasten the process. On June 12, the attorney general's office filed an application in the bench of the high court, seeking permission to prepare the paper book (history of the case) on a priority basis for it to hear the death reference of the judges killing case. The court granted permission to the government. Asked to explain the government's alacrity, law minister Moudud Ahmed told Outlook, "Because our aim is to root out the militants." He also said, with a smile, that his government would try to execute the militants before its term expires in October.

Once the paper book is prepared, and the high court begins to hear the judges killing case on a priority basis, the government may actually meet its October deadline. This is because while reference to the high court is automatic in death sentences, these cases can go to the Supreme Court only on appeal. Ahmed explains, "They've already said they don't abide by the existing courts. If they don't appeal there, the verdict can be executed after the high court disposes of the case."

The law minister's enthusiasm is in sharp contrast to the way his government had allowed the execution of those convicted for assassinating Mujib to linger. In November 1998, a trial court sentenced to death 15 people for the killing of Mujib. Subsequently, the high court spared three of them. Since then, the case is pending with the appellate division of the Supreme Court. At least three judges are needed to form a bench, but only one among the seven sitting judges in the appellate division can currently hear the leave to appeal petition. Of the six, two have already heard the case in the high court, three felt 'embarrassed' (unable to hear the case for some reason which need not be made public) and one has become the chief election commissioner. The government can rectify the situation by appointing two judges to the appellate division on an ad hoc basis. But the government had done nothing to appoint ad hoc judges from the high court division to the appellate division for expediting the case that has been pending since August 2001.

Seven of those convicted for killing Mujib are abroad. The previous AL government instituted a task force to help extradite the fugitives. But the task force was dissolved after Khaleda came to office in 2001. For 21 long years, the trial of Mujib's killers had been barred by the Indemnity Ordinance, later legalised through Parliament. The infamous ordinance was repealed in 1996, when Mujib's daughter Sheikh Hasina became prime minister. It was only then that the murder case, filed in 1975, was reactivated on October 2, 1996.

The Khaleda government even terminated the contracts of six counsels of the Mujib case, after the death of chief counsel Sirajul Haque on December 19, 2002. Advocate Anisul Haque, a prosecution lawyer who too was dismissed, told Outlook, "No counsel was appointed later. There's no development in this case due to the government's adverse attitude."

Haque ascribes the apathy to the composition of the present government—many of its members are considered part of what is labelled as the "anti-liberation force". "They don't want to try the killers of Mujib because they benefited from his killing," he says. Adds reputed lawyer Kamal Hossain, "The state is responsible for prosecuting the killers of Mujib. People are concerned that criminals are not being prosecuted."

Haque says the Zia government has moved swiftly against Bangla Bhai and others not out of conviction, but because of "immense pressure from the donors and foreign countries". Indeed, many political analysts believe that with the election scheduled for early 2007, the ruling coalition would execute the militants to convince international players about its stance against Islamic militancy, which, Opposition leaders allege, surfaced because of the government's patronage.