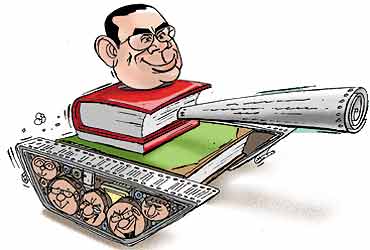 outlookindia.com
-0001-11-30T00:00:00+0553
Rahul Gandhi is, after all, his father's son. But while Rajiv lassoed in his circle of buddies and advisors once he was catapulted into the PM's chair, the Congress is helping its crown prince create a similar team early on in his political career.

Ergo, Team Rahul: an embryonic pool of young, foreign-educated technocrats with ideas, initiative and, if possible, political pedigree. This informal team-in-the-making will present strategy papers to the young Gandhi and advise him on matters ranging from Indo-China relations and foreign policy to party-building in UP and inducting young blood. The goal, obviously, is to nurture a future leader. In addition, the team will be drafted in to work in various advisory capacities for the Congress.

At the moment, though, Team Rahul is more an idea. The name 'Team Rahul' itself was coined in an inspired moment by a Congress functionary and is not a formal name. However, it captures the essence of the informal advisory group the party is hoping to build. Once it goes beyond its nebulous conceptual stage, Team Rahul will have some 20 young professionals ranging from their late 20s to early 40s, handpicked by the party's resident technocrats like Sam Pitroda and media strategist Jairam Ramesh.

"There has been an idea within the Congress for some time to draw upon whatever resources we have to build a young advisory council," says Congress member Yusuf Ansari. At 27, the British-educated Ansari, coming from an old political family from UP and hoping to contest in the upcoming state assembly elections, is a likely candidate for the team.

Examples of other possible future advisors (who may or may not have their own political ambitions) include Ranjan Kumar, a 34-year-old business finance lecturer and entrepreneur; Rajeev Gowda, a 40-year-old associate professor of public policy at IIM-B; and Aditya Tripathi, 35-year-old marketing professional with degrees from the London School of Economics and IIM-A. There is also a younger crop of fresh management graduates, students of politics, economics and public policy, investment bankers and consultants who will initially be attached to MPs or work as researchers before stepping into future advisory and semi-political roles. It is not known whether Rahul's personal circle of friends will be part of this team.

No matter where their interests lie, two things will likely unite the members of this advisory group: top-notch professional qualifications and political pedigree. As Jairam says, "If they have political lineage, they make it. Else, it's that much tougher."

Team Rahul has been an idea in the works for some time, but received a fillip after the Congress victory and Rahul's formal entry into politics. Jairam says his inbox is bombarded on a daily basis with queries from Indian students and professionals in different corners of the world about work opportunities in the Congress. "Most of them want to work in an advisory capacity," he says. Given this renewed interest in the Congress, especially from the youth, the party is for the first time working out an institutional mechanism to utilise this talent optimally. Although the exact nature of such a mechanism has not been worked out, "any such institutional system has to be pivoted around Rahul and Priyanka," says a Congress leader.

Of the 20-odd professionals currently on the Congress' shortlist for Team Rahul, a few have already prepared strategy papers. For instance, IIM-Lucknow graduate Ranjan Kumar, whose sister fought the recent general elections on a Congress ticket, has drafted a paper outlining the party's prospects in UP, and the strategies necessary for party-building and improving the seat tally. Kumar, who began his political flirtation with the Samajwadi Party in Lucknow, soon switched over to the Congress because "regional parties don't understand the language of professionals. They go by their own instincts". He felt his understanding of caste intricacies and professional experience—he spent two years teaching business finance at Monash University, Australia, and has been a banker—would be put to much better use in the Congress.

Similarly, Rajeev Gowda, who holds a PhD in public policy from Wharton and has been teaching the subject for several years, now wants to "practice what I have been preaching". Gowda too is from a political family in Karnataka, and was contacted by senior national leaders last year to "professionalise the party". Since then, he has developed a blueprint to create an executive education and training institute for Congress workers, "to create a more vibrant, active and thinking party culture".

Meanwhile, Yusuf Ansari, who joined the Congress in 1998 after graduating from LSE and working with senior party functionary Salman Khursheed, has presented over 160 position papers, some of which have been sent to Rahul. Although his primary interest is in politics, Ansari believes his six years of grassroots experience—observing the December 2003 elections in Rajasthan, campaigning in UP, helping in candidate selection—puts him in a vantage position to prepare policy notes on poll management.

Yet others, on condition of anonymity, reveal that they have met and discussed various aspects of party-building with Rahul, or have been asked to present specific papers to him. One such potential future advisor—the Ivy League-educated son of one of India's best-known technocrats—admits to being "phenomenally impressed" by Rahul. Another foreign-educated son of an ex-bureaucrat on the Team Rahul shortlist has already worked with the Gandhi scion on campaign strategies for the Amethi election. Rahul's preference for facts, figures and crisp presentations and his own professional training is also something the would-be members of Team Rahul are attracted by. "It is easy to present papers to him in a professional language," says one.

As the party rides the high tide of optimism and picks and chooses its pride of advisors for Team Rahul from the queue of skilled enthusiasts, one wonders how far the elite foreign degrees and work experience will go in advising Rahul on the vagaries of grassroots India, where much of the Congress' constituency—past and potential—lies.