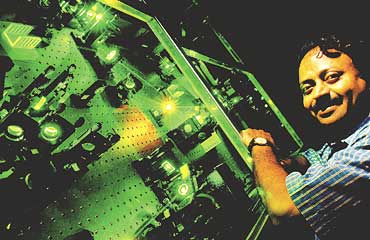 G. Ravindra Kumar and his colleagues at the Tata Institute of Fundamental Research, Mumbai, set out 10 years ago to work on laser fusion, at a time when it was considered among the big disappointments of 20th century science. Millions of dollars had been sunk into research by the West with little to show.

A decade on, though, Kumar and his team’s work is seen as "pathbreaking" by the international scientific community. Provoking matter using short, high-intensity laser led to the discovery of giant ultrashort magnetic pulses, millions of times larger than the earth’s magnetic field, the sort that exists only in stars. Simply put, they created table-top versions of stars: plasma that emits visible light, X-rays, gamma rays, electrons and highly-charged ions. Then the team created nanostructures that helped the plasma absorb more than 80 per cent of the laser: a more brilliant yield and a more efficient source of X-rays.

What’s next? A "tsunami of electrons", an unsustainable giant wave released when matter is excited, crucial for "fast ignition", a process that may make laser fusion a reality. Also a source of cheap, safe and endless power.