The assembly stands dissolved, Modi has his election groundwork ready, but dissent within the party and fears of Vaghela unleashing a strong caste card make the Gujarat CM a nervous man. 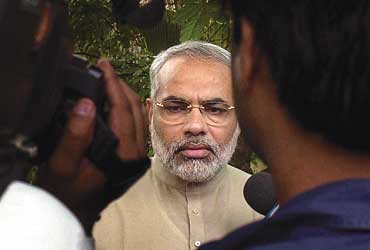 outlookindia.com
-0001-11-30T00:00:00+0553
Last fortnight, at a high-level meeting, Gujarat chief minister Narendra Modi suddenly asked his top 150 policemen present what the headlines in the next day's newspaper would be? Stumped by this somewhat bizarre interrogative, the policemen grappled for an answer. A triumphant CM provided one immediately: "Your intelligence assessment is very weak. A certain top industrialist is dead and you do not know." Within 15 minutes, the said industrialist's chief representative in Gujarat was on the phone with Modi, telling him that while his boss was indeed in the hospital, he was quite alive. How did you know, asked Modi? Because that is what you told your policemen a little while ago, replied the executive.

It's this sense of overconfidence that is possibly the reason why so many in his own party disapprove of Modi. He has rubbed cabinet colleagues and bureaucrats the wrong way. He has humiliated senior party leaders. He has been accused of being boorish and vindictive. Indeed, so insolent are his ways that there are many who'd like to see his grand design to be CM for the next five years foiled.

Having dissolved the assembly in a haste, amidst talk of a Hindutva wave and expressions of communal polarisation, Modi is today a troubled man. The genesis of his troubles lies not so much in external factors as in the dissidence he is facing from within the BJP. With everyone arguing about the merits of holding early elections—they are now very much a reality whenever they are held—the real issues confronting Modi may be waiting to erupt. Modi's efforts to present to the world an all-is-well-with-the BJP-in-Gujarat facade could well be just that.

So, while the Opposition in Delhi may be biting its nails nervously watching how the BJP banner is trying to capitalise on the so-called communal polarisation and opposing early elections, the picture inside the state unit is different. Modi is in the midst of a gradual isolation inside his own party with several stalwarts completely in disagreement with his ideas and style of functioning. "The level of discontent within the ruling party is astounding. I do not know how we can go to elections with this combination," says one disgruntled party member. His concern is not unfounded, given that:


It was in June that Modi began toying with the idea of elections after being told to hang on at the BJP's Goa meet. Monsoon had arrived in Gujarat on time and people were hopeful that the state would be able to beat back a fifth year-in-a-row drought. But it's not to be. Despite the sowing, there have been no rains and the prognosis is that Gujarat is in for another round of drought. Admits a BJP leader: "The first round of rain encouraged us to go in for dissolution of the assembly. Now things look different."

It was not the onset of rain alone that egged Modi towards opting for early elections. Under the spell of the vhp and the Bajrang Dal, he was convinced that the Hindu vote was now his for the asking."The Muslim was scared and demoralised, the Hindu was aggressive and upbeat. Modi thought this is the time when the iron was at its hottest," says veteran Gandhian Chunnibhai Vaidya. But, according to him, "Despite Modi's best efforts, he has failed to evolve an anti-Muslim mindset he was hoping to." According to insiders, what also influenced Modi's decision on dissolving the House was the presence of K.P.S. Gill as security advisor, who had during his short stay in Ahmedabad managed to restore a semblance of order and the annual Jagannath yatra had turned out to be peaceful. Modi thought the time for elections was indeed ripe.

Predictably, the BJP wants early elections to cash in on the time factor. Says party chief whip Mangaldas Patel: "The CEC must ensure the next assembly session is convened six months after it met on April 3. Which means it should be next convened by October 3. For this, polls have to be held by September 20, so that counting is done, the notification is issued and government formation begins." Clearly, this is not how the CEC sees things. But BJP leaders argue that an early dissolution of the assembly would only be effective if polls are also held early.

Nothing, therefore, is being left to chance. That Modi has done his election groundwork is evident from the package of populist decisions worth Rs 165 crore he took 48 hours before dissolving the assembly in an effort to pre-empt EC regulations that come into effect once elections are announced. The CM's measures include:


All these projects were announced with great fanfare, never mind whether the state has the money. Asks Gujarat Congress leader Amarsinh Chowdhary: "Someone should ask Modi where he'll get the money from. The state is already running on overdrafts." Well-placed sources confirm that stiff resistance also came from some members of Modi's cabinet, but the CM used his veto to push through his projects. Their future, though, is uncertain.

While the populist schemes are mired in the state's poor financial health, other factors haven't proved too encouraging for Modi either. He had an internal survey conducted on March 16 under the guidance of senior ministers of his cabinet, who were to undertake a micro-level analysis of every single assembly constituency, the caste equations, track record of individual candidates and their strength and weaknesses to make a realistic assessment of their electoral worth. Their verdict: the BJP would win a whopping 145 out of 182 seats in the Gujarat assembly, up from the present 117. Another survey conducted in April-end scaled the BJP seats to a more realistic 110. Last fortnight, a third informal ministerial survey has put the BJP tally to less than 100 and that remains a serious cause of worry for the party.

And if all this hasn't been enough for Modi, developments in the Congress camp have given further cause to make both him and the BJP more nervous.The stepping of veteran leader Shankersinh Vaghela into the election theatre as the Congress party chief has set alarm bells ringing. It was a plan conceived by AICC member Ahmed Patel and executed by Congress observer for Gujarat Kamal Nath. While Modi himself chose not to take too much notice of the new appointment, others in the party privately express concern at the turn of events.

Analysts in Gujarat say that Vaghela, out in the political cold for the last few years, is planning a grand comeback at the expense of the BJP and there is a good chance of him unleashing a caste card that could equal Modi's Hindutva card in intensity. Congress leaders are working hard on its once surefire winner—the KHAM or the Kshatriya-Harijan-Adivasi-Muslim alliance—which together would constitute an absolute majority of voters in the state. Will he work on the caste alliance? Vaghela said that with the BJP government in power for over four years, no alliance needs to be built up. "There are problems of electricity and water faced by the common people. These are not problems for the ruling BJP though. The people of Gujarat know that." But Kamal Nath is more forthcoming: "We are going to weave a series of alliances that will make it difficult for the BJP to breathe easy. There is tremendous enthusiasm among the people."

Vaghela's political rally in Ahmedabad last week, the first in years, drew crowds which could only be bad news for the ruling party. He is the one man who can't be underrated. Claiming responsibility for setting up the BJP in the state, Vaghela has a private score to settle with Modi. In the late '80s Modi was primarily seen as responsible for the ouster of Vaghela from the BJP fold. Now it is the veteran's turn to turn the tables on Modi.

BJP leaders admit they are nonplussed by the recent poll trends. The by-elections held in the recent past suggest that the Congress may be back in the reckoning despite a decrepit and discredited organisational structure. It has as many as 32 general-secretaries in Gujarat, a reflection of the ridiculous levels of infighting and factionalism. Despite this, it has the potential to damage the BJP. Save Rajkot, where Modi himself was contesting, the BJP lost Baroda and Surat to the Congress; it had lost in the Sabarkantha Lok Sabha where Congress' Madhusudan Mistry won as also at the Sabarmati assembly constituency where Congressman Narhari Amin won.

And strangely, though in a hurry to hold assembly polls, Modi's been edgy about other elections in the state. He has postponed elections in 85 nagarpalikas, 15 taluka panchayats and two zila parishads. Opposition leaders allege that Modi isn't keen that any election be held before the assembly polls. "Where is the confidence in evidence?" asks Congress leader Naresh Raval.

Congress leaders are also pitching their strategy on poll arithmetic. They argue that unlike 1998, this time around it'll be a straight BJP vs Congress contest. In 1998, Vaghela's All India Rashtriya Janata Party contested 168 seats and won only four. But it polled nearly 13 per cent of the total votes, cutting off the Congress candidates in close to 25 constituencies by relatively small margins. The Congress polled nearly 36 per cent of the total votes cast. Put together, the two polled more than the 44 per cent polled by the BJP.

Yet another factor spurring Modi's isolation is his not having Keshubhai Patel on his side. The former CM is seen as being primarily responsible for weaning away the powerful Patels from the Congress after Chimanbhai Patel's death. The Patels form nearly 20 per cent of the total votes in Gujarat. Aware of how crucial this votebank is, the BJP high command is trying hard to woo the Jan Sangh veteran. He was offered the state presidentship of the party, but Keshubhai cited poor health to back out.

Says a party insider: "It is now that the real trouble begins. If Keshubhai has his say—along with Vaghela, he is regarded as one who knows the party rank and file in every single district of the state—then the distribution of tickets could well be his. But if the vhp and Bajrang Dal cadres are given tickets by Modi, who is now trying to control ticket distribution, then Keshubhai will go into his shell again." The Congress, aware of the goings-on, has already put up a Patel, Narhari Amin, as its campaign incharge for the assembly elections. Modi, regarded as a dynamic poll campaigner himself, knows what all this means. The key question now is whether he will accelerate the process of his isolation or meet the challenges head on. Now to wait and watch.

EC On The Move