Fuel For The Lantern

The Godhra report's timing is all wrong. The Laloo angle can't be ignored. 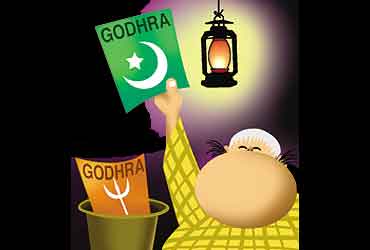 outlookindia.com
-0001-11-30T00:00:00+0553
Much as one would like to believe former Justice U.C. Banerjee's finding in his interim report, that the fire in the Sabarmati Express at Godhra on February 28, 2002, was 'most probably an accident', the regrettable fact is that neither the reasoning he has produced, nor the procedure he has followed leads unambiguously to this conclusion. As a result, what the report has done is to turn the Godhra tragedy into a political football that anyone can kick in any direction. The fact that 59 people died a gruesome death, of whom more than half were women and children, and that this triggered a mini-holocaust that has claimed at least a thousand lives, and destroyed twenty times that number, has receded into the background.

Justice Banerjee's finding is not convincing for two reasons. First, he comes to it after dismissing every other explanation that has been put forward so far. But to reject all other theories, he needed to make a truly exhaustive study of the evidence produced in their favour first. How could he possibly have done that without even giving a hearing to either the special investigation team (SIT) of the Gujarat police that has been plodding through the investigation, or the forensic laboratories that concluded that somewhere around 60 litres of petrol had been used? In fact, Justice Banerjee issued his interim report one day before a scheduled meeting with the SIT! What on earth made him do that?

Regrettably, one does not have to look very far for a possible answer. Justice Banerjee's one-man commission was set up in August by the railways minister Laloo Yadav and Laloo Yadav faces an election in Bihar in a few days. Bihar does not only have a large Muslim population, but much of it is so heavily concentrated in a few constituencies that it is impossible to win in them without their support. Laloo's purpose in setting up the commission could not therefore have been more obvious. He gave the commission an initial term of three months. When Justice Banerjee did not complete his report, it's term was extended by another three months. The most probable explanation for Justice Banerjee presenting his interim report a day before he met the SIT was that Laloo Yadav was running out of patience. But this raises the disturbing possibility that Laloo knew what the report would say even before it was written. It is hardly surprising therefore that the bjp has accused the railway minister of manipulating the inquiry for political purposes.

The second weakness of Justice Banerjee's report is that it does not provide answers to the many questions that the Godhra train conflagration has raised. By denying all other theories, he leaves us to conclude that the fire began somewhere in the middle of the rake, S-6, and not at one or both of the two ends. This conclusion is also supported by an independent panel of engineers whose report, confirming that the fire was an accident, appeared a few days after Banerjee's report. But if the fire started in the middle, and if it was set off by a match or a lighter, as the engineers surmise, then when volumes of smoke began to fill the compartment why did not a singe person open the doors and jump off the train? Why did even those sitting or sleeping at the ends of the coach not go into the adjoining compartments, S-5 and S-7, through the interconnecting vestibule?

The engineers' report does attempt an answer. It says that there must have been 150 people in the coach, which had been described as overcrowded when it left Ujjain the previous day. When the fire started, a huge number of people rushed to the two exits. This jammed them for long enough to allow the smoke to render many of them unconscious. There are two flaws in this theory. First, we do not know how many people got off the train between Ujjain and Godhra.The fact is that it was a sleeper and contained no more than 72 berths. This theory also does not explain why almost no one escaped. There were, after all, not one but three exits at each end of the coach, and the train was at a standstill. Last but not least, if there were 150 aboard and 59 were burnt to death, what happened to the remaining 90 passengers? Why were there not scores of interviews with survivors after the train reached Ahmedabad?

The theory that the fire began at the centre gets further weakened by the SIT's disclosure that the coach was built in 1993 and used fire-retardant and self-extinguishing materials. The engineers' report depends heavily upon the belief that the berths were filled with latex and built of plywood—both of which are highly inflammable. Since I do not know what fire-retardant materials are I cannot comment on this assumption. But its main weakness is that it cannot explain how a fire that started spontaneously at a single source, and created a huge volume of smoke, could have consumed the entire coach in just seven minutes. Its theory that the heat grew within the compartment till it reached the 'flashpoint' of the materials of which the berths were made is not credible at the best of times, and becomes even less so if the coach was furnished with genuinely fire-retardant materials. Smoke is emitted by partial combustion, and partial combustion by definition takes place at a lower temperature than the flashpoint needed for full combustion.

Justice Banerjee's report has performed valuable service by pointing out the sloppiness of the railways' follow-up to the fire. This may well prejudice any future trial of the alleged conspirators. But one should be wary of reading more than that into it.

How They Stack Up