From The Machan Up There 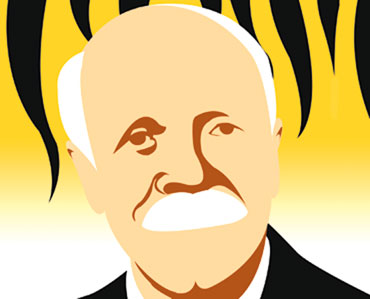 Illustration by Sorit
Namita Gokhale August 10, 2009 00:00 IST From The Machan Up There

Revisiting my hometown Nainital after a long gap, for a literary event at Jim Corbett’s old home, Gurney House, to celebrate his birth anniversary, I pondered the incongruities of his life. A child of Empire, Corbett moved to Kenya when India gained independence. Yet the people of Kumaon continue to consider him a local hero, and venerate the memory of their ‘Carpet Saheb’ with almost ideological intensity. As Justin McCarthy played evocative period fugues and waltzes on an electronic piano, the press and gentry of this crowded, polluted hill station remembered the gentle hunter who was also a pioneering conservationist with affection and nostalgia.

Born Edward James Corbett, on July 25, 1875, at Gurney House, he was the twelfth child of Mary Jane Corbett, whose first husband died in the Mutiny. Jim’s father Christopher William Corbett, a domiciled Indian, rose to become the postmaster of Nainital. In spite of enjoying the comparatively privileged lifestyle of a European household, Corbett was at home with his surroundings, and from childhood could speak Kumaoni as fluently as English.

The woods and forests around Nainital were teeming with wildlife—sambar, cheetal, kakar, bears, leopards and, of course, tigers. At home with the simple hill folk, he came to know and love the landscape and terrain, the flora and fauna of Kumaon. Young Jim was five when he first fired a gun, his target the hand of a school-friend of his brother! But then he moved on to non-human shikar. As the trophies mounted, a conflict of ideas began to germinate in the young shikari’s mind. During his frequent fishing expeditions in quest of mahseer in the Ramganga river, he began to dream of a wildlife reserve there. As early as the 1930s, Corbett was instrumental in moving the United Provinces National Parks Bill. The reserve, now the Corbett National Park, was at that time named after Sir Malcolm Hailey, a former governor of the United Provinces.

By then, Corbett had already started worrying about the fate of the tiger. In the ’40s, the viceroy, Lord Wavell, recorded in his journal that Corbett “...put the present tiger population of India at 3,000 to 4,000...in many parts of India tigers will become almost extinct in the next 10 or 15 years; his chief reason is that Indian politicians are no sportsmen and tigers have no votes.....”

The Man-Eaters of Kumaon was first published exactly 65 years ago—in August 1944. It cost Rs 5 in hardback. An American Book Club choice, it was made into a film by Hollywood’s Universal Studios. Corbett saw the screen version only once, and remarked that the tiger was perhaps the best actor. By the time The Man Eating Leopard of Rudraprayag was published in 1948, the hunter-conservationist had become a wildly successful writer, as well as a prescient advocate of the ecological cause.

Jim Corbett never married, and continued to live with his sister Maggie in his parental home. When they moved to Kenya, she wanted to replicate Gurney House there. Our hostess Nilanjana Dalmia’s grandfather bought the house from Corbett in 1947. In a letter that Corbett wrote to a local advocate, read out during the birthday reading, there was a reminder of his abiding suspicion of the post-colonial world. “There are about 1,20,000 Indians in Kenya...the richest, happiest Indians in any part of the world. Their day and night prayer is that agitators will not come here to set the government against them, as was done with the Indians in South Africa.”

The colonial paradox lies in the blurring of lines and the crossover of stereotypes. Corbett loved his birthplace and saved many human lives while risking his own in pursuit of man-eaters. Kumaonis are known for their loyalty, reciprocating affection without prejudice. That is why figures like ‘Carpet Saheb’ and ‘Ramji Saheb’ (Lord Ramsay, the legendary 19th century commissioner of Kumaon) remain a part of the living mythology of these hills.

Because he is remembered as a tiger hunter and conservator, it’s often forgotten that Jim Corbett was an exceedingly fine writer. His clear prose had empathy and compassion for both human and animal life. The descriptions of forests and wildlife were written with experiential knowledge and lucid lyricism. That’s why his books have endured, and continue to enthral new readers.

The very word ‘Corbett’ is now an adjective for the buzzing tourism and adventure sports industry in Uttarakhand. Hotels, tour groups, forest camps use it with abandon, even as the memory of a mild-mannered man who could lure tigers from the wild and engage in (almost) honourable single combat with them remains a part of the enduring legacy of the region.

Just One Shark In The Deep Blue Ocean