From Rock To Chanson 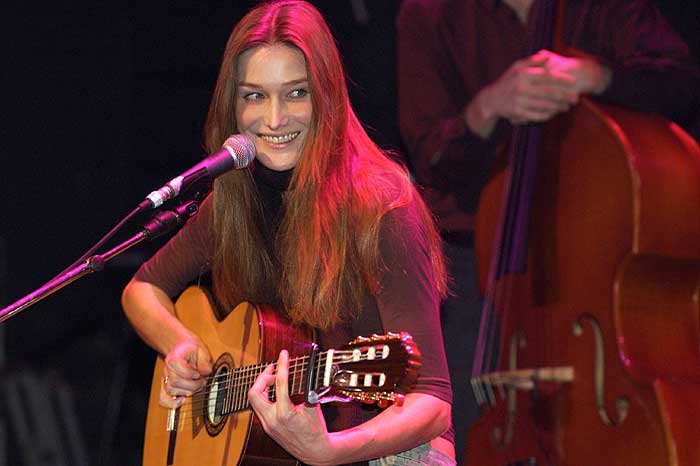 When the French President Nicolas Sarkozy and his wife Carla Bruni land in India for a three-day visit beginning December 4, the buzz around them is likely to recount, and compare, what was seen at their earlier overseas sojourns—beauty will trump substance, as will the first lady of France her husband. Sarkozy, diplomacy, the nuances of Indo-French relations, even the nuclear deal, India’s current obsession, are likely to drubbed in the tidal waves of Carla Bruni’s irresistibly overpowering aura. Call it the presidential peril of marrying a woman such as Carla; chic, ravishing, charismatic, who’s often,  and with every justification, described as the impeccable First Lady of France.

Critics—and there have been sneering sceptics—who believe impeccability to be an impossible ideal to match have perhaps missed out on the transformation, or reinvention, of Carla from the time the president married her three years ago. Earlier dismissed as a poupee, or doll, for her wild ways, Carla is now perceived as a thinking woman who combines beauty with brains, chutzpah with charm. Once the media jeered her, now they cheer her. French society is in Carla’s thrall, taking in every move of hers, from the cut of the dress she wears to the stilettos she has mostly forsaken so as not to appear (much) taller than Sarkozy, whose diminutive stature cartoonists never tire of skewering. Rated as the most popular first lady of France ever, opinion polls consistently show Carla ahead of the controversial Sarkozy on that front.

Carla’s metamorphosis began with her wardrobe. Ever since she walked into the Elysee, she stepped out of jeans and leather jackets (the ensemble of her Bohemian days) to grace her svelteness in robes and gowns, in sober colours ranging from navy blue to beige and grey. The makeover more than worked for Bruni. So when she accompanied Sarkozy to London in 2008, wearing a grey Dior coat and sporting a ’60s hairstyle, the British and American press competed to manufacture superlatives, saying she rekindled memories of Lady Diana and Jackie Kennedy. Bruni, they concluded, had the same three attributes as the other two—strict elegance, exquisite taste and undeniable class. 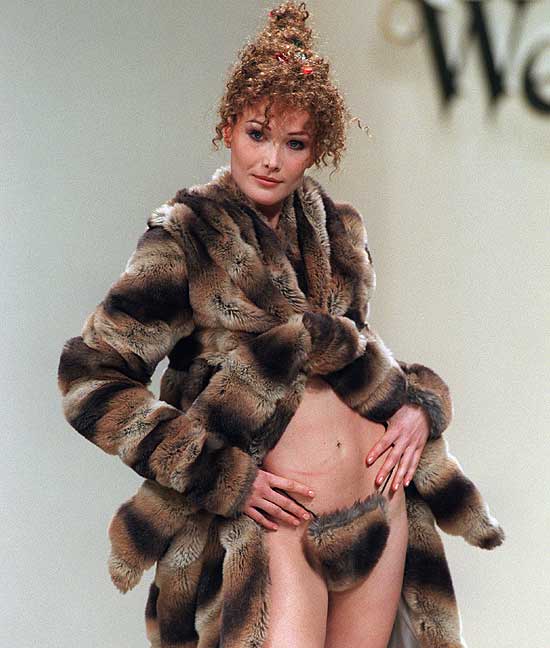 Along with her sartorial transformation, change came to her political views too—she swung from the fringes of the Left to the hard-right position Sarkozy seems to occupy currently. Before their wedding, Bruni was openly critical of Sarkozy, particularly his ‘selected immigration’ policy, and didn’t vote him in the 2007 presidential election. Perhaps it was expediency—you can’t possibly have the lady in Elysee Palace taking pot shots at the president. As Besma Lahouri, the author of Carla, une vie secrete, an unauthorised biography which hit the stands this September, notes, “The Carla that the French see today is not the real one. In two years, she has entirely rewritten her image, and also broken off completely from the Left.”

Carla’s political views changed with her change in style—a shift from the Left’s fringes to the hard right.

But under the Dior coat une tendre coeur beats with empathy for the victims of HIV, tuberculosis and malaria, the battle against these diseases taking her to two of the poorest African nations—Burkina Faso and Benin. In December last year, she played a crucial role in securing the release of two young Frenchwomen from prison in the Dominican Republic, where they had been sentenced for eight years on drug trafficking charges. And when she wrote a letter to an Iranian woman sentenced to death for adultery, saying France will not let her down, the country, in her best republican tradition, adored her for incurring the wrath of Tehran. An Iranian newspaper called her a prostitute who wouldn’t know the first thing about societal morals. For the French, with their glorious tradition of defiance, the rage of a benighted country occasioned celebration.

In April 2009, Carla created the Carla Bruni-Sarkozy Foundation to provide the poor access to culture and knowledge. In February this year, her foundation committed nearly 1.5 million euros over the next three years, so that deprived children could buy books, participate in cultural and other educational activities. In the manner of most celebrities, she has been engaged in animal protection rights, leading the anti-fur movement from the front.

Animal and human rights work, and a prolonged stay in the Elysee notwithstanding, stories about her dalliance with famous personalities continue to surface with regularity, though all subjects denied such reports outright. The Parisian social circuit was rife with speculation earlier this year about the first couple’s imminent split. This episode of marital discord was ripe with irony. It seems Carla was angry at her husband’s liaison with minister Rachida Dati, who ultimately had to resign to become a member of European Parliament, literally moving away from Paris. It’s said it was Carla who scripted the shift, quite astonishing for a woman who, in her modelling days, had a string of celebrity partners—Eric Clapton, Mick Jagger, Donald Trump among others—and who is still seen as a sexual predator in some quarters. 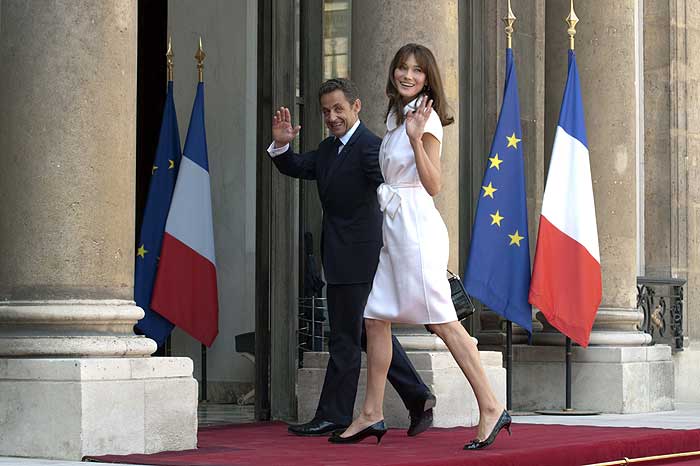 This latter image is helped along by her own pronouncements. Even after entering Elysee, Carla said her liberal views on life, love and monogamy had not changed. “Love lasts a long time, but the burning desire two or three weeks. I am monogamist from time to time, but I prefer polygamy and polyandry,” she famously remarked.

Add to this Lahouri’s unauthorised biography, in which her former partners are quoted comparing her to a tigress and a female Don Juan who loves and lives for pleasure.

Carla says she has a certain influence over Sarkozy, but it doesn’t extend to his work as president. “In other areas, without a doubt,” she says, without naming any. In controlling his diet, for example? “No. Not at all. I am myself not moderate and hence I don’t impose any diets on myself or my family. He does what he wants alone, he is big, is he not?” she responded in a 2009 interview.

The stay in Elysee has also entailed sacrifices—for instance, she has put on hold her music career, fearing it may not go down well with her role as first lady. But it is simply impossible for her to curb her insouciant spirit, her admirable joie de vivre. For instance, she couldn’t resist Woody Allen’s offer to act in his film. She explained, “I am not an actress, maybe I will be terrible. But I cannot miss such an opportunity. When I will be a grandmother, I can say that I have done a film with Woody Allen. I find this absolutely fantastic.”

It’s a blend of usual femininity and diva-esque allure that has the French hopelessly intoxicated. Just the person to pose before the Taj Mahal.