From Dubai To Dalal St.

Forget bulls and bears, it is a beast of a different kind that has regulators worried—the underworld don 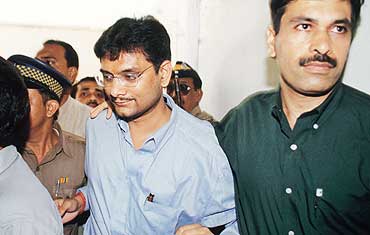 Listening to D.R. Mehta and his analysts, you get an impression that the Securities and Exchange Board of India (SEBI) chief and his men would soon wipe off the Rs 2,000-crore stock-and-banking scam triggered by disgraced operator Ketan Parekh like so many cobwebs on the wall. But scratch the surface and Mehta admits that this time, more than insider trading and price-rigging, the regulatory authority is worried about the massive presence of underworld slush funds in India's financial markets.

He refuses to be drawn into the issue, except saying the arrest of film and diamond moghul Bharat Shah set the cat among the pigeons and prompted a full-fledged probe into underworld involvement in the stockmarkets. Says Mehta: "Besides films, we suspect hawala money is being routed into the market. But we don't have any proof because all transactions are made through cheques and on paper everything's perfectly legal." He adds: "Besides, we are not the authority to investigate such an issue."

What is the modus operandi? SEBI officials admit that over the last one-and-a-half years, there have been countless reports of Indians routing their funds through the hawala circuit to fictitious companies in London, Singapore, Mauritius and Dubai. These firms, in turn, re-invest this money through foreign institutional investors (FIIS) and bse brokers. One just needs to route the funds through sub-accounts linked to FIIS.

"The 1992 Harshad Mehta scam arose because of problems in portfolio management accounts. But this time, one needs to seriously probe the role of FIIS. But neither the finance ministry—including the Reserve Bank of India (RBI)—nor the external affairs ministry wants to probe this angle," say sources. The issue was first raised by former SEBI chief G.V. Ramakrishna who wanted FIIS to avoid the sub-account route (FII sub-accounts don't need SEBI registration) to operate in India. "His intention was to invite only those who are regulated in their home country. But today money can easily flow in through the sub-account route," sources add.

They also say that it was in March last year when the Enforcement Directorate (ED) and I-T department submitted a detailed note on the issue to the finance minister but Yashwant Sinha refused to take any action, ostensibly because this could make India look foreign-investor-unfriendly.

SEBI officials admit they're completely perplexed by the investments made by a large number of FIIS. For instance, Credit Suisse First Boston picked up dsq shares worth Rs 82 crore in January, and Rs 40 crore in February. Obscure FIIS Banco de Sardegna and Fledgling Nominees picked up hfcl shares worth Rs 50 crore and Rs 37 crore. There's more. An FII by the name of gmo Trust picked up shares worth Rs 59 crore in Global Telesystems in January. Also, investments by a Singapore governmental body registered as an FII in some of these controversial stocks linked to Parekh. "We are no one to prevent such investments but it's baffling. More so because all FIIS claim to have solid research wings which routinely advise them on possible investments," says a SEBI official, adding that the matter has been raised on many occasions with the finance ministry but there has been little response.

But now, things could change dramatically. Investigating agencies admit having collected detailed evidence of corporate and stockbroker links with the underworld. Late last year, Mumbai Police's Crime Branch and the IB questioned several sharebrokers on charges of rigging prices of ice shares, most with weak fundamentals.

It's a different matter that the files never moved out of the finance ministry till the KP episode rattled the capital markets. And now, the Mumbai branch of the cbi claims it has zeroed in on a number of issues which will help the investigators flush out those with underworld links in the country's financial markets.

"Parekh has admitted he knows people with underworld connections. We are probing the matter," says a top cbi official. Explaining the underworld's interest in the markets, he adds: "There's a lull in the city's construction activities and related businesses. Besides, film financing—for the time being—is risky for the underworld. Stockmarkets offer an easy alternative." The official, who requested anonymity, said the agencies are not only targeting brokers but also zeroing on promoters of tainted firms. Says he: "We're also looking at brokers backing TV channels, software production houses and filmmaking companies." The police says brokers found guilty of investing funds on behalf of the underworld can attract severe punishment under the new Maharashtra Control of Organised Crime Act (under which Bharat Shah and film producer Nazim Rizvi were arrested).

Agrees suspended bse chairperson-designate Deena Mehta: "It was such dubious dealings of a handful of brokers which prompted the bse to set up a special committee of 50 chartered accountants last year to inspect the account books of all listed brokers. Initially, we never looked into the source of funds. After all, we should not be bothered if the transactions are clean. And the hesitancy was also because it was not exactly our jurisdiction. But of late, there have been serious indications of slush funds penetrating the stockmarkets. We didn't think twice. We have also told the investigating agencies to look into the role of the promoters. No insider trading can be done without the active connivance of the promoter."

She should know. Sample some of the loops the agencies are working on now:


Says Kirit Somaiya, bjp MP and president of the Mumbai-based Investors' Grievances Forum: "The underworld is firmly entrenched in the stockmarkets.Both SEBI and bse are aware of a large number of brokers with strong links with the filmworld. The link between the entertainment industry and the underworld is well known, but now the capital markets are proving a relatively safer haven for them to dupe the gullible investor." Somaiya's petitions to probe the underworld connection in the stockmarkets have been pending with the finance minister for more than a year now.

But with SEBI and bse taking evasive action, does the finger point at the RBI? Senior RBI officials hotly contest such charges, saying it clears the application of a particular FII only after it completes the stipulated formalities laid down by SEBI through its single-window clearance. Says a top RBI official: "It's actually the role of the external affairs ministry to check out treaties between India and such countries from where FIIs are operating. And why underworld, look at the way cooperative banks function in the country! RBI just does not have the manpower to tackle such crises. So scams are inevitable."

In a report (drafted by a high-powered committee on urban cooperative banks) submitted to the finance ministry last year, the RBI admits the situation is almost out of control: "The existence of a large number of unlicensed banks has become a cause of concern. As on September 30, 1999, a total of 181 banks were still unlicensed entities. Of these, 97 continued to be unlicensed for over three decades. The existence of such large number of unlicensed banks places the RBI in a state of regulatory discomfiture," says the report.

"RBI officials have warned state governments many times of dubious dealings of such cooperative banks but the ruling parties defended the banks and scuttled any probe. In the case of Madhavpura Bank, we warned the Gujarat government way back in 1998 after an investor forum highlighted that the bank's management was siphoning off funds. But the government took no action. So how do we know whose money has come in and who has made a killing at the cost of an innocent investor?" the director asks.

The irony of the case lies here. In what appears to be an ideal pass-the-buck syndrome, not many regulators of the country's financial markets (including the government) are interested in probing sources of slush investments. And unless that is done, the problem is likely to continue. At the cost of the small investor, of course.

The Real Issue Issues Forth