From Bud To Flower 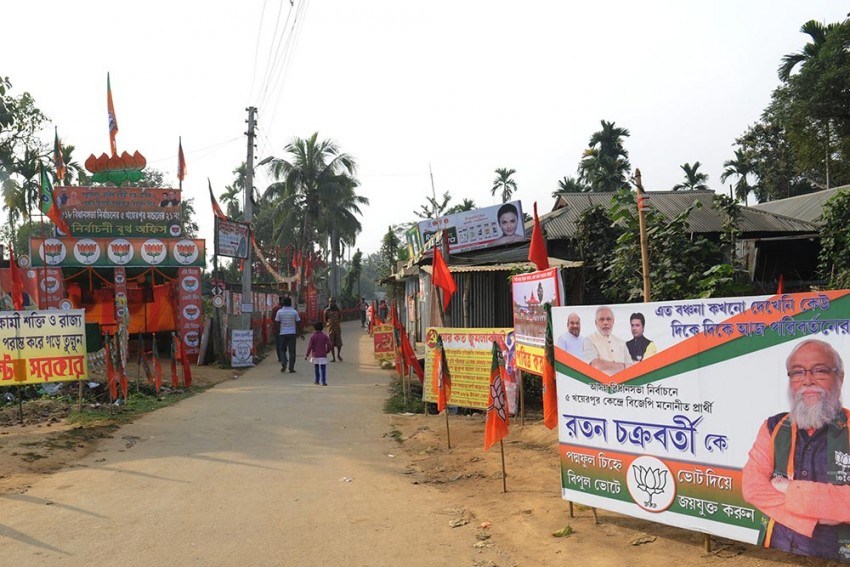 Mela Mood
Flags of BJP and CPI(M) deck up a street of Agartala
Photograph by Sandipan Chatterjee
Bhavna Vij-Aurora February 15, 2018 00:00 IST From Bud To Flower 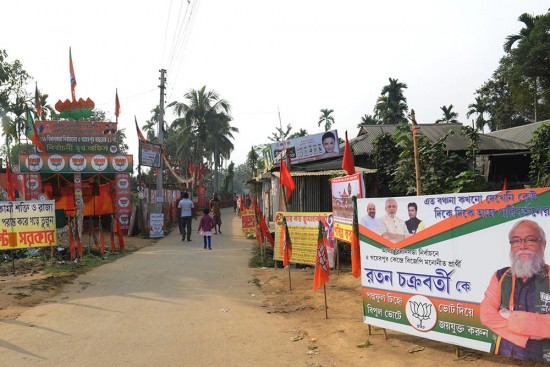 There are no signboards showing the way to Sewa Dham, the state headquarters of the Rashtriya Swayamsevak Sangh (RSS), about 15 km outside Agartala. An almost unnoticeable cut on the road and a short drive thr­ough mounds of dust lead you to the office of the right-wing volunteer organisation—in Purba Champamura village of Khayerpur locality.

Local people say there was an un-tarred road to the Sangh headquarters—and it was dug up in last December ahead of a visit by RSS chief Mohan Bhagwat. The 67-year-old sarsanghchalak stayed there for three days, and said that all people living in India are Hindus. “We don’t know who dug it up, but it was done overnight,” recalls Sudipta Das, a resident. “We heard that CPI(M) cadres did it. Only the state machinery could have been so quick. There were deep pits that make entry and exit from Sewa Dham almost impossible.”

Immediately after, RSS men, including local boys and tribals, tried to fill the pits. That worsened a brutal battle between the RSS and workers of the ruling CPI(M). Finally, earthmovers came in. “We heard that Delhi (central government) arran­ged for the equipment and people from NBCC (a Navratna PSU) came to do it,” Das adds. The entry and exit from Sewa Sham was made possible, but the road has still not been restored.

From zero presence to being the Left’s only rival has not come easy for the BJP, which built up its cadre brick by brick.

A shakha was in progress at Sewa Dham around 6.30 in the morning. With huge portraits of Swami Vivekananda and M.S. Golwalkar overseeing, a dozen boys go about their usual drill. Aged between 10 and 18, they unfurl the saffron flag, do physical exercises, render the Ekatmata stotra (in Bangla) and take the Namaste sada vatsale pledge for a Hindu rashtra before following it up with the three-step RSS salute. The flag is then ceremoniously folded back, as the boys march away. Usually there are more participants in the shakha, but with asse­­mbly elections drawing closer, most of them have spread out. They are busy working for the victory of the BJP—the political party in the Sangh parivar.

The shakha at Sewa Dham is one of the 350 which run on a regular basis in Tripura that goes to the polls on February 18. Till the last assembly elections in 2013, the RSS’s presence was limited to about 100 villages, and the BJP voteshare was a meagre 1.54 per cent. Rajesh Deshkar, RSS sewa pramukh for the seven North­eastern states and in charge of the conduct of the shakha at Sewa Dham, doesn’t want to relate the growth of the BJP in Tripura to that of the Sangh. “Society is changing; so are its expectations. This change is responsible for the rise of the BJP in different parts of the country. And it is because of the political change that people want to understand the Sangh better and are coming to the shakhas in larger numbers,” says Desh­kar, originally from Nagpur, but working as a pracharak in the Northeast for 30 years. It is high time, he adds, the region woke up to the BJP and considered itself a part of the ‘Hindu rashtra’.

Last time, the BJP had contested 50 of the 60 seats, polling 33,808 votes overall and winning nowhere. Its candidates lost deposit in all but two, while the CPI(M) won 49 seats, CPI one and the Congress 10. Then, in the run-up to the 2014 Lok Sabha elections, PM candidate Narendra Modi had his only flop show in Agartala: the BJP rally was dotted with hardly 7,000 people. The 1972-formed Tripura, like other states in tribal Northeast, had never really been important for the saff­ron party. Despite a substantive RSS presence in the rugged region, the BJP seldom thought of using the cadres as a force multiplier. That was then.

Now, as tiny Tripura gears up to vote, the BJP has emerged as a serious challenger to the CPI(M) that has been running governments in the state for a quarter century—the last two decades of it with Manik Sarkar as the chief minister. Despite the high anti-­incumbency disenchantment with his government, the 69-year-old’s austere personal image remains largely undamaged. The Congress as the main Oppo­sition has been nearly wiped out. Seven of that party’s 10 MLAs have switched to the BJP after a brief sojourn in Trinamool Congress (TMC). Another has joined the CPI(M), leaving the grand old party with only just two legislators. The TMC too has a negligible presence in the state. Some flags and banners of its supremo Mamata Banerjee appeared near the airport just before a few senior party leaders landed from Calcutta for some perfunctory campaigning.

From zero presence to being the only adversary of the deep-rooted Left has not been an easy task for the BJP. It had to build up its cadre brick by brick. Currently engaged at the ground level are an estima­ted 50,000 workers of the BJP, RSS and other affiliates like the Vishwa Hindu Parishad, Bajrang Dal, Bharatiya Mazdoor Sangh and the Vanvasi Kalyan Ashram. Nearly 5,000 workers have been brought from Assam and other neighbouring states. Plus, trainers like Deshkar who are senior RSS functionaries. The aim is to reach the last voter to take on the CPI(M) at its own game of man-to-man marking.

Setting up a direct fight with the CPI(M) has taken the BJP more than three years of hard work. It not just relied on the exis­ting RSS base; the party also drew on the pracharaks with vast experience of working in the region. One of the first things Amit Shah did after taking over as party president in November 2014 was to depute Sunil Deodhar, a former RSS pracharak with experience in the Northeast, in charge of Tripura as its prabhari. 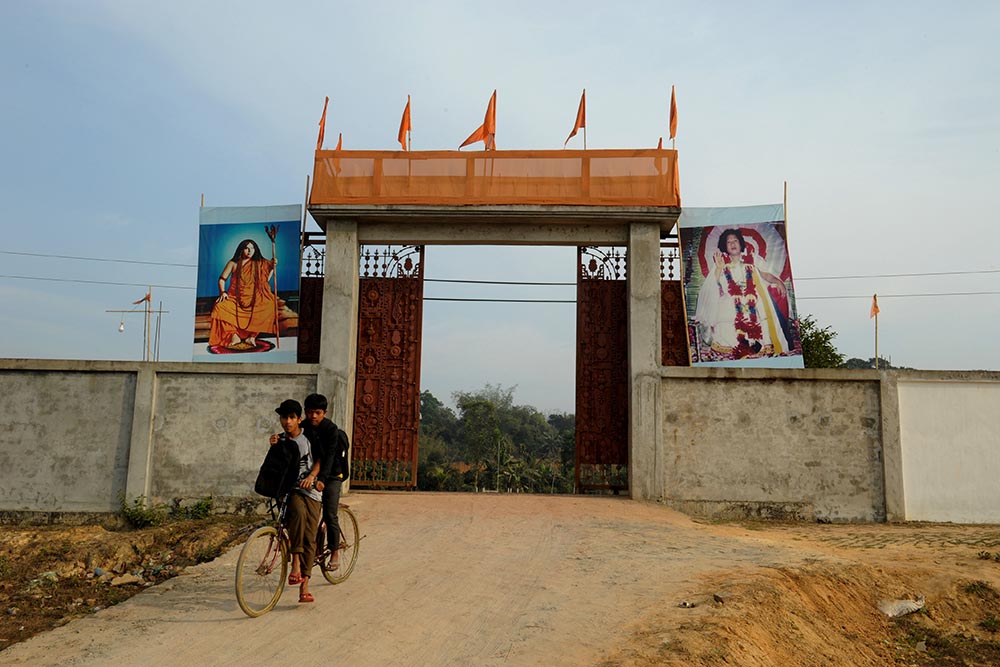 Entry gate of the RSS state headquarters, 15 km off Agartala

Deodhar, 52 and staying put in Tripura for past two years, went about the mammoth task of building the organisation in the state from scratch. He got his former RSS apprentices Biplab Kumar Deb and Tinku Roy as BJP state president and state youth chief respectively. Young and flashy Deb is now the “unofficial” CM face of the BJP. Under them, Deodhar started making various morchas: women morcha, yuva morcha, SC and ST besides for min­orities and farmers. They worked from the top to reach the grassroot level. After the various morchas came the 60 vistaraks—the younger Sangh functionaries given the party’s charge in each asse­mbly—and the panna pramukhs (literally the page in-charges) responsible for the 60-odd voters on the one page of voters’ list allotted to each.

“When we started out, the presence of Sangh in Tripura was negligible compared to other North-eastern states like Meghalaya, Assam and Manipur,” Deo­dhar tells Outlook. “Maybe the focus was more on other states since they had substantial minority population. In Tripura, Hindus form majority. Somehow, the Sangh couldn’t establish roots here but it has grown fast in last two years.” Photograph by Sandipan Chatterjee
BJP state head Sunil Deodhar (in pic) has formed several morchas that work from the top to reach the grassroots.

On it part, the CPI(M) adm­its that some of the party leaders and workers have been involved in corruption. “We take prompt action against them. It is the RSS and the BJP that have been using money power to woo voters and influence them with rhetoric,” the party’s state secretary Bijan Dhar  tells Outlook. Acco­rding to ano­ther CPI(M) leader, the BJP is taking adv­antage of the sense of being wronged that the tribals have been playing on the sentiment to create deeper fissures bet­ween them and the Bengalis who comprise 68 per cent of Tripura’s 45 lakh population.

It is more than apparent that the CPI(M) is shaken by the exponential growth of the BJP in such a short time. In his rallies, CM Sarkar takes pains to tell the electorate that they should not vote for the “divisive” BJP that can “destroy the moral fabric of the state”. The BJP’s main target is to destroy the Left, he adds.

There, Sarkar is not way off the mark: Tripura is only one of the two remaining Left-ruled states (the other being Kerala). A win in Tripura, if it happens, will all the more satisfy the BJP since it is a dir­ect ideological fight in the state. 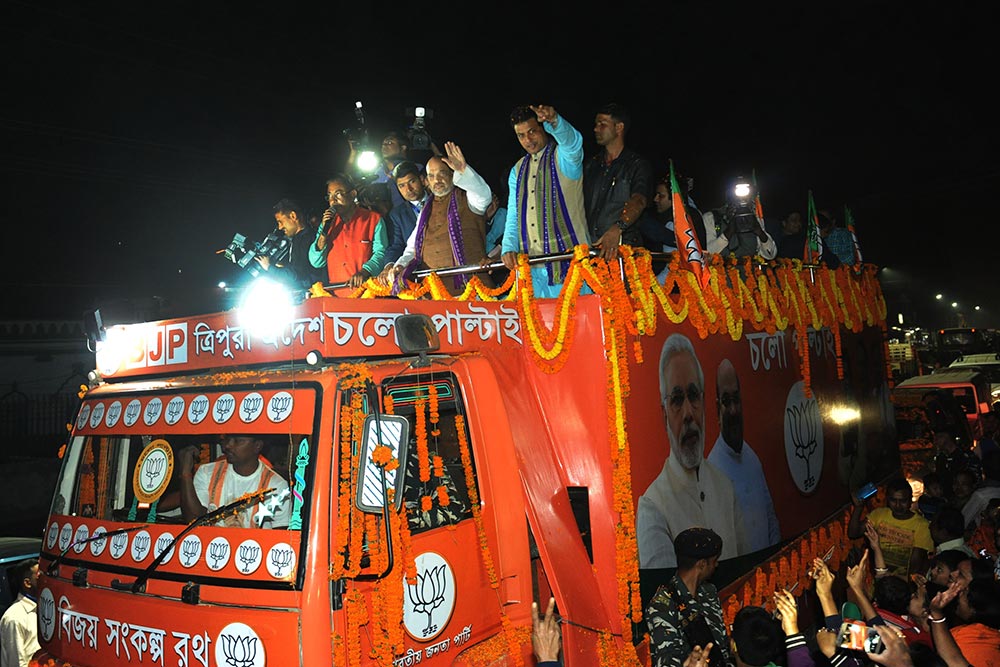 While the RSS is not that strong in the state, the BJP’s Deodhar says the Van­vasi Kalyan Ashram had been a presence in the tribal areas. The party is paying special attention to the tribal voters who constitute a third of the state’s population and have largely remained under-developed. To make a dent in tribal areas, the BJP has allied with the Indigenous People’s Front of Tri­pura (IPFT), a party with a presence in the state’s tribal belt. Even as CM Sar­kar dubs this alliance “Machiave­llian”, alle­ging the IPFT has linkages with an ext­remist group, the saffron party is upbeat about its prospects in the tribal belt that has traditionally voted for the CPI(M). North Eastern Democratic Alli­ance convenor Himanta Biswa Sarma played a crucial role in stitching up the alliance.

Sarma, an Assamese, has the numbers on his fingertips. Of the total 60 assembly seats, 20 are reserved for the Scheduled Tribes. The BJP is contesting 11 of those and ally IPFT nine. He ridicules allegations against the IPFT. “The sense of deprivation is the strongest in the region. They kept voting for the CPI(M) since there was no alternative. Now they have an alternative and are looking at the BJP-IPFT with great exp­ectations,” Sarma tells Outlook. “We will win 15 of the 20 tribal seats. And get a total of 37-42 seats.” Photograph by Sandipan Chatterjee
At poll rallies, CM Manik Sarkar calls for votes against a “divisive” BJP that can “destroy the state’s moral fabric”.

Sarma may be exaggerating, but the tribal population is definitely looking for a change. A visit to Charilam (ST) seat reveals the story of neglect: an unfinished bridge, missing roads, a school without teachers and paucity of potable water. “I became disillusioned with the CPI(M) and its broken promises,” says BJP district vice-president Amulya Debbarma, who joined the party last year after 25 years with CPI(M).

The BJP also tried to rope in young Pradyot Bikram Manikya Deb Burman from a former ruling family to improve its chances in tribal areas. The prince, who’s working president of the state Congress, is believed to have refused despite being offered a Rajya Sabha seat. Speaking to Outlook, he merely smiles and refuses to confirm the BJP offer. “There was something but let’s just say, I am still with Congress,” he says, and does not believe the BJP is going to have it easy.

Deodhar says MNREGA figures show areas more than entire Tripura having been dug in the state to make ponds. “By this standard, we (third-smallest state in the cou­ntry) should have been under water,” he says, trying to take the sheen off the Manik Sarkar government. After a union rural development ministry directive, Tripura has managed to geo-tag only seven per cent of the works it had claimed to have completed,” he adds.

Vikas Debbarma of Jortali village in Charilam claims to have seen contractors paying off the CPI(M) cadres and disappearing without completing work. “The time has come for change. We are willing to give a chance to the BJP,” he says.

By Bhavna Vij-Aurora in Agartala