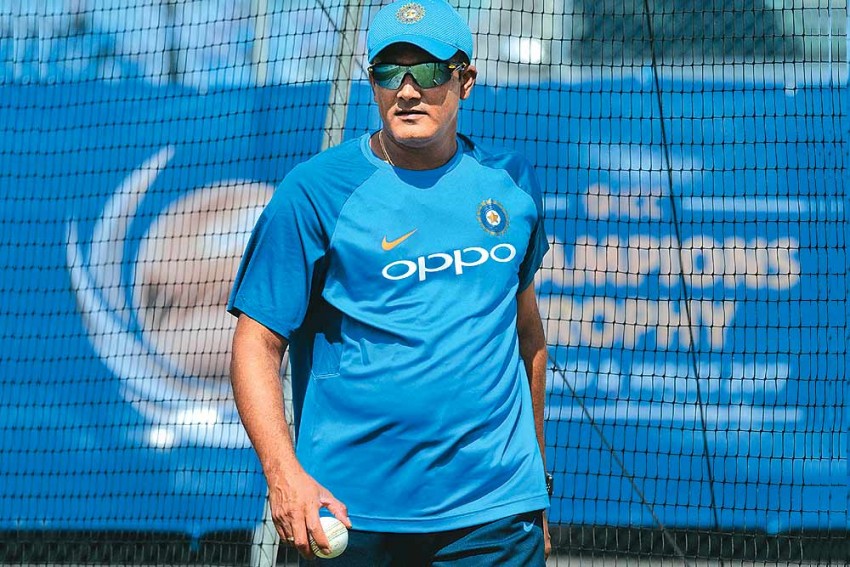 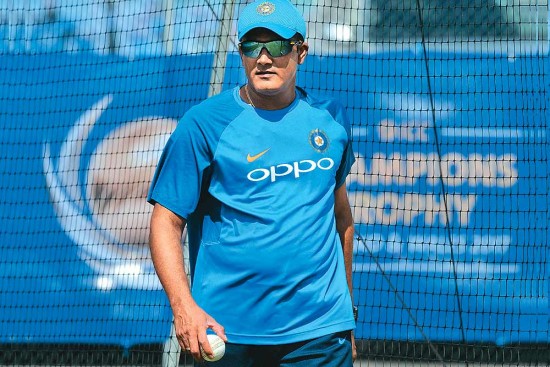 The Indian team started its def­ence of the Champions Trophy title in emphatic fashion on June 4. Its punishing win over Pakistan showed two things: that the outfit, particularly its batsmen, was far superior in planning and execution of a new brand of cric­ket, and that the ongoing Virat Kohli-Anil Kumble issue had little eff­ect on them. Although Kohli has claimed that there were no problems in the Indian camp, BCCI insiders say off-the-record (though Ajay Shirke, who as Board secretary was involved in appointing Kumble as India coach last year, has said so directly) that the skipper didn’t exactly like the former spinning great in the role of India coach from day one.

But the smashing win over Pakistan has stymied the disquiet for a while. At the same time, it seems the process to pick the coach has been tweaked a bit. Initially, the interview of the six candidates in the fray—Kumble, who applied separately after the BCCI gave him a direct entry, Virender Sehwag, Lalchand Rajput, Tom Moody, Dodda Ganesh, and Richard Pybus—were to be conducted on June 5 and 6. When asked on June 8 about the interviews, three of aspirants told Outlook they hadn’t been told of the date. Vinod Rai, chairman of the Supreme Court appointed Committee of Administrators (CoA), which is overseeing the coach’s appointment, was in England this week and reportedly met the players and the coach.

Kumble’s interview may take place only after India’s Champions Trophy league matches end on June 11, while there is a likelihood that others may be interviewed earlier than that. All three members of the BCCI’s Cricket Advisory Committee (CAC)—Sachin Tendulkar, Sourav Ganguly and V.V.S. Laxman—which will interview the candidates, are in England, and may interview candidates over Skype.

The coach’s appointment is at best an administrative or operational issue, which ideally should have been dealt with as routine. But the old guard at the BCCI is so desperate to hold on to its turf—despite the daily lashings by the Supreme Court judges, while hearing the Lodha committee’s case for it to ref­orm—that it has made it into a divisive issue, enlisting support of all the old camps in the venerable Board. 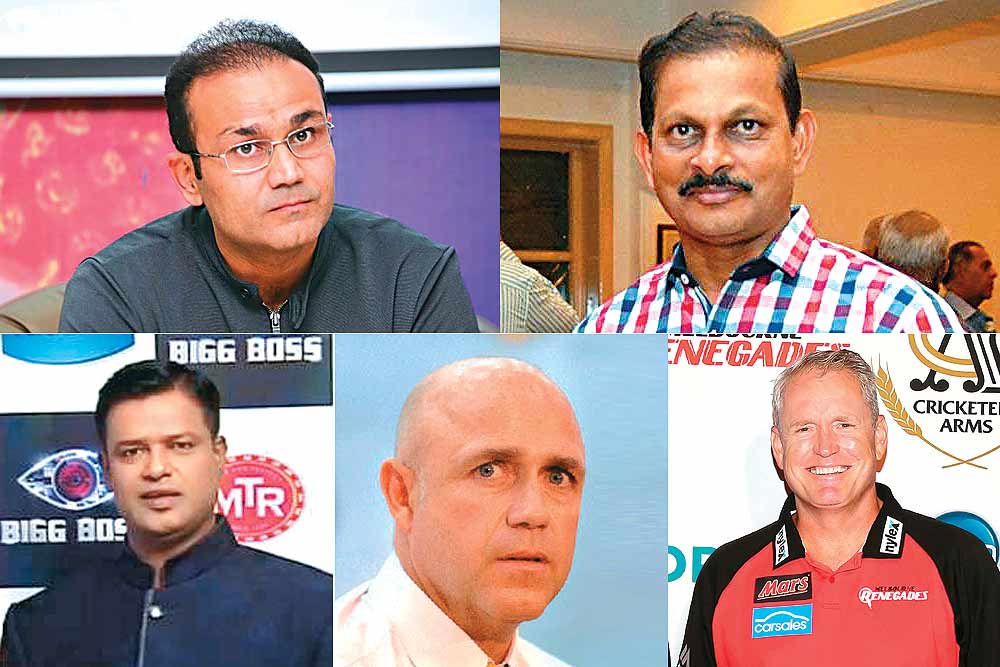 Applicants to the post of the coach of Team India include (clockwise from top) Virender Sehwag, Lalchand Rajput, Tom Moody, Richard Pybus and Dodda Ganesh

Of the six candidates in contention, Kumble seems heads and shoulders above the others. His near-perfect rec­ord in his first year of coaching a national team cannot be ignored. Under his guidance, India won 12 of the 17 Tests, drew four and lost only one. In ODIs and T20s, too, India has been on top. His calm demeanour and temperament are his biggest pluses, and he rarely loses his cool. He is the perfect foil to the occasional volatility the aggresive Virat Kohli is prone to.

In terms of achievements as coach, Lalchand Raput and Tom Moody have impressive CVs. Rajput, currently nat­ional coach of Afghanistan, was the Indian team’s coach in 2007-08, when M.S. Dhoni’s team stunned all by winning the maiden ICC Twenty20 World Cup in South Africa. The 55-year-old Level-III certificate holder has also been coach of India A, India under-23, India under-19 and India under-15. He proudly points out that the under-19 team never lost a series, and won all five overseas tours. A low-profile man, the BCCI never gave Rajput enough opportunities with the senior team when he deserved it.

A two-time World Cup winner with the Aussie team, Moody’s biggest achievement is in taking Sri Lanka to the 50-over World Cup final in 2007, when the islanders lost to Australia. Now, he is the head coach of IPL SunRisers Hyderabad, whom he guided to the title in 2016 and missed an encore by a slim margin last month. Moody had applied to be the India team coach in 2005 and last year as well. In 2005, he lost out to Greg Chappell and to Kumble last year. At present, he is Director of Cricket of the BBL team Melbourne Renegades.

Pybus, 52, is a South African who guided Pakistan to the 1999 World Cup final, where they lost to Australia. He also coached Bangladesh, and before that the Titans and Cape Cobras teams in his native South Africa, after switching to coaching quite early after injuries restricted his playing career. He is currently Director of West Indies Cricket. Dodda Ganesh, 43, is the rank outsider among the six aspirants. He was Goa coach in domestic cricket for four years, starting in 2012, and also coached the BCCI-National Cricket Academy’s under-16 and under-19 teams.

But the coaching controversy has eclipsed the much more important issue of overall reforms of the BCCI that the Supreme Court has ordered, based on the recommendations of the Lodha Committee, and which has not moved forward one inch. The inordinate delay has happened at a time the CoA has been caught up in many administrative matters, while the three surviving BCCI off­ice-bearers and many state associati­ons have been raking up so-called amb­iguities in the panel’s recommendations. This, and the resignation of Ram­ac­h­andra Guha from the CoA on May 28, has further pushed back reforms.

The CoA claims the delay has happened as the SC is yet to clarify a few key issues, including the biggest bone of contention, the answers to FAQs (frequently asked questions), that the Lodha Committee issued to clarify matters mentioned in its report, after receiving an avalanche of emails/representations seeking clarity over certain things. Now, the three BCCI office-bearers and some state associations are nitpicking over some of the recommendations, presented as seeking ‘clarity’—a move that is seen as a ploy to deliberately delay reforms, that will help ineligible officials to extend their reigns.

The Lodha panel’s recommended reforms haven’t happened as the CoA is busy with other matters, while BCCI and state bodies have raked up so-called ambiguities.

Former CJI R.M. Lodha, who headed the high-powered panel that recommended wide-ranging changes, is disappointed at the delay. “These are all excuses,” Lodha tells Outlook. “I can understand if the Supreme Court has said ‘hands off, don’t implement our order till we say yes’, not otherwise. These people will keep on making applications [before SC] and creating complications. This [FAQs] can’t be an impediment. People who are not interested in reforms will continue to put impediments. The primary task given to the CoA is to implement the order. That they should supervise the affairs of the BCCI is only incidental.”

The CoA counters this by saying that its hands are tied and that unless the Supreme Court passes clear instructions it cannot go all out with reforms. After a few 70-plus cricket officials, like Tamil Nadu’s N. Srinivasan and his Saurashtra counterpart, Niranjan Shah, continued to attend BCCI/committee meetings/SGMs, the CoA moved an app­lication in the SC, seeking clarifications which the court has said it will hear in July. “The court has so far not told CoA whether the FAQs are valid or not. The committee can’t take a step forward without a decision on FAQs,” says a source close to the CoA. He says none of the state associations—barring Vidarbha—and BCCI office-bearers view these questions agreeably.

But what’s all the fuss about these FAQs? Why doesn’t the BCCI want the various people concerned to clear their doubts about Lodha’s recommendations? “A law or a report may not be understood by all, and that’s why we were flooded by questions from the BCCI’s states associations as well as individuals. That’s how those questions were answered. The FAQs are actually our report which has been approved by the Supreme Court and it has to be implemented. It’s the task of the CoA and, hopefully, they will take it forward,” says Lodha.

Reforms in cricket administration were to start from state associations accepting and implementing the changes in their constitutions, and culminate in the election of a new set of officials at the BCCI. “Take for exa­mple, the conflict of interest. There is an entire chapter in our report that has been accepted by the SC. But things have not made the desired progress. As Mr Guha has written in his letter, it appears things were going on smoothly internally within the committee. We don’t know actually what have been the true reasons,” says Lodha. Suddenly, all that is on hold for now. All eyes are on the who the next coach will be, as that will give an indication of who the top boss at BCCI really is.

A Deal On The Flip Side