Freedom To Soar For B-Schools 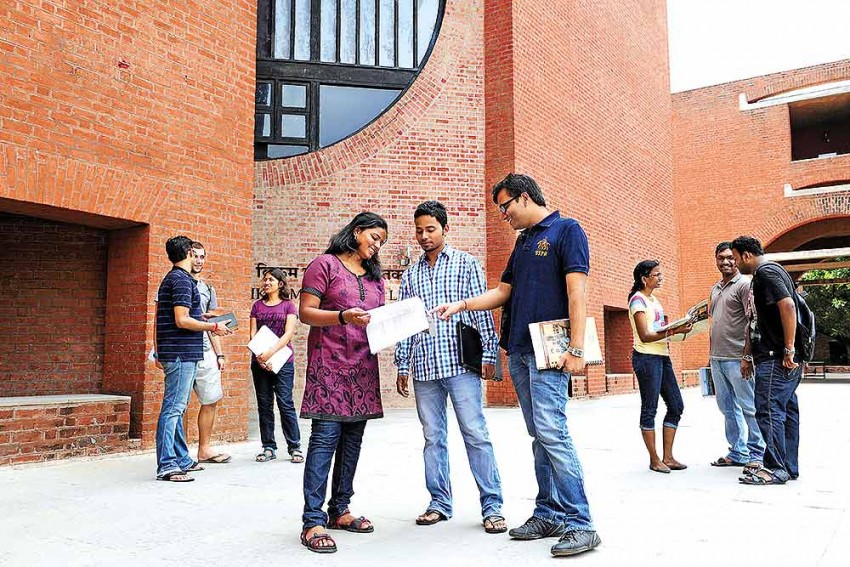 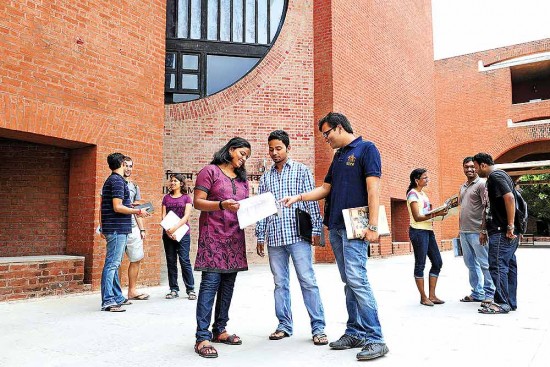 Amongst all the top institutions of higher education in the country, the Indian Institutes of Management (IIMs) are perhaps a rare success story when it comes to learning and research as well as career prospects.  IIM graduates are highly confident and much in demand, and almost invariably command handsome salaries.

Last week, as Japanese prime minister Shinzo Abe visited India, IIM Bangalore launched the first-of-its kind India-Japan Centre. Promoter-­industrialist Vikram Kirloskar and other industry giants have overwhelmingly appreciated the synergy of ideas on a common platform that can benefit both nations. Lauding the timing as being “perfect”, Kirloskar observed that it was not just about understanding ­management practices but also “understanding of culture, psyche and thinking” which would help “improve bilateral business in a big way”. According to chairperson of the Board of Governors of IIM-B Kiran ­Majumdar-Shaw, it would “contribute to the shared ethos of the ‘Resurgent Japan, Vibrant India’ agenda”.

Now the government is taking a step which, it is hoped, will help the ­institutes become truly competitive ­internationally.  The IIM bill, which was passed in the Lok Sabha in August, will grant an unprecedented degree of ­autonomy to each individual institution once it ­becomes operational; that is, once it passes in the Rajya Sabha and ­receives the ­President’s assent.

As per the terms of the bill, the existing 20-odd IIMs will be relieved of all government ‘­regulations’; they will be able to set their own standards in order to compete with world class institutions, attract foreign faculty and students, and achieve the pinnacle of success. IIM Udaipur director Janat Shah tells Outlook, “It is a huge jump for higher education in India because no ­institution has got this amount of ­autonomy as envisaged in the bill. It is a directon for Indian education.”

The bill will make two major changes. First, the IIMs, which are currently ­authorised only to offer diplomas, will become ­degree-awarding institutions. Although an IIM diploma has a great deal of value in India, its lack of formal status as a degree is problematic when graduates apply for jobs or ­further study abroad. In view of such issues, this move will be very much welcome.

Second, and far more radically, the government has taken what Human Resource Development (HRD) minister Prakash Javadekar calls a “historic decision” to give up much of the control it currently exercises over these ­institutions.  As per the current ­dispensation, the board of ­governors of an IIM has the power to recommend three names each for the posts of ­chairman and director. The board forms a screening committee and ­recommends the names to the ­government, which makes the final ­decision on who to ­appoint. In the changed scenario, ­however, the board will be able to decide on the ­appointments itself without ­reference to the government.

The government will also reduce its presence on these boards to almost half the current levels, and in some cases it will be represented by no more than one member from the Centre and one ­member from the relevant state.  These representatives will continue to have a say, but their recommendations will not be binding on the board. The ­remaining members will include ­various eminent persons, faculty ­members and alumni. The number of alumni representatives is set increase from the present level.

All this will contrast sharply with the situation at other institutions such as the Indian Institutes of Technology (IIT) and the All India Institute of Medical Sciences (AIIMS), where the government will continue to appoint ­directors.  Once the government takes a back seat from micromanaging the ­business schools, a system of CAG aud­its and ­reports to Parliament will be ­introduced in order to establish ­accountability and transparency.

This autonomy in governance is ­expected to go hand in hand with greater academic freedom. “The fear that my innovative idea may not get ­approved in the board, because it is ­government-controlled, will not ­remain,” said a board member.  However, IIM academicians admit that a fair amount of autonomy already ­exists on the ­academic side, especially in the first six IIMs – Bangalore, Indore, Ahmedabad, Calcutta, Kozhikode and Lucknow.  “Undoubtedly the first six IIMs enjoy fair amount of autonomy the way we ­operate and so far academics is ­concerned it’s cent per cent freedom,” says IIM Indore Director R. Krishnan.  Whether it be a question of the ­syllabus or one concerning the ­students’ fees, the IIMs are currently not really shackled in their decision making.

There is precedent for the institutes deciding to increase their fees ­significantly, and in fact they did so a few years ago.  At one point, the annual increase in the fee level at various IIMs ranged from a 5 per cent hike to 30 per cent.  At times, the government has even ­intervened. When Murli Manohar Joshi was the HRD minister during the Atal Behari Vajpayee ­government, he was opposed to ­steep students’ fees and wanted the IIMs to put across their points of view to a committee. But ­subsequent protests from the IIMs, along with the fall of the NDA ­government, led to the matter being put on the backburner.

Interestingly, in the mid-90s, senior academicians say that the government was in favour of IIMs increasing their fees. As a result, the fee for the two-year programme has gone up from Rs 500 to over Rs 19 lakh.  At well-established IIMs such as Indore, the Board of Governors is empowered to decide on the fees through a Memorandum of Association. Many feel that the government’s concern over fees in general is more nuanced and they normally ­expect institutions to be sensitive t­oward the students’ needs. However, as IIM graduates are virtually guaranteed to get a high-­paying job, the ­management is under less pressure than usual in this case.

IIM Bangalore Director G. Raghuram: “We have always had the ­autonomy on matters of syllabus and size of the course.”

IIM Bangalore Director G. Raghuram tells Outlook, “Ever since the ­government financial support stopped for the earlier IIMs including IIM Bangalore, we have had the freedom in setting our fees.” Not just that, “we have always had the autonomy on matters of ­syllabus and size of the course.”

Even when it comes to the issue of ­increasing the number of seats, “we have always had freedom on the ­number of seats, as long as we did not have to seek funds from the government. The only ­instance of a ‘required’ ­increase in seats was when the OBC ­reservation was made an essentiality,” ­according to Prof. Raghuram. 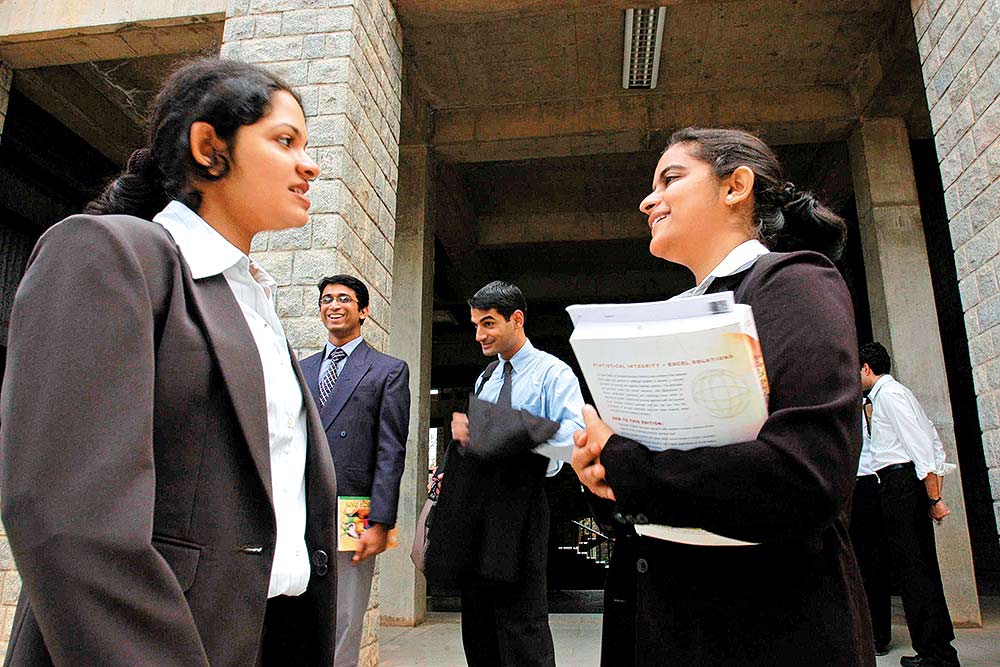 Putting the matter of seats and ­reservations to one side, one issue faced by the IIMs is the fact that it is difficult for them to ­attract foreign ­students.  Even though some of the ­institutes are willing to make as many as 10 per cent of their seats available to foreign applicants, they have not been able to make a breakthrough in this regard. The ­problem lies in the fact that foreign students with profiles ­similar to those of Indian IIM students are able to get admission at top ­foreign schools with which the IIMs cannot yet compete, and may even qualify for scholarships there. It is hoped that, with this increased ­autonomy, the IIMs will be able to ­raise their academic standards and encourage more foreign students to seek admission.

In order to raise standards, the IIMs will have to develop a stronger ­research and learning culture and work ­environment, bring in the best teachers from wherever they may be found and work on motivating their students.  Various efforts are already being made to reach out to ­foreign students and ­faculty. For ­example, GMAC, which ­conducts the GMAT test, is working with IIM Indore and eight other Indian business schools in order to attract more international applicants.

It is also hoped that there will not be any ban on IIMs opening new ­campuses elsewhere in the country as well as abroad. Currently, IIM Lucknow ­operates a secondary campus in Noida. IIM Bangalore, however, faced ­problems when they opened a chapter in Singapore in 2012. The ­institutes are hopeful that such ­restrictions will be lifted in future.

One essential task for the institutes is to gear themselves towards the ­market economy. As state-owned institutions, the IIMs are ­required to meet certain standards of transparency and to follow guidelines regarding reservations, but they are ­otherwise free to associate with the ­private sector.

According to Prof. Krishnan, “Even now the government doesn’t come in the way if we want to do something with the industry. There is nothing to stop us to have more interaction with the ­industry even now except that we have to be more open and transparent. Neither government nor IIMs on their own will favour one particular ­company or one industry group.”

“Industries would value the ­autonomy given to IIMs and would feel more comfortable in ­providing financial ­support.”

Prof. Raghuram agrees with this, going on to add, “I ­believe industries would value the ­autonomy given to IIMs and would feel more comfortable in ­providing ­financial support. The ­utilisation of this would be governed by board level decision making.”

Otherwise, most IIMs are self ­sufficient as far as financial resources are concerned, through fees and ­executive education. Prof. Krishnan ­underlines that the institutes earn enough to run themselves, and are not dependent on any industrial support.

With more freedom for self ­determination, there will be more ­competition amongst IIMs to excel. Strategies will be decided by the board of governors. “The competitive spirit would be more pervasive, leading to ­better ­performance,” says Prof Raghuram. “Correspondingly, I also ­believe that each IIM will take a ­distinctive ­positioning, with a regional and/or ­sectoral focus which will be a great value addition for local and ­national development. This ­complementarity would provide ­opportunities for ­collaboration too.”

When it comes to this sectoral focus, IIM Indore, which has a diverse, ­heterogeneous faculty, would like to focus on the Micro, Small and Medium Enterprises (MSME) sector. The ­institute is located in an area that is a hub for such enterprises, and the ­sector ­currently faces many challenges.

However, any change in these ­educational institutions will be a ­gradual process. Each institution will be able to ­determine a direction and ­continue with it in the long run, and the results will also manifest themselves in the long run.