Frankly Ranting: Neither News Nor Even An Hour

The loaded barbs, cloaked in the tricolour, on the Arnab Goswami show 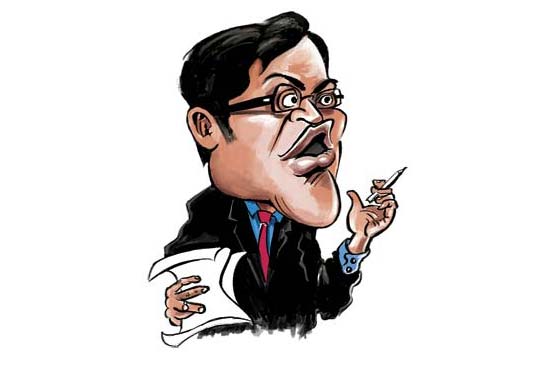 Illustration by Saahil
March 23, 2015 00:00 IST Frankly Ranting: Neither News Nor Even An Hour

Debate: Should the BJP pull out of its alliance with the PDP in Kashmir after the release of separatist Masarat Alam?

Times Now rationale*: Good cop BJP was speaking a different language from bad cop Mufti who was playing to a pre-scripted tune

Debate: Should the BBC have interviewed the Delhi gangrape convict for Leslee Udwin’s documentary India’s Daughter?

Arnab’s position: The government should ban the film from being telecast on rival channel NDTV

Quote: “Someone very powerful in the Congress for the interview. Why?”

Times Now rationale: Laws do not allow BBC to show an interview-based documentary with a rapist in England. Why here?

Arnab’s position: We have to deal with both Pakistan for getting its facts wrong and the Congress party which has embarrassed our country and our national interests

Quote: “What the Congress said has undermined India.”

Times Now rationale: Video proves Pakistan crew set the boat on fire. The boat was on a terror mission as the four-minute footage proves.

Debate: Why should Greenpeace activists go crying before the British Parliament?

Arnab’s position: This is not a free speech issue but a national issue

Quote: “Is this activism or anti-nationalism?”

Times Now rationale: The government would not have got the opportunity to defend its position against Greenpeace charges before British Parliament

Debate: What should India’s position be after Sri Lanka’s decision to hang five fishermen from Tamil Nadu caught in Lankan waters?

Quote: “Why is Swamy against the majority Tamil view?”

Times Now rationale: Swamy should have used his good offices with Mahinda Rajapaksa to secure the release of the fishermen

Debate: Should Ved Pratap Vaidik, an aide of yoga guru Baba Ramdev, have met terrorist Hafiz Sayeed while on a visit to Pakistan?

Arnab’s position: Lampoons Vaidik and thrashes the senior journalist without hearing him on prime time

Quote: “What is this rubbish you are talking? Do you have a transcript?”

Times Now rationale: What he has done is wrong. He had talks with the mastermind of the 26/11 attacks on India.