The Rajasthan verdict provides interesting insights into the question of leadership. 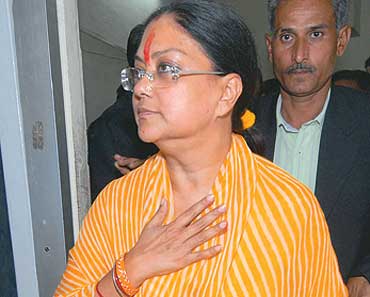 The Rajasthan verdict provides interesting insights into the question of leadership. The defeat of BJP’s Vasundhararaje had actually been on the cards, according to informed party sources. Raje tried to emulate the Narendra Modi formula of a larger-than-life leader. Her ‘Jai Jai Rajasthan’ campaign was a variation of ‘Jeetega Gujarat’.

But the problem was that while Modi had a clean image, there were serious allegations of corruption against Raje and her government. Which means that a personality cult works only if the leader is seen as clean and above board. The 22 police firings during her reign also perpetuated the image of a maharani whose troops fire at the public. Then the caste arithmetic went badly wrong. The clean Congress leader and low-key former chief minister Ashok Gehlot was the gainer, though he is not a cult figure and the Congress did not do anything extraordinary. Most people believe the BJP defeated itself.

Gehlot explained his victory: "The voters have voted the BJP out of power and have voted against poor governance. There was all-round corruption and law and order was a big problem." According to him, Rahul and Sonia Gandhi’s campaign in the state contributed in a big way to the Congress victory.

Still, this was a closely-fought election. The disarray and infighting in the BJP and RSS clearly went against Raje. Close to 60 rebel candidates were in the fray and she has told the BJP high command that she holds them responsible for sabotaging her prospects. A section of the RSS also worked against the CM. Indeed, there was a campaign from Raje’s detractors to stop her from even becoming the leader of the Opposition in the assembly after her defeat.

Among the two national leaders who worked against Raje from within the BJP were Bhairon Singh Shekhawat and Jaswant Singh. The lady is supposed to be livid with all the men in the party who ‘sabotaged’ her. She will, however, be leader of the Opposition, say BJP sources, and will continue to play a long political innings in the state. Many in the party hope that once out of power, Raje will let her royal status impinge less on her politics, and become more accessible to partymen as well as the people of Rajasthan.