The SP's rise to favour will slow down cases against Mulayam, speed up ones against Mayawati 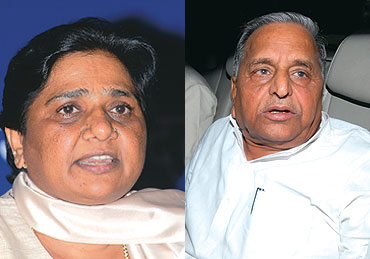 outlookindia.com
-0001-11-30T00:00:00+0553
With a desperate Congress seeking the support of the Samajwadi Party to keep the UPA government afloat, Mulayam & Son could well end up beneficiaries while UP chief minister Mayawati may find herself back in the dock in cases against her.

To begin with, a disproportionate assets case against Mulayam Singh Yadav and his son Akhilesh, currently pending with the CBI, could now find its way into cold storage. This is a preliminary enquiry that was registered by the bureau on March 5 last year against the SP chief and his son on the orders of the Supreme Court hearing a writ petition.

The petitioner, Vishwanath Chaturvedi, had argued that Mulayam and his family had declared an income of Rs 70,000 in 1977. From then till 2005, Chaturvedi tabulated the known sources of income of the father-son duo. They worked out to about Rs 3 crore. But ahead of the 2004 general elections, Mulayam and Akhilesh had declared an income of Rs 20 crore. Where did the additional money come from? That became the subject of Chaturvedi's petition filed in December 2005.

Chaturvedi also filed several affidavits asking how Mulayam and his family had acquired property running into hundreds of crores. The apex court passed an order on March 1 which, among other things, asked the CBI to inquire into these claims. The CBI, Chaturvedi told Outlook, "filed an affidavit in court stating that a prima facie case can be made against the father and son". The case was registered on May 9 this year but is yet to be listed.

Following the political realignments, the CBI will in all likelihood now go slow on the case. The March 1 ruling had also stated that "on receipt" of the CBI report, the "Centre may take further steps depending on the outcome of the preliminary enquiry". This has inbuilt leeway for the UPA government to speed up or delay the case. Chances are that the Centre will not be in any hurry to push the probe till the general elections in 2009.

For Mayawati, on the other hand, the changed political equations at the Centre could mean a renewed burst of activity in the cases against her. Investigating her in a disproportionate assets case, the CBI's initial findings could now be put to use. Last year, UP governor T.V. Rajeswar had in the Rs 175-crore Taj corridor case refused the CBI permission to prosecute Mayawati. The Supreme Court had upheld his decision ruling that it didn't have the jurisdiction to "interfere" in a governor's action. But the CBI can now approach the governor again if it presents fresh evidence in the case. And given the SP's rise to favour, Mulayam and Amar Singh are certain to press for quick action in this case—and the governor may have no choice but to grant permission.

By Saikat Datta and Sharat Pradhan

'We'll Vote Against The UPA Govt'