A cow-belt alliance to cover all bases 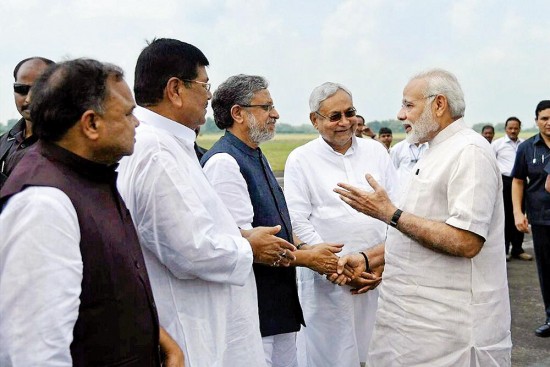 Last week’s triple embarrassment in the Rajasthan bypolls may have prompted the BJP brass to do some stocktaking, but for Nitish Kumar it holds no dark portent going forward to 2019. Far from it, the Bihar chief minister gives off an air of quiet confidence on the question of the NDA retaining power at the Centre. “There should be no misgivings about the victory of this alliance,” Nitish told reporters after the Lok Samvad programme in Patna on Monday. “It’s not proper to link the Congress’s success in Raja­sthan with the Lok Sabha elections.”

Yet, is there a hint of misgiving? None whatsoever as far as Bihar itself is concerned, where the JD(U) shares the optimism of its chief. “Our alliance is a tried-and-tested one,” Sanjay Jha, party general secretary, tells Outlook. “The JD(U)-BJP combination is simply unbeatable in Bihar.” Which is just as well, because Nitish had gambled big on the NDA winning 2019—even sacrificing the pivotal role envisaged for him in an alternative.

To protect his stake, Nitish now has to help the NDA bag as many of Bihar’s 40 Lok Sabha seats as it can get, to offset potential erosion elsewhere in the north. As a strong-alliance state, the dynamics in Bihar is a tad different for the BJP from the rest of the cow belt. Jha reels off past statistics to buttress his point. “Even in 2009, the NDA had swept Bihar, winning 32 seats. We followed that up by winning 206 out of 243 ass­embly seats the next year,” he says. That too when Ram Vilas...