A duplicitous Islamabad apart, Vajpayee has to negotiate the hardline here. But the mascot may have half won the peace Updates 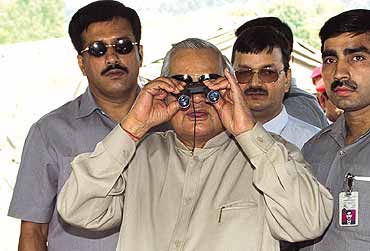 outlookindia.com
-0001-11-30T00:00:00+0553
Will the dove fly over the barbed wire? It's only the brave who would dream of peace between India and Pakistan. In the last year of his term, Prime Minister A.B. Vajpayee has displayed the courage to give peace in the subcontinent yet another chance. As he himself said, this is his last and final try.

It's a typical Vajpayee initiative. All the signs are there. The foreign office has been instructed to follow the PM's line. And the sceptics in the BJP and the government have been told to quell their murmurs. True, given the tortured history of the subcontinent, the prime minister may have stepped on a minefield. But if he succeeds, against heavy odds, in ushering in an era of peace, then Vajpayee's place in history would be assured.

That is why, once again, between hope and despair, the subcontinental tap dance has begun. Some of the early tentative moves by both the Indian and Pakistani foreign offices have been much too cliched: our cbms (confidence-building measures) are better than yours, say the Pakistanis. Your response is completely inadequate, the Indians retort. New Delhi has already turned down the Pakistani proposal to denuclearise South Asia and MEA officials say that Islamabad's reluctance to open trade ties is not really a "hopeful" sign.

The buzzwords in the MEA are "slow" and "calibrated". A summit-level meeting between the two prime ministers is not even on the horizon. Vajpayee has declared the strategic approach this time will be hard-headed; nothing will be done in a hurry—"Koi jaldbaazi nahin hai." Which is why the cynics are whispering that all that will come out of this "melodrama" will be the predictable appointment of high commissioners and the restoration of civil aviation links. That is, a lot of fluff with no tangible gains.

The slow and calibrated approach notwithstanding, there are far-reaching political implications in the latest peace moves. If the initiative gathers momentum—and another horrific massacre doesn't derail the whole process—then Vajpayee will lead the BJP in the 2004 general elections on a more moderate plank. Significantly, this peace process also has the potential to change the vocabulary and atmospherics of domestic politics in India.

Vajpayee's cautious approach is, to some extent, shaped by the lack of enthusiasm within the Sangh parivar. "My friends have put me in the dock for this move," an emotional Vajpayee told Parliament last week. So, it's not just Pakistani duplicity he has to look out for. The bigger and difficult challenge will be to manage the hardliners in his own party and the government.

Nourished on a high-pitched "death to Pakistan" ideology for decades, there are many parivar members who feel uncomfortable with any move that attempts to harmonise relations with our neighbour. This hardline section also believes that the mood in the country is "anti-Pakistan" and there are no popular points to be won by a peace process. "What if there is another incident like the Nadimarg massacre? Will the PM still want friendship with Pakistan?", they ask. Senior rss sources say if the process moves too quickly and Vajpayee accepts the invite to Pakistan, they will have no option but to openly oppose it.

The BJP is still trying to come to terms with the political outcome of the Indo-Pak dialogue. Partymen worry about the prime minister's political image if the initiative fails. Senior leaders grumble that the Vajpayee line will have to be "explained" to the cadre. Says a BJP MP: "This will create problems for us in an election year. We can't effectively raise Hindutva issues if we are running around hugging the Pakistanis!" Clearly, the prospect of cordial Indo-Pak relations is cause for anxiety within the party.

Until now, Vajpayee has handled criticism within the saffron family with a firm hand.He has made it clear he should be given enough elbow room to bid for peace with Pakistan "for the last time in my lifetime". He has reportedly asked close cabinet colleagues to help him rally the party behind him. That he will tolerate no open opposition became clear at the recent three day RSS-BJP conclave held in Delhi. No one dared to air their doubts before the prime minister. And Vajpayee did not even bother to explain his position. Senior rss and BJP strategists agree: "Vajpayee may have already won half the battle within the parivar."

There's another aspect to the peace move that is only now being understood by the BJP. Party insiders point out that despite doubts among the cadre, the Pakistan initiative has been good for Vajpayee's image. And what's good for him is ultimately good for the party. Besides, as his popularity has always outstretched that of the BJP's, the party will have no choice but to follow him.

Vajpayee obviously believes another bid for peace makes for good politics. Says an rss strategist: "The mofussil-level BJP leader can't see the larger picture. But Atalji has always had his finger on the pulse of the entire country. He believes there is a large constituency that wants genuine peace with Pakistan."

The Pakistan initiative, sources say, has not been taken by "Vajpayee, the pacifist" who has a genuine desire for peace. There's another Vajpayee, the consummate politician whose postural agility has kept him at the helm of both a fractious nda and a hardline and independent Sangh parivar. By cooling tempers on the Indo-Pak issue, Vajpayee is also trying to make the Modis and Togadias irrelevant even as he tries to squeeze the Congress by occupying the middle ground.

Many Hindutva ideologues accept that, post-Iraq, there are no real gains in warmongering. "We did nothing after the December 13 Parliament attack. We deployed our troops at the border but did nothing after that. We can't do that again and again to the nation," says Organiser editor Seshadri Chari. "India as the bigger nation can afford to take the first step," he says. "Our nationhood isn't defined by Pakistan alone."

Foreign policy experts believe the prime minister has successfully made a virtue out of necessity. US pressure to talk to Pakistan was mounting—especially after Yashwant Sinha's "pre-emptive strike" statements. Vajpayee acted before the US could be compelled to use strong words about Indian obduracy. Says former foreign secretary J.N. Dixit: "Yes, there was US pressure. But we're sensitive about admitting this, while the Pakistanis happily act like a client state and keep inviting the Americans to solve their problems."

Though India is very touchy about officially admitting to any pressure, New Delhi does want the Americans to lean on the Pakistanis to stop cross-border terrorism. Still, members of the Vajpayee establishment point out it's absurd for Indians to expect that US friendship with New Delhi will be at the cost of Pakistan. Says an MEA official: "There are thousands of US soldiers on Pakistani soil and we don't even give them landing rights! Pakistan is an old US ally. We have only recently become friends with the Americans. Vajpayee knows that India can expect no special favours from them."

President Pervez Musharraf's assurance to US deputy secretary of state Richard Armitage that any terrorist camp in Pakistan-occupied Kashmir would disappear tomorrow (he also added that there were no such camps!) is being seen as an optimistic sign by India. At the same time, Vajpayee is reportedly aware of intelligence reports that there has been no let-up in the number of militants waiting to cross over into Kashmir. "Bloodshed won't end in Kashmir. Let's just hope it comes down and a Nadimarg-type massacre doesn't take place," says a source.

This will also be the Mufti Mohammed Sayeed government's first summer in the Valley. The logical argument is unless India makes some concessions on Kashmir, why should the Pakistanis make the Mufti's life easy and, in effect, endorse the recent elections in J&K? Vajpayee is reportedly aware of the intelligence reports. He expects no sudden miracles in the Valley.

So are we at a dead end? Is it a return to the point from where we began? No, say Indo-Pak observers. Ending cross-border terrorism can—maximum—be the outcome of whatever final settlement the two sides come up with. It's unrealistic to expect this to be the starting point. Sources say Vajpayee knows he will be walking a tightrope this summer. Every terrorist strike in India will tie his hands further. One way to continue on the path of peace despite the violence, say experts, is for the Pakistanis to use strong language against every terrorist strike from all possible platforms. "If they want these talks to continue, then they will have to change their vocabulary and become sensitive to Vajpayee's position," says an analyst.

The former high commissioner to Pakistan, G. Parthasarthy, warns it will be a slow and laboured process. "I think Pakistan will pretend to bend to the US without actually doing so. They will keep the pot boiling in Kashmir." The army's role in Pakistan's public affairs also makes Indians sceptical about the process. "The Pakistani establishment has survived by perpetuating a conflict situation with India. Let's see if they will change. Still, talking is always a good thing," says Dixit.

Ironically, some in the Indian camp are complaining that the Pakistanis talk too much. In contrast to Vajpayee enunciating his policy with carefully chosen words, the floodgates have opened in Pakistan. Foreign minister Khurshid Mehmood Kasuri has given over a dozen telephone interviews to Indian journalists and television channels and several New Delhi scribes are in constant touch with foreign secretary Riaz Khokhar. This old Pakistani tendency to set up independent channels with the Indian media and civil society is a cause for worry for policymakers in Delhi. Says an MEA official: "The Pakistanis certainly manage to get their point across, but in the process they also ruffle feathers in the government."

However, a few hurt egos in the Indian foreign office can't become a major obstacle. The big picture is a unipolar world, two nuclear neighbours who have fought four wars and the prime minister of the world's largest democracy making a final bid for peace. This is a complex and heady mix of history, religion, politics and personalities, in a subcontinent with an intense and rich heritage. The perennial problem with Indo-Pak relations is that the sudden sound of gunfire and the blood of innocents on the streets can reduce the noblest of intentions to zero. But that is the challenge: will the dove fly over the barbed wire?

Tears Of The Sun