For Work Is Worship 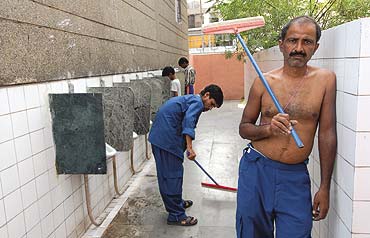 outlookindia.com
-0001-11-30T00:00:00+0553
Not all Brahmins are successful technocrats or bureaucrats. Across the country the poor among the upper-most Hindu caste have to eke out a miserable existence like the rest of humanity’s economically deprived. In Delhi, Outlook caught up with sanitation workers employed by Sulabh, an NGO which runs public toilets.

Forty of Sulabh’s toilet cleaners are Brahmins, most of them from Bihar. Says Kashinath Jha, a maintenance engineer at Sulabh: "This is largely because of the abject poverty in Bihar." The Brahmin sanitation staff are from what is believed to be a large Brahmin migrant labour population in Delhi consisting of rickshaw-pullers, coolies and vegetable vendors.

Kamlesh Chaudhary, one of the Brahmin sanitation workers at Sulabh’s toilet complex inside Azadpur vegetable market in Delhi, says: "Our income from farming is meagre as the region where we come from is prone to floods and drought. Most people like us leave in search of jobs and come to the cities." Jha left home in Samastipur and joined Sulabh six years ago after he heard of it from one of his relatives, another Brahmin, who also works for the NGO. Kamlesh and others like him earn Rs 2,500 per month. Since they are provided food and lodging, they save enough money to send back home. This, they say, is more than what they can earn working as casual labourers.

Ramesh Jha, a Brahmin from Darbhanga in Bihar, is also an employee at Sulabh. He came to Delhi seven years ago but had to struggle. "I worked at a factory in Wazirpur for two months. I was paid Rs 1,200 a month and I found it very difficult to survive." Ramesh then switched to Sulabh after a chance meeting with one of its employees and is currently employed at the second toilet complex inside the Azadpur mandi. Doesn’t the nature of his work upset him? "I have never had second thoughts about working at Sulabh. Why should I? I am not stealing or committing any crime. I have to earn my living and I am doing that here with my hard work," he says.

Cut to Pramod Kumar, 30, from small-town Bahraich in Uttar Pradesh. He is a graduate but has been pulling a rickshaw in Delhi for the last two years. He has kept this a secret from his folks back home. "I don’t quite know what to do with my caste. It is not going to fetch me a government job. I am the only one in my family who pulls a rickshaw for a living. My family thinks I am doing a sarkari job in Delhi and as long as I keep sending the money they remain blissfully unaware," he says.

Not just in Delhi. In Benares, Mumbai, Chennai and Jammu the plight of the poor Brahmin is the same. Poverty obviously knows no caste.

Once More For The Twice-Born