For Whom The Bell Tolls

Sectarian ambitions and the AK-47 create an era of insecurity 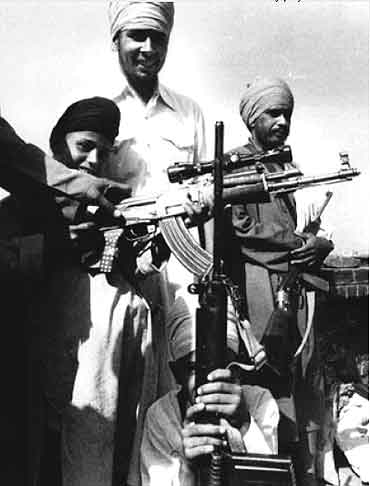 "Among the abuses of authority, the one single item which affected the people most was the manner in which the powers to detain, assumed by the government under the amended MISA, were misused at various levels.... Deprivation of liberty without a trial and without affording opportunity to the person detained or even his knowing what infraction he had been responsible for..."—Shah Commission Report

QUOTATIONS can often be of dubious utility. But what better place to look for a tone-setter for this period—one of the most crucial after Independence, one that saw India assume a face dangerously antithetical to its gooey self-image—than the Shah Commission, set up after the fall of Indira Gandhi's Emergency regime to report on its excesses? There are many aspects of the Emergency, but its central feature is captured here. In the way it showed how India's liberal-democratic dream could go horribly wrong, how its self-sustaining mythology contained the seeds of its own subversion.

The Emergency, for the first time, gave scope for a crass display of contempt for legal, human values. Such behaviour has had a permanent impact. Later governments have always had at the back of their minds the excesses of those days. A very dangerous concept began to take shape in politics—"if Indira could get away with it, why not me?". In a way, the contempt for human rights in Punjab, Kashmir and the Northeast till today derives from, was made possible by Indira. That's one permanent consequence of Emergency.

Politically, the period—which saw the last of Congress-style colossuses—offers other sobering lessons. The response to Indira's imperious taunt was cacophony: a dishevelled crew of democratic and reactionary forces overthrew her, but with no abiding, adhesive agenda. The Janata's victory, easy to idealise then, soon frayed at the edges. Inder Malhotra writes in Biography of Indira Gandhi: "The Janata not only destroyed itself with astonishing rapidity but also it did something far removed from its original intention. It helped and hastened Indira's return to power." Morarji Desai vs Charan Singh. The pattern of unrequited or rebuffed ambition ruling by default, set then, was to become sickeningly familiar: V.P. Singh vs Devi Lal, Gujral vs Gowda. Yes, even Rao vs Arjun Singh—for, deprived of larger-than-life semi-divine rulers, the Congress was hardly immune to this infection. There was another key component to this alternative politics. The Hindu nationalist factor, in the shape of Jan Sangh, became apparent and was to hijack the dominant discourse in later years.

There's a deeper commonality between 1977 and 1997. Two aspirants to power, Morarji and Charan, destroyed each other. I, a senior income tax official then, was unwitting witness to a surreptitious part of the struggle. Morarji sacked Charan and he hit back through Raj Narain, the Laloo of those days. Charan returned as finance minister. In this capacity, he swooped on Desai's son Kantibhai for misusing his father's position. Desai reacted by saying there were charges against Charan Singh and his wife.

The I-T commissioner, Bombay, said to be pro-Morarji, hastily got out of harness after Indira wrested power in '80. An inquiry commenced against Morarji's family. I was recalled for it from Calcutta—where I'd been shunted for being "Indira's man", though I'd never met or spoken to the good lady. The Official Secrets Act prevents me from giving details. It's sufficient to say Indira got a lasting hold on Morarji. I mention this aside to show political benefit from government was derived by all. Another disturbing presage.

As Indira strode about cheerily mothering the television boom amid pageants like the Delhi Asiad and the Festivals of India abroad, her self-made nemesis was growing in the magnetic form of Bhindranwale. A historic grudge against the Dilli durbar, heightened since the truncation of the Greater Punjab, and dovetailed with a curious mixture of prosperity and unemployment, set the stage for the killing fields of Punjab. Indira's "last battle" at Amritsar alienated the Sikhs. Cataclysms followed: the assassination, the riots. A startling motley of Congressis, Sanghis and outright lumpen shattered Delhi's humdrum surface with a numbing carnage. Rajiv came to power with the wretched words: "When a big tree falls, the earth trembles". The AK-47 had long made its appearance on the Indian scenery and office-goers in northern towns were greeted on their morning bus with the daily reminder: "Look under your seat, there could be a bomb".

In social terms, a landmark event was the Shah Bano case. Justice Chandrachud gave a conscientious verdict, but in its crusading nature Muslims saw a threat to their fragile self-identity. I read the affidavits recorded in many subsequent suits; they could as well have been drafted by the RSS. On enquiry, I found that, in fact, some of them were. The Muslims' siege mentality helped procure the Muslim Personal Law amendment legislation. Reforms would have to wait.

Culturally, the decade saw great changes in form and content of the cinema and the rise of colour TV. This was the decade of Ray's Shatranj ke Khilari, of Sadgati; of the New Cinema tribe, the Mehtas, Mirzas, Shahs; of middle cinema "auteurs", Benegal, Nihalani. Prakash Mehra and Manmohan Desai built up the Amitabh persona in films like Muqaddar Ka Sikandar, Amar Akbar Anthony et al. Amitabh was actually a bogus "angry young man"; the Great Pretender—clown, upstart, pseudo-radical who claimed to purge the ills of the day killing bandits or machine-gunning a whole cabinet.

The Bofors cannon backfired but Rajiv and his techno-kids had brought in the end-aeon exhilaration. TV did little to unmask the Grand Illusion. In Hum Log and similar comforting domestic dramas, everything was fine in the best of all possible worlds. As cardboard epic Ramayan turned into a national fascination, the Saffron mood was setting in...