For Those Positive Vibes

Akankshya, a care home for the HIV/AIDS infected, is helping positive people rebuild their lives 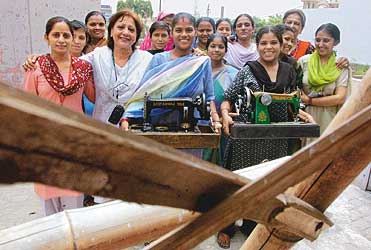 outlookindia.com
-0001-11-30T00:00:00+0553
It’s a modest building that blends into the lower middle class ambience of Shahdara, Delhi. Despite the hustle and bustle of life all around, it is quiet and peaceful at CHELSEA’s care and support home, Akankshya in Jyoti Nagar. It is difficult to believe that it is the lifeline for those infected by hiv/aids—widows who are rebuilding their lives and kids who have been orphaned because one or both parents have succumbed to the infection.

The home was started in 2001 by the Women’s Action Group—CHELSEA. It is a group of retired army and air force officers’ wives who wanted to give back to society the good life they had enjoyed. Doe Nair and Neelam Dang, two of the original group of 13 women who formed the action group in the ’90s, have brought the army discipline into their working. The home is clean, efficiently run and the Shahdara residents have accepted its inmates. In fact, many want to work as volunteers here but they don’t have the skills CHELSEA is looking for. There is also a team of dedicated doctors and social workers. Many caregivers and outreach staff are positive people who, because of their experience and ability to speak from the heart, have been able to attract many infected people to the home. At work they are like any other member of the staff, says Neelam.

Officially, only 10 people can be accommodated at Akankshya, but space is found for eight more. All the inmates are recovering from various ailments and have travelled from far-off villages or cities of UP, Gujarat, West Bengal and even Tamil Nadu. Forty-five per cent of Shahdara’s population are migrants, says Doe Nair. The medical facilities attract them to Delhi and they stay on for care and work that seems more readily available in the capital.

With about half a dozen local, national and international bodies funding their care, counselling and support services, CHELSEA works not only in Shahdara but holds prevention programmes in neighbouring areas like Sunder Nagari, Nand Nagar, Tahirpur, Harsh Vihar and the slums adjacent to Jyoti Nagar. They support positive people as well as those suffering from sexually transmitted diseases. Since early detection is vital to cope with hiv infection, health melas with facilities for free medical checks are held routinely. With bands, puppet and magic shows they attract big crowds. A range of messages on health, sanitation and even hiv/aids are disseminated through popular modes of entertainment. At least five of those who have attended a health mela volunteer for the hiv/aids test and are taken to the nearby Guru Tegh Bahadur Hospital daily. About 16 people test positive every month.

Community-based care and support of kids infected and affected by aids was started in 2002. When 14-month-old Ashu (name changed), an orphan who had lost both parents to aids, fell ill it was a day and night vigil of prayer and care here. Today Neelam, Manju and others are his foster parents. Oblivious of the trauma he has been through, he gurgles and stretches his tiny, emaciated fingers to Manju. CHELSEA is looking after 300 such children.

CHELSEA’s biggest challenge is finding employment for positive people. The team is constantly in talks with factory owners and others to find jobs for positive people. With the support of the ilo, income-generating activities have been started for the needy—many of them positive widows who have never stepped out of their homes. They are learning tailoring and have received orders for fabrication work for uniforms and dresses. A businessman has placed bulk orders with CHELSEA and daily the women complete their household chores to rush to Akankshya to work on the order. Their kids are looked after in the creche on the ground floor. At the end of the month, each of them could take home Rs 1,000.

Tongue In A Twist