Home  »  Magazine  »  Business  » Cooperative banks »  For Suits In The Country

For Suits In The Country 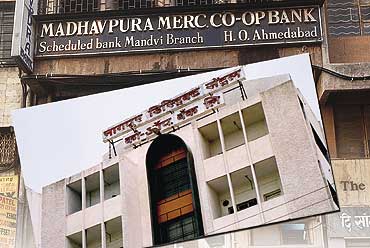 outlookindia.com
-0001-11-30T00:00:00+0553
The Home Trade failure has swung back the spotlight on cooperative banks and their frequent plays with government securities. Depositors, with their confidence in these trusted names in tatters, are increasingly questioning if this was just a simple case of fraud in an individual bank, or whether there are major loopholes in the cooperative banking and debt market system that prompt such scams?

The answer is obvious to many. Even the government which announced last year that trading in government securities would be dematerialised, like stocks. The actual launch of gilt trading on the NSE has been delayed but according to finance ministry sources, it is now expected in a couple of months. Is there any reason why the country has still stuck to the non-computerised, primitive gilt trading system, even almost a decade after the Harshad Mehta scam? None at all, except administrative failure. Financial experts feel that the RBI's failure to handle systemic problems cannot be condoned. In the stock market, for instance, the faceless trading system ensures that both the buyer and seller remain unknown—although NSDL has the records down to the last investor. The same sharing system ensures that you get the best prices, and actual delivery takes place at the least possible time with a very small downside risk. By contrast, even the exclusive SGL club of gilt trading, while eliminating risk (the RBI is an sovereign entity), is extremely sloppy, with dealers often losing interest earnings, their deals bouncing or going unrecorded.

What's worse is that in gilts, the RBI has, for some curious reason, still allowed the physical delivery system, which is easily manipulated. Home Trade's broker, Kethan Sheth of Gilt Edge, was an expert in this. He quoted lower prices, bribed officials and dispensed with physical deliveries of the securities for as long as he could. In the case of Home Trade, which touched about 20 coop banks, these had funded HT's gilt purchases of Rs 270 crore and were awaiting physical delivery, many of them blissfully ignorant of the actual system.

But what about the regulation of the banks themselves? Kirit Somaiya, MP and chief of the Investors Grievance Forum, says there's a systemic lacuna. Coop banks have a dual regulatory structure—the RBI and the Registrar of Cooperative Societies (RCS). While the RBI looks into their operations, it sends those reports to the cooperatives department of the state government. "This department is ill-equipped to handle banking issues, besides being vulnerable," says he. Not that the RBI is unaware. The latest Monetary and Credit Policy says that "the events of the past two years have made it clear that the present system of dual/triple regulatory and supervisory control isn't conducive to effective functioning".

Bankers agree that the RCS has the powers of the Holy Trinity. It can register, nurture and even wipe out a coop bank, compounding the politicising of the business. Since it takes just Rs 1 lakh and a handful of people, mainly small earners, to start a bank, the local neta often manages to use the bank kitty as his own. And political influence cuts both ways—by interrupting good business practice and unnecessarily highlighting small irregularities. After all, says a proponent of the cooperative movement, even scheduled commercial banks are not free of such scams. He cites the instance of the Rs 1,000 crore Indian Bank scam involving the chairman.

Critics feel that the RBI is shirking its responsibility of regulating the banks. But Rajiv Agarwal, secretary, cooperative and marketing, Maharashtra, hotly denies the charge. He says it is impossible for the RBI to inspect thousands of coop banks every year—there are over 600 urban coop banks in Maharashtra alone and about 2,500 in India.The urban cooperative banks are inspected by the RBI once every one, two or three years based on their performance. The National Bank for Agriculture and Rural Development (NABARD) inspects the rest through an ongoing sampling exercise, while the RCS audits them annually. It had been suggested that the RBI let out the auditing to professional agencies while it watches over. Agarwal says that the current scam is a result of the ill-intention of a bunch of unscrupulous people, and not a systemic failure.

But the poor countrywide loan recovery performance lends strength to the charges. On March 31, 2001, recovery of loans was as follows: Primary Coop Agriculture and Rural Development Banks (CARDBS) (58 per cent), State CARDBS (62 per cent), District Central Coop Banks (69 per cent) and State Coop Banks (83 per cent). The board members are financially naive, and rules much less stringent than an average bank. Both Somaiya and bankers agree that cooperative banks lose out on the quality of professionals, and professionalism.

It's not as if coop banks have no pluses at all; there are even good banks (see chart) which provide shining examples of service. The movement, a direct offshoot of Gandhian economics and the freedom struggle, is traditionally strong and helpful in rural India, especially western Maharashtra and Gujarat. In rural areas, these banks dispense 42 per cent of credit, the rest coming from nationalised banks. And compared to the Rs 80,000 crore of NPAs lying with commercial banks, the rural coop banks require only Rs 8,500 crore of re-capitalisation.

These banks are formed by coop societies that can take up any line of legitimate business. Since it's owned by the borrowers, the societies pay higher interest than any commercial bank, and profits are ploughed back for the members' benefit. In other banks, profits go to the owners. "But the government didn't help when it nationalised the private banks in 1969 and created a government system against a people's system," explains a banker.

There are two options before the government to make coop banks professional and plug scams. One, by reducing scope for political interference in the three-tiered structure. The Brahm Prakash Committee under the Planning Commission had propounded a Model Cooperative Society Act, under which the upper tier of banks would look after the lower tier. The more logical solution, says a senior finance ministry official, is to bring them directly under the RBI. "A bank is a bank, either private or government or cooperative. If there are no different rules governing, say, the sales of Amul and Kwality Walls ice-cream in the market, why should there be separate rules for coop banks and commercial banks competing in the same credit market? Coop banks should also maintain SLRS and CRRS to ensure efficient functioning," he says.

Not that the system is in an irreversible state of rot. All banks have paid their insurance cover up to June 2002. Account holders are therefore insured for deposits upto

Rs 1 lakh. The state government has proposed a Rs 150-crore revival package for the much-affected Nagpur DCCB while action is being taken against most offenders in the banks and the registrar's office.