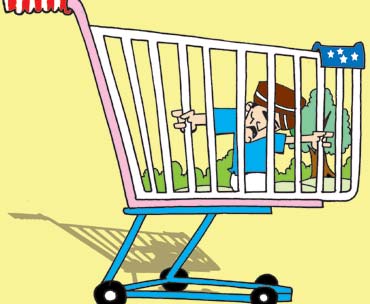 outlookindia.com
-0001-11-30T00:00:00+0553
The government has so far been zealous in its commitment to opening up the retail sector. And that too, much before the wto tells us to do so. Big corporate houses and mncs have been invited to invest in retail purportedly with the intention of attracting foreign direct investment (FDI) but mainly to benefit some mighty economic entities. And all this is being done without a care for the livelihood of 750 million farmers and over 40 million small retailers. The negotiations on the General Agreement on Trade and Services (GATS) are still on so there is no call for any country to open up its retail sector just yet. But, taking a cue from a suggestion made in the Economic Survey 2004-05, policymakers are busy drafting a proposal to open up the retail sector for FDI. This, when even the mandated agenda of the government, the National Common Minimum Programme, does not call for its opening up.

On a global scale, a few retail chains dominate the retail business, the major ones being Wal-Mart, Home Depot and Kroger of the US, Carrefour of France and Royal Ahold of the Netherlands. Naturally, India is the next big market and these chains have been asserting to their governments that they demand in gats that this sector be opened up. This is a matter of great concern, for there's the possibility of local, small retail shops closing shop and creating unemployment. Many unemployed youth now survive by opening small retail businesses and they cannot compete with global retail majors who come backed with huge investments. Of course, there are reports saying the supermarket majors can replace this loss of self-employment with additional employment generation. But it's a distant possibility.

Policymakers and neo-liberal economists argue that farmers would get a better price for their produce with the entry of big retail chains and the elimination of middlemen. But global experience has shown us that big retail chains have in the end formed cartels, curbed competition, caused misery to farmers and dictated high prices to consumers. The neo-liberals should know that competition is fair play in an economy and not the play of a few mighty entities. The British Retail Planning Forum (embarrassingly, financed by the supermarkets themselves) discovered in 1998 that every time a large supermarket opens, on an average 276 jobs are lost. The UK Competition Commission report of 2001 has also expressed concern over the loss of jobs. The New Economic Foundation found that £10 spent on a local organic box scheme in Cornwall generates £25 for the local economy within a radius of 24 km, compared to £14 if spent in a supermarket.

We recently experienced the consequences of following a neo-liberal policy in opening up agricultural marketing to the corporate sector. Corporate houses grabbed wheat and other produce from farmers by paying them a little more than the minimum support price (which is deliberately kept low by the government), stockpiled it and jacked up market prices, forcing the consumer to pay through the nose.

The unilateral opening up of the retail sector may also lead to other severe consequences. The farm sector is likely to be affected by cheap imports of highly-subsidised agro products. Global chains, once they set up operations in the country, will find it easier to source cheap products from the world market and sell it in this country. This will make the local farmers' produce uncompetitive. Most developing countries including India have phased out quantitative restrictions (QRs) on imports. The only way to protect farmers now from cheap, subsidised imports is the tariff mechanism. Off and on demands are being made by the developed world that the developing countries should also effect a corresponding reduction in the already low bound tariffs. The issue of evolving a mechanism to protect some of our sensitive products is still under discussion.

Another possible consequence is the dumping of cheap sub-standard products. There is no effective quarantine and sanitary and phytosanitary mechanism in place in this country. We don't even have a mechanism to test traces of genetically modified organisms (GMOs) in food. India hasn't yet approved any GM food crop. But now even unapproved GM foods could enter the country without adequate checks.

No Giant, No Midget