A wisp of a plot that betrays no trace of originality 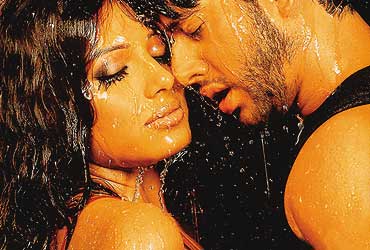 The good things first. Footpath has a fairly decent set of performances: a likeable Aftab, a diabolical Rahul and a self-assured and competent debutante Emraan. But all these budding fine actors are constrained by one seminal problem: a wisp of a plot that betrays no trace of originality. This time the Bhatts fall back on their own previous ventures for inspiration than poaching on Hollywood flicks. A case of hurried, lazy filmmaking that results in a stillborn motion picture. The central strand of Footpath, about three friends on either side of the law, is lifted from Mahesh Bhatt's Akshay Kumar-Nagarjuna-Paresh Rawal starrer Angaarey, the sibling feelings between Rahul and Emraan are reminiscent of the Aamir Khan-Rajat Kapoor emotions in Vikram Bhatt's Ghulam, life on the mean streets suggests a Sadak and the various cops on the screen appear to be leftovers of Gunaah. And Emraan's role reminds one of Vivek Oberoi's scorching debut in Company.

Confused? Here's Footpath in a nutshell: Arjun (Aftab) and tapori brothers Shekhar (Rahul) and Raghu (Emraan) are childhood buddies. As a kid, Raghu kills to avenge the murder of Arjun's dad following which Arjun disappears, only to be traced years later by the police. The cops force Arjun to become their stooge to home in on some drug peddlers who happen to be none other than Shekhar and Raghu themselves. Why has the police been after Arjun for so long for a crime he didn't commit? Why does he agree to help them out so easily? A potentially dramatic friendship-and-betrayal theme is never able to kick ass in Footpath. The noirish and dank atmospherics, the rough and tough language, the blood and gore, the unbridled violence might be an attempt to simulate some gritty realism, but it comes across as a patently faked attempt. More so when the supposed realism is liberally mixed with totally avoidable songs, filmy rains and forced romantic liaisons. Very neatly, there's one woman for each of the macho men. And heroine No. 1 happens to be none other than supercat Bipasha, the "epitome" of the bold, new, contemporary, urban Indian woman. Well, if heaving bosoms, flaring nostrils, pouty lips and shrill talk is all there is to modernity, it's time for Ms Basu to strike a new pose.

People Ask What We Are Going To Sell Next'