Labour is bought cheap, treated cheap—in India’s garment factories as at Bangladeshi ones 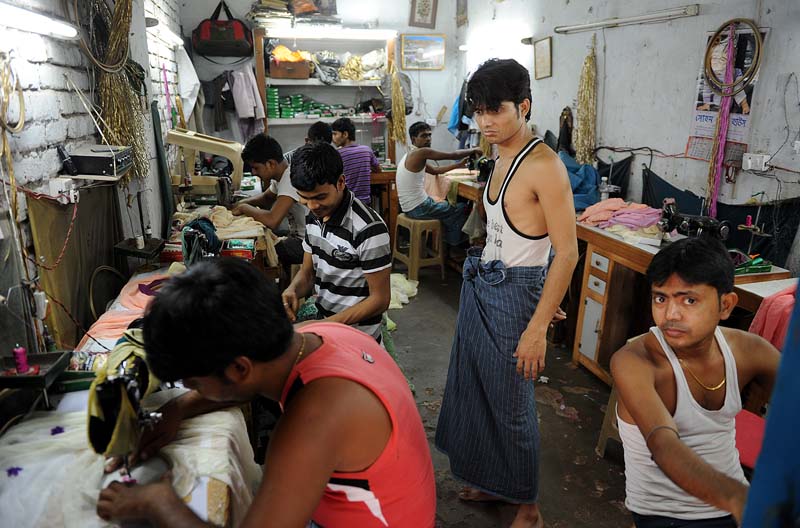 Even as the world remains morbidly fixated on the  tragedy in Rana Plaza on the outskirts of Dhaka—the collapse of the textiles sweatshop three weeks ago  buried 1,127 workers and sparked off a global outrage—it is business as usual at India’s textile hubs. And you don’t have to travel far from the city centre to find that out. All you have to do is visit an urban village in the heart of Delhi.

Mohammed Saddam Hussain and his co-worker Sanjay show up as usual in their one-room, windowless dyeing unit in Delhi’s Shahpur Jat. Their routine: dip yards of cloth into bubbling vats of chemical dye, morning to evening. Wait, there’s a snag. The LPG cylinder that fuels their water-heater has sprung a leak and the cramped room is filling up with flammable gas. Manoj, their employer, plugs the leak somehow and they resume work, immediately lighting the stove, unmindful of any risks.

Many such units, often catering to agents who supply to international ord­ers, litter the crowded streets of Shahpur Jat. Here, incomes of garment unit owners have ballooned in recent years, thanks to high-paying sub-contracts. Their prosperity is apparent from the glitzy storefronts. “I came to work in Delhi 13 years ago, and was a worker then—it’s just fate that made me successful,” says Manoj, who owns many of the tailoring units in Shahpur Jat, which he runs under the brand name Rimjhim.

But the workers—the ones embroidering, finishing or stitching the merchandise—have remained underpaid, overworked and in the same cramped conditions. For western observers, the most prominent and visible symbol of an Indian “sweatshop” is child labour. Hussain says he’s 20, Sanjay says he’s 15, both past the 14-year age limit past which children can work, though not in hazardous industries. Both refuse to talk about their wages.

“The textile sector in India is one of the worst offenders in terms of working conditions,” says C.K. Sajinarayan, national president, Bharatiya Mazdoor Sangh, one of the country’s largest trade unions. “The smaller units have an especially serious problem. There, exploitation is rampant.” Bad working conditions inc­lude wages so low they can’t meet basic needs, long hours, forced unpaid work, punishment for not meeting targets, and lack of emergency exits, ventilation or lighting.

Although laws are aimed at striking a balance between labour and business, workers always end up at the bad end.

“The term ‘sweatshop’ is slang, mostly used in the context of international trade between developed and developing countries,” explains Dr Helen Sekar, coordinator of the National Resource Centre on Child Labour with the V.V. Giri National Labour Institute. “What we have to look at is whether the laws are being followed or not—for instance, whether child labour is illegally emp­loyed in a unit, or if safety requirements are not being met,”  she says. In India and Bangladesh, as they battle neck-and-neck for expensive contracts to supply western retailers, working conditions are getting worse. As textile units in both countries vie to drive costs lower and lower, often companies find cruel or unusual ways to stay competitive. “In Tamil Nadu, some textile units make children work without pay until they reach marriageable age. Then the employer pays a ‘dowry’, a pittance, instead of wages, and hires a fresh batch of children,” Sajinarayan says.

The government, usually silent on children employed in textile units, is working on the draft of a new, stronger legislation against child labour. This law, it hopes, will encourage children to go to school instead of work. The draft in December 2012 proposed a ban on hiring children up to 14 years old in any industry, except where they help their family after school. For a new category of “adolescent” workers, the bill proposes a list of hazardous industries where the ban will be absolute. If these changes come through, Mohan, of Shahpur Jat, Delhi, will have to fire Sanjay, or face six months in jail and/or a penalty of Rs 50,000.

During the slowdown, more than 5 lakh Indian textile workers lost their jobs in just the last six months of 2007. The average wage of a textile worker in north India was $50-60 at the time. The same year, workers in Bangladesh rioted over low payments, which were $45 on average. Wages have since been revised in India, but the industry remains in the throes of intermittent mass sackings. Earlier, workers could switch jobs to escape bad work environments, but that opt­ion is now limited. Even training, which in any other business opens up options and raises income, doesn’t alw­ays have the expected outcomes in the textile business. “Workers only ask us one thing when we tell them to train with us—‘Am I going to be upgraded after the training?’ All we can say is no, but you’ll learn something new even if your income doesn’t increase,” says B. Basu, who heads Sasmira, a training centre in Bhiwandi at which the government trains textile workers.

It isn’t just compliance, though, which leads to bad working conditions. Regulation in India is also notoriously complex, with the government stepping in only now, and cautiously, to smoothen norms. “We are working with the government towards simplification and codification of laws related to textiles. There are over 100 regulations at present, of which 40 have been identified as the minimum statutory requirements,”  says Sajinarayan. Tex­tile units need to maintain 40 different records of returns and registers, which, the unions and government agree, must be narrowed to one or two.

The flip side, unions say, is that “simplification” should not be taken for hire-and-fire, which only makes the situation worse for workers. Dr Sekar points out that labour and industrial laws impose strict conditions with good reason—“in India the law is imp­lemented, that’s why you don’t see large-scale tragic incidents like in Bangladesh,” she says. There are also social and legal compliances, unlike in Bangladesh where textiles owners often flout safety regulations.

But there’s obviously no need to get com­placent. Smaller incidents, even fac­tory fires and collapses, often go unn­o­ticed, says Pratibha, vice-president of the Garment and Textile Workers Union. Worse, the Eur­ozone crisis has hampered Indian textile’s prospects. If things slow down fur­ther, those working in India’s garment sweatshops will sadly bear the brunt.