Late nights with the Rajni army 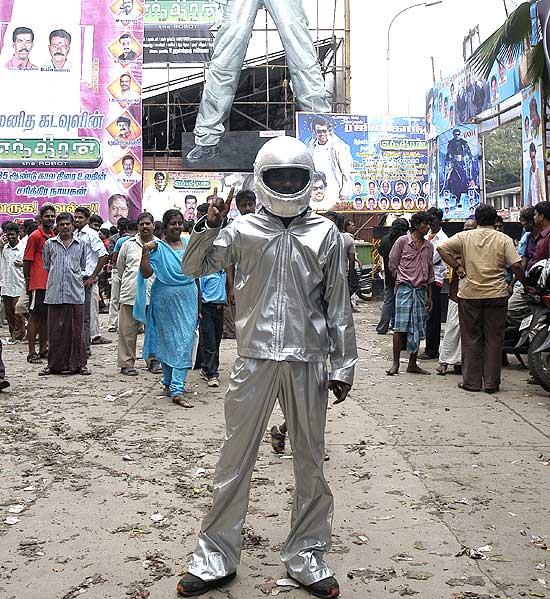 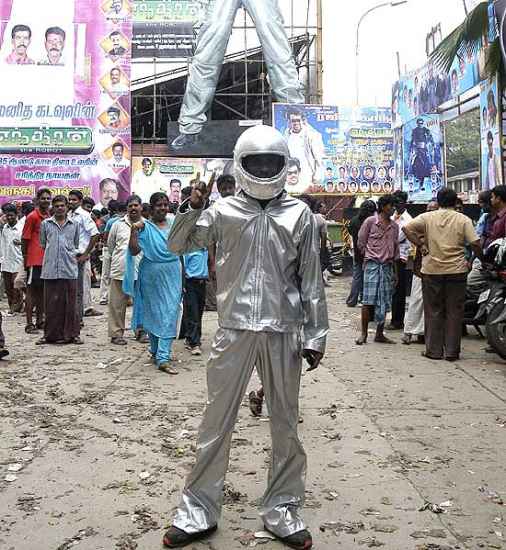 Enthiran. Day one. Late night show. An impossible to attain ticket procured after hopping through a warren of dens. Fan clubs have bulk-blocked theatres for almost the next two weeks. Inside the packed auditorium full of die-hard fans in auto-erotic animation, Rajni signals his arrival through digital fracture.

Ra-ja-ni. His name punches the screen alphabet by alphabet. Phatak-phatak-phatak. The alphabets form digitally in the morphology of monolithic architecture. Then the full name repeats in a final smashing crescendo. The acolytes are on their feet, arms extended towards the Holy Name. A collective baying engulfs the hall, drowning the high-decibel ambitions of the Dolby system. By now, the Rajni raanuvam (army) is jumping in the aisles in the most vivid display of premature ejaculation ever in public. The sighting of the messiah is imminent and the flock is in a state of self-hypnotised hysteria. Rajni reigns.

The pile-on techno fads are psychologically traumatic. You sense the fans’ emasculatory helplessness in the hall.

However, the audience reaction at the beginning and the end of this Rajnikanth blockbuster is a study in contrast. The audience enters the hall on the crest of a hype that has been sustained over months. At last, on this auspicious Friday, the serious Rajni fan has been active since 3 a.m., decorating the entrances to theatres with flags, festoons and cutouts, performing honey and milk abhishekams on their idol and dancing in the streets. So, when the fans eventually enter the hall on high adrenalin, it makes no difference to them what the film is. Their ecstasy derives from the fact that the deity who was remote and distant in his garbha griha is now manifest as an utsav murti, come out in their midst in a new avatar. It’s celebration time.

All the euphoria explodes in the opening reel, to be followed by inevitable ennui and the ‘downer’ affliction. While the screening begins to an infernal din of whistles, cat-calls, ululations and primal shrieks, it ends in eerie silence. Fans shuffle out of the auditoria, littered with plastic and paper garbage, themselves turned into cultural refuse—silent, muted, slouched. For over two-and-half hours they have been assaulted, attacked, pulverised by an ‘artificial-intelligence’ movie that seems to constantly resist the temptation to slip into becoming really intelligent.

The film is a simple gig in two parts. In one part we have a futurist scientist, played by Rajnikanth, who ends up creating a humanoid, an arti-fact, a metallic sarcophagus, and proceeds to invest it with his own physical identity. Here, however, we have a product of advanced cybernetics that still does not escape the master-slave binary. This lookalike ‘non-human’ can perform superhuman feats of strength, endurance and memory. Strangely, however, it does not boast a machine’s gender-free quality and seems to have an inbuilt phallocentrism. Not yet infected with the ‘flower of evil’, it remains attractive and yet ‘safe’ to the opposite gender. It paves the way for the peculiar irony of the scientist’s girlfriend Sana feeling ‘safer’ in the company of the robot (more Rajnikanth).

But, though this advanced cyborg lacks a primate’s digestive or copulative organ, it begins to acquire ‘feeling’. We realise that the mirror-image sameness only pretends to a difference. The human and the android are equally macho and very soon, like the human, the android too begins to experience ‘male lack’ as its whole body digital scan system locks into the luscious image of Sana.

This paves the way for the second part of the movie, as a corrupting virus, the ‘Red Chip’, is deliberately inserted into Robot’s central drive by a rival scientist. All hell breaks loose as the programme mutates from ‘Robo-Cop’ to ‘Terminator’. This metal-trap that has inexplicably acquired ‘desire’ turns savagely upon its own creator. Blinded by fury at being spurned by the woman he ‘loves’, Robot turns Rakshasa and, much like Ravana, abducts the heroine to his cordon sanitaire. Only, this Ashokavatika is some super shopping mall.

Recklessly mixing metaphors, writer/director Shankar dips into the fable of Jason and the Argonauts. The robot begins to clone himself in autotelic abundance—a Rajni army of infinite Rajnis. It’s like some consumer excess to the power of ‘z’. There is such a surfeit of Rajnis on the screen that no one will ask for another Rajni film for a few years.

Employing the device of the self-duplicating Rajni machine, the hitherto alienating-yet-plausible-pseudo-scientific gimmicology tips into top gear. What the scientist had originally planned as a one-body war-machine to decimate “India’s enemies” performs a self-fulfilling fantasy as it takes on the collective might of the Indian army, air force and all other comers.  Finally, the robot’s creator finds a way to trap him and disarm the Red Chip. With his ‘chips’ down, Rajni Robot is happy to collaborate with the state. Thalaiva, we preferred you as the eternal ‘outsider’ who proved it by simply flipping a cigarette in his mouth. This high-tech robs you of your aura.

The piled-on techno fads, one more breathless than the other, are psychologically traumatic. You can visibly experience the Castration Complex at work—a sense of emasculatory helplessness in the audience. Fans who came for a joint celebration of shared power sense their agency being appropriated by the merely technical. Which accounts for the dazed silence as the movie concludes. What remains is the overarching human stench in the auditorium.

This Alien Is Our Own