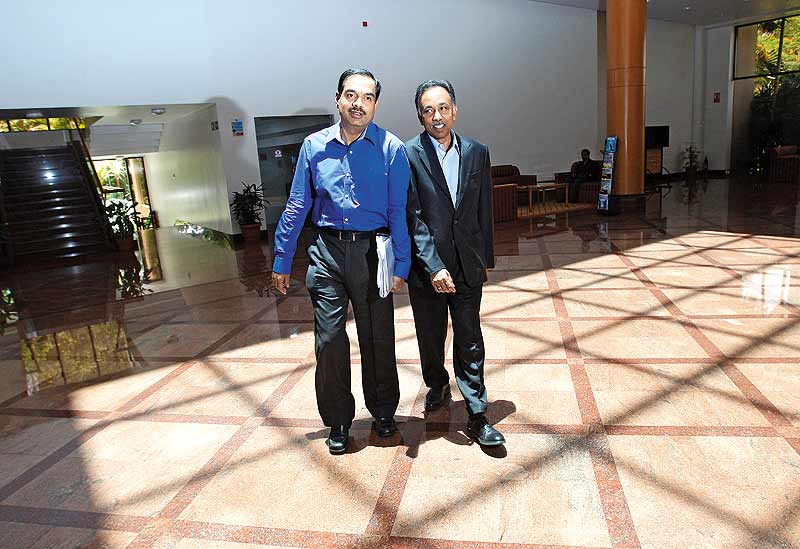 You don’t need to wade through row after row of software code to glean that there’s something awry at India’s second-largest software company, Infosys. The pink papers recently headlined that V. Balakrishnan, till recently Infosys CFO, could be its next CEO. Then, Infosys mentor Narayana Murthy openly batted for Balakrishnan as a future CEO. All this posturing is a bit odd, as Infosys’s incumbent CEO D. Shibulal has just completed a year and still has over two years to go. What’s going on?

The push for Balakrishnan—who, it was recently announced, would head the company’s India and BPO operations—comes at a time when there is a simmering discontent within Infosys about its leadership, business strategies and future prospects in these uncertain times. Employee morale is at a low and most employees feel overworked. Till earlier this month, there was also a freeze on pay hikes and promotions, which did not help the overall atmosphere.

While Infosys’s responses did not reach Outlook before going to print, an employee spoke on the condition of anonymity. “There seems to be no direction in the company and the current leadership seems clueless about how to handle the situation. This is different from earlier regimes, when things were dynamic and aggressive.” It’s no secret that there’s a buzz that the old guard at Infosys is unhappy with Shibulal’s functioning.

In the last year-and-a-half, the company, which normally beats its own expectations in sure-footed performance, has been stumbling. Last week, its Q2 results disappointed again, reaffirming the belief among investors and analysts that all is not well. Although the firm recorded quarterly profits, it cut its earnings per share guidance for the full year both in US dollar and rupee terms. Its operating margins are under pressure and analysts feel that it will have to grow significantly for the remaining quarters to meet even its lowered guidance of 5 per cent.

“Infosys is not in an enviable situation. Mid-sized firms are doing much better. The competitive landscape is also different .”
Arjun Malhotra, Chairman, Headstrong

That could be difficult as Infosys’s revenues grew by 3.4, -1.9, -1.1 and 2.6 per cent in the last four quarters. In the first quarter of this year (FY 2012-13), its growth actually fell by 1 per cent quarter on quarter. Analysts feel Infosys has been slow in adjusting to changing market realities and has been inflexible in a constantly shrinking market. This not only reflected in its performance, but also put it way behind peers.

For instance, say analysts, the company continued to focus on ‘high quality revenues’ through consulting and, due to this bias, neglected bread-and-butter services such as BPO and infrastructure management services. In the latter, Infosys grew by just 10 per cent while TCS and HCL Techologies grew by 35 per cent and Wipro by 13 per cent. Companies like Cognizant have also been more aggressive in client mining (getting more out of clients) and Infosys’s investment in front end staff has been lower. “Infosys’s high-end revenue is not growing,” says Pratik Gandhi, technology analyst at IDBI Capital Market Services.

Shibulal’s tack is to take the inorganic, acquisition-led route, dubbed Infosys 3.0. But this, many feel, is ambitious and risky, considering that it puts too much stress on a product platform strategy fast losing significance. Says Arjun Malhotra, chairman, Headstrong, “It’s not an enviable position to be in. If you fiddle with a successful position, not many people will be happy, but under the circumstances, Shibulal has no choice. Today the mid-sized companies are performing better. They are saying the right things and analysts are giving them a thumbs-up. Your competitive landscape is different.”

Infosys has also been sitting with a massive cash pile of $4 billion, much more than anyone else in the sector, without going aggressively for acquisitions. Last month, it acquired Swiss SAP company Lodestone for $350 million. But this acquisition, which came four years after its failed attempt to acquire Axon (which finally went to HCL Technologies, and was of a higher value), may have come in a bit late. Although Lodestone would bring in many new clients, it may not be what Infosys needs at this stage. Says Ankur Rudra, technology analyst, Ambit Capital, “The momentum the company needs at present may not be met with this acquisition.”

“Infosys tried to maintain a premium pricing as compared to its peers. This does not suit the demand situation.”
Ankur Rudra, Technology analyst, Ambit Capital

Industry leaders blame Infosys’s own culture of arrogance for many of its misfortunes. According to a CEO of a leading software company, while TCS and Cognizant were always ready to negotiate on pricing, Infosys was extremely arrogant and lost big deals. This is affirmed by analysts. “One of the issues with Infosys is also that it has tried to maintain a premium pricing as compared to its peers that have provided similar quality at much lower rates. This does not suit the current demand situation in commoditised services,” says Ambit’s Rudra.

As a result, the top management had to take many unpleasant decisions, including freezing pay hikes and promotions, which (naturally) did not go down well with employees. Also, under Shibulal, Infosys has been unable to retain some of its top talent. In the past one year, it has lost its former board member T.V. Mohandas Pai, BPO head Ritesh Idnani, sales head Subhash Dhar and head of financial services (consulting) in the US, Shaji Farooq, who joined Wipro.

This crisis of confidence is unlikely to end soon. Analysts advising clients to hold on to Infosys shares are changing their line to ‘sell’. Some moves of desperation are also showing. Considering that the company’s performance has not improved, the pay hike announced earlier this month seems more like a kneejerk reaction to pacify employees. Infosys is reportedly also offering upfront payments while bidding for large contracts, something it has never done.

In 2014, Infosys will turn a new chapter when it would have, for the first time, a non-founder professional as its CEO. Last year, Infosys brought in its first professional leader when it appointed industry veteran K.V. Kamath as chairman. But a year later, the company’s fortunes have not picked up. Bala, meanwhile, is one of the few long-timers left at Infosys. He is not a techie like the earlier CEOs, but is a financial wiz. Why, even Narayana Murthy has said that Bala is the company’s future. Infosys’s 1.5-lakh strong employee base would desperately hope that his instincts are right.