Can the incipient people's movement threaten the dictator? Updates 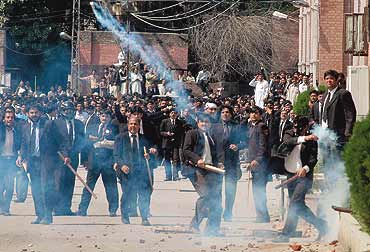 outlookindia.com
-0001-11-30T00:00:00+0553
Pakistanis are outraged. Finally. They are out on the streets protesting against President Pervez Musharraf, braving lathis and teargas shells, in the process ripping apart the facade of Pakistani democracy to reveal an authoritarian regime accountable to none. As Islamabad flaunts its iron fist, and ordinary Pakistanis display unusual fearlessness, the troika of judiciary, media and civil society groups have combined to demonstrate the sheer hollowness of Musharraf's 'enlightened moderation'.

The drama called 'Tumult in Pakistan' had five distinct acts, each containing ample Shakespearean flourishes to provoke the audience—the country's teeming millions who watched the actors play their roles on their TV sets.

Act I: On March 9, Musharraf, dressed in uniform, summons the chief justice of Pakistan, Iftikhar Mohammad Chaudhry, to the Army House. Present there are official photographers and a TV crew to record what the establishment believes is a necessary, legitimate display of the president's supreme authority. He and the CJ are closeted for nearly five hours; Musharraf reads out the list of charges that the cabinet of PM Shaukat Aziz has preferred against Chaudhry. Presumably, Chaudhry replies to the charges. The president says he's referring the charges to the Supreme Judicial Council (SJC) and restrains the CJ from performing his official functions.

Act II: With deputy CJ Rana Bhagwandas away on holiday in India, the next senior-most judge, Javed Iqbal, is sworn in as acting CJ, even before Chaudhry leaves the Army House. (Bhagwandas is now expected to take over as acting CJ as he's the senior-most.)

Act III: Chaudhry is 'forced' back to his residence. His telephone and cable TV connections are snapped; no one is allowed in or out, his personal staff is replaced. The man who was, till a few hours ago, the CJ of Pakistan is held incommunicado, like a 'dreaded criminal', without a single charge having been heard.

Act IV: On March 13, Chaudhry is to appear before the SJC. The nation watches in horror the arrogance of the police. Not willing to allow Chaudhry to walk to the court as he refuses to use the official car, they grab him by the hair and push him into the car; his coat is torn in the melee. At that moment, a hero is born—through those few minutes of TV footage, he has taught the nation defiance.

Act V: On March 16, Islamabad's Constitution Avenue and the adjoining Blue Area becomes a battleground between security forces and agitators, who are beaten and teargassed. Enraged at the media's role, policemen barge into the offices of Geo Television, The News and Jang, and embark on a destruction spree. The following day, the Punjab police enters the Lahore High Court and mercilessly beats anyone on two legs—and protesting. On TV, the nation watches the agitators bleeding profusely. 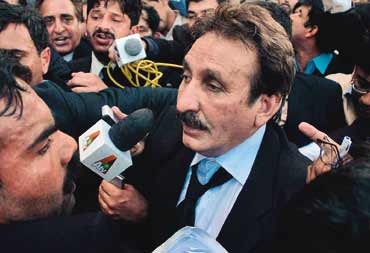 A movement, however incipient, has been born, a movement that's as much a protest against the general's arrogance as it is in support of Chaudhry. Lawyers countrywide are on strike, a handful of judges have resigned, as has the government's deputy attorney general, Nasir Saeed Sahikh, who said, "I cannot work in this system, particularly in the ongoing crisis."

Clearly, by refusing to succumb to Musharraf's pressure, Chaudhry has created an ever-growing territory of dissent. Politicians who met Chaudhry in the days following March 9 narrated to the media his version of what had transpired in the five-hour meeting between him and Musharraf. For instance, former law minister Syed Iftikhar Hussain Gilani told Outlook, "I met him twice at his residence and once in the court. He revealed that the president had given him two options, either to resign and the government would take care of him which meant he would be accommodated in some lucrative post, and second, to face the reference. Chaudhry told Musharraf that he would face the reference." Such stories enhanced Chaudhry's stature, turning him overnight into an example of dignity and defiance, a necessary corrective, in the form of an independent judiciary, to an authoritarian regime.

Not that Chaudhry, a son of a mere policeman in Balochistan, needed such props to enhance his stature. Popularly known as the 'people's judge', he worked overtime to clear the massive backlog of cases in the Supreme Court, never hestitating to step on the toes of the rich and the powerful. Whether it was saving a public park that was to be converted into a golf course or with ecologically aware decisions like nixing the plan to build a New Murree city, or issuing suo motu notices in favour of the poor, Chaudhry had blazed a trail for judicial activism. He even annulled the government's plan to privatise the Pakistan Steel Mills, saying the decision had been taken in "indecent haste".

But what earned him accolades from the people, and the ire of the government, was his response to those agitating outside the Supreme Court demanding to know the whereabouts of their missing relatives. Known here as "disappeared people", their numbers run into hundreds. Chaudhry asked the government to explain these disappearances. As the Friday Times wrote in its editorial, "His worst crime was his insistence on enforcing the writ of habeas corpus in favour of hundreds of persons who had been abducted by the secret agencies of the military and confined without due process of law.... This was anathema to the establishment which has got used to its unaccountable and domineering status."

Many find it bewildering why Musharraf should have taken on an independent judge such as Chaudhry. But then Musharraf had his own compulsions. Wanting to get himself elected for another term by the current electoral college (members of Parliament and the four provincial assemblies), he was apprehensive of the Supreme Court under Chaudhry admitting a possible petition asking him to renounce his uniform. Pervez Hoodbhoy, who teaches at the Quaid-e-Azam University, explains why it's crucial for Musharraf to simultaneously wear the two hats of president and chief of army staff: "Men who live by the gun are willing to die by the gun, and Musharraf is not taking chances. He knows the real threat to his power—and his life—comes from within his constituency, the military. As a result, he has become obsessed with micro-managing everything from troop movements to postings and promotions, all of which require his personal stamp of approval." 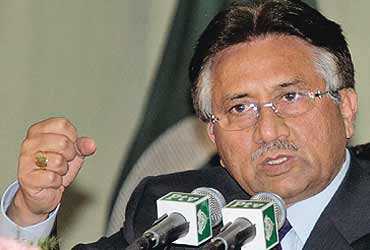 Pundits say it was for this reason that the government (at Musharraf's behest, obviously—nothing here moves without his consent) prepared a 17-page 'reference' against Chaudhry, hoping to browbeat him into resigning. Eleven of the 17 pages include allegations against Chaudhry for misusing his power to get his son appointed into the police service, using a fleet of cars contrary to rules, his insistence on protocol, flying in planes and helicopters he was not entitled to and even the use of a BMW car by a family member. The establishment hoped Chaudhry would resign instead of facing his fellow judges in SJC to defend himself.

The government, obviously, had not bargained for Chaudhry's spunk, or the response of lawyers, who otherwise haven't had a defining role in the history of popular protests here. Columnist Ayaz Amir wrote, "How different this time: Blackcoats in front, first at the barricades, the nation behind, drawing inspiration from their courage and example. My Lord the chief justice is thus proving to be a catalyst of a larger discontent. All the issues swept under the carpet for the last seven-and-a-half years are coming into the open".

Human rights activist Asma Jehangir says the fervour of lawyers is more a reaction to the military rule than anything else. "Pakistanis have matured. They can clearly see through the hypocrisy. The lawyer's movement has acquired a broader agenda, addressing the survival of civil institutions under the weight of militarisation. Their support has widened, not out of love for the judiciary, but because of the shared abhorrence of military rule," she told Outlook.

This impulse may prompt those fighting for Chaudhry's cause into further embarrassing Musharraf. For instance, Chaudhry's chief defence counsel in the SJC, Aitzaz Ahsan, says he plans to call Musharraf to the proceeding and ask him to explain the real motive behind the reference. "I should be allowed to cross-examine him on oath in an open trial. If an US president can do so, why shouldn't the referring authority here be subjected to the same treatment?"

But ennui might set in as the council's proceedings are expected to drag on for months, consequently dissipating the popular anger against Musharraf. This problem is compounded by the disarray among the Oppositon. Some are hopeful of Benazir Bhutto providing a direction to the movement. On March 21, she flew down to London from New York to meet former PM Nawaz Sharif, in the quest to evolve a strategy to bolster the anti-Musharraf movement.

Indeed, this could be Pakistan's tryst with destiny. Says Hamid Khan, another counsel for Chaudhry, "God forbid if the dictator succeeds in his designs, our country will be in a state of turmoil. We must join hands to avert that. I would request the judges not to succumb to any pressure. If they can't rise to the occasion, anti-democratic forces will become stronger and people will lose confidence in the judiciary."

Should the SJC withstand the immense pressure of the establishment, Musharraf could suffer from prolonged bleeding. Couldn't he beat a retreat to defuse the crisis? In such an eventuality, not only would his prestige suffer irreparably (some already call the crisis Judicial Kargil), but he must be prepared to doff his uniform, allow exiled politicians to return and swear in an interim government to supervise a free and fair election—these have to be the concomitant aspects of a retreat.