New Delhi leads the pack in establishing ties with the new dispensation, hoping for a larger role 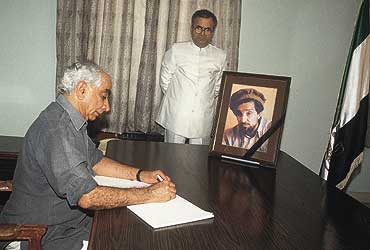 outlookindia.com
-0001-11-30T00:00:00+05:53
It was only on November 18, Sunday, that Indian Foreign Service officer Gautam Mukhopadhyay, who had been on a year-long stint in Delhi’s National Defence College, was sounded out about the external affairs ministry’s decision to re-open the diplomatic mission in Kabul. The nitty-gritties were sorted out on Monday and the decision was now final: New Delhi was to open the diplomatic mission in Kabul exactly a week after the Northern Alliance (NA) swept into power.

Two days later, Mukhopadhyay, S.K. Lambah, special envoy to Afghanistan, and Arun Singh, joint secretary, among many others, including a senior diplomat from the Afghan embassy in Delhi, were on board the air force IL 76 heading for Kabul. In addition to video tapes of Bollywood blockbusters like Lagaan and KKHH (Indian films are a big hit there. Anarkali, for instance, ran for three years in Kabul), the delegation also carried an Indian flag.

The aircraft landed at Bagram airport, 30 km from Kabul, at 9.55 am, without the assistance of the Air Traffic Control. There were no other planes on the runway. Says a senior diplomat who was part of the delegation: "We arrived at a barely-functioning airport, no ATC, no local assistance." Among the first things the delegation did immediately after alighting was to ring up foreign minister Jaswant Singh and appraise him of their safe landing without any incident. It was only then that Singh informed the Rajya Sabha of the government’s decision to re-open its mission in Kabul.

A convoy of three Mercedes Benzes took the delegation to Kabul from the airport, negotiating a stream en route because the American bombings had destroyed the bridge there.

India’s Kabul re-entry last week was as dramatic as its exit five years earlier. On September 26, 1996, 13 staff members of the Indian mission hurriedly left Kabul on the last Ariana (Afghanistan’s official airline) flight to New Delhi, just hours before the Taliban stormed the capital. Diplomats who were part of Wednesday’s trip say that there were conflicting reports on whether New Delhi’s was the first diplomatic mission to land in Kabul or not. One of them told Outlook: "Some told us we were the first, others told us we were the third. But the fact of the matter is we are there."

Once in Kabul, the delegation’s first port of call was the office of ‘foreign minister’ Abdullah Abdullah, nephew of the slain Northern Alliance (NA) commander Ahmad Shah Masood. Life had indeed changed dramatically for Abdullah in the last five years. In 1996, he didn’t have a formal rank in the NA and was simply an interpreter. After the half-hour meeting with Abdullah, the delegation then visited the Indira Gandhi Children’s Hospital, a referral hospital. The delegation, which included four doctors and an equal number of male nurses, had brought along five tonnes of medicines too. The medical team has stayed behind. A Jaipur foot camp is being planned, as unending strife and landmines in Afghanistan have left thousands without limbs.

The delegation then called on Burhanuddin Rabbani, head of the current dispensation in Kabul. He was effusive in welcoming the diplomats, appreciating India’s emerging role in the country, and discussed ways in which New Delhi could help in the reconstruction and rehabilitation process. Dr S.A. Qureshi, an interpreter who had spent many years in Afghanistan, has been re-enlisted for the job and is now in Kabul.

Formal political contact restored, the delegation had lunch at Kabul Hotel, the hosts not eating given it was the month of Ramzan. It was a hurried meal of traditional Afghan fare. The diplomats were working against the clock, scheduled as they were to fly out before dusk, given the absence of night landing/take-off facilities at Bagram. Post-lunch, the team met ‘defence minister’ Mohammed Faheem, chief of Intelligence in 1996, and ‘interior minister’ Younis Qanooni, the defence minister in 1996. Both meetings lasted 45 minutes.

In sum, the four political meetings represent the prospective institutional cooperation between the two countries, in addition to the already ongoing efforts between New Delhi and Kabul in critical sectors including security matters. Diplomats call this fresh engagement "a high-resolution policy."

Government sources central to formulating policy on Afghanistan say they feel satisfied with the way India has been able to carve a greater role for itself in hectic international consultations on shaping the economic and political future of Afghanistan. That the Indian mission was re-opened only days before the Afghans meet in Germany is significant.

New Delhi’s prompt response to the Afghan situation is a far cry from the days it helplessly watched the situation from the sidelines. Sources point out that India was initially not invited to participate in the November 17 Afghanistan donor conference in Washington but was accommodated "at short notice". Sources say this is a measure of US commitment to facilitate a higher profile for India in Afghan matters.

India signalled its high-profile policy on Afghanistan earlier this month by appointing S.K. Lambah, who recently retired as India’s ambassador to Moscow, as the special envoy to the war-battered country. Lambah has hit the ground running, and quickly established ties with his American, British and French counterparts. During his trip to New York to attend the UN meet on Afghanistan, India’s first such foray, Lambah also met the UN Special Representative on Afghanistan, Lakhdar Brahimi. Diplomats call this a tacit acceptance of India’s role in political matters pertaining to Afghanistan. Although India will not be represented in Bonn, external affairs ministry spokesperson Nirupama Rao told journalists last Wednesday that New Delhi would be "monitoring" developments there.

India’s coming of age with respect to Afghanistan is also an indication that the 6+2 process (involving Afghanistan’s six neighbours—Pakistan, Iran, Turkmenistan, Uzbekistan, Tajikistan and China—plus the US and Russia), which was meant to be the main political instrument for bringing peace to the beleaguered country, has outlived its utility and needs re-adjustments to factor new realities. The almost surreptitious manner in which New Delhi re-established political contacts with key NA personnel underlines that an enemy’s (Pakistan) neighbour (Afghanistan) is a friend.

Although discussions in Kabul last week were mostly in the nature of a political reconnaissance and did not broach the possibility of establishing consular presence in other cities, sources say the aim is to establish a presence in areas outside Kabul as well.

Sources also say that the absence of physical access to southern Afghanistan has not come in India’s way of establishing contacts with the non-Taliban Pashtoons. The weeks preceding the formal Indian presence in Kabul witnessed a flurry of behind-the-scene activities that re-established contacts with a range of political and other actors who may have a bearing on Afghanistan’s political future. It is increasingly apparent that there has been some kind of coordination between Russia, Iran and New Delhi, three countries that have rushed to Kabul.

On the way back to the airport, the delegation’s last stop was at what once used to be the residence of the Indian ambassador in Kabul, a property India still owns. This residence, which has in the past taken direct rocket hits, was in decrepit condition. Among the rotting furniture and the debris, a Jaipur foot was sticking out, a vestige, as it were, of previous relations with Afghanistan. The Indian flag isn’t to fly immediately, what with the diplomatic and security staff now quartered in a hotel. As the plane took off, diplomats saw four other planes parked at Bagram airport, a sign of air traffic picking up.