Pakistan smarts under a cricketing slight 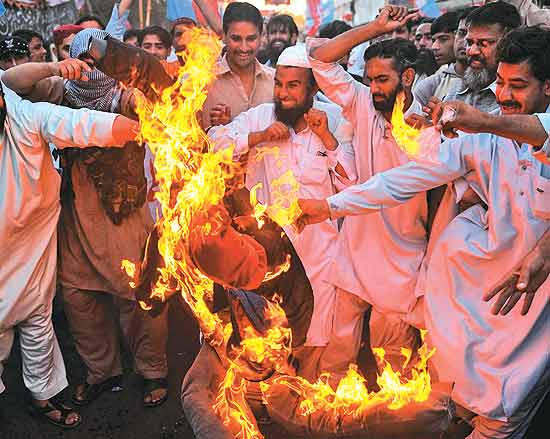 
(O IPL people, don’t make a fool of us
If politics is what you want, come out in the open
Shilpa Shetty has been married away
Preity Zinta has not bid either
There’s much demand for our T20 champion players
For all these you have purchased, one Pathan of ours is sufficient for them

These are lines from the qawwali of Bankay Mian, a popular animation character of Express TV who went on air a day after the eight franchisees refused to bid for a single Pakistani player in the Indian Premier League auction. Bankay Mian’s qawwali soon became a rage in the streets and drawing rooms of Pakistan, articulating as it did the humiliation the nation experienced at the boycott of players who had been crowned world T20 champions only months ago.

Those hours of the IPL auction swept aside the sympathy most Pakistanis had felt for victims of the horror of Mumbai. Gone too was the guilt that 26/11 had been perpetrated by Pakistani citizens. Anger united people and politicians into condemning the IPL in unison, perceiving in its slight New Delhi’s hidden hand.

The IPL auction swept aside the guilt attached to 26/11. Spontaneous anger united people and politicians.

Cricket, politics and diplomacy cohered, as it always does in the subcontinent. Taxi driver Hassan Malik spat out the window and muttered, “They are jealous of Pakistan. India and America are our enemies. They have insulted the stars who won the T20 World Cup.” On another street, a clutch of security guards were huddled around a bonfire, railing against India. “Our war has just begun. On the cricket field we will show our superiority to those Indians,” said one of them amidst laughter. Can we win so easily, I asked. “Our Afridi is an atom bomb,” someone answered promptly. Ironically, the IPL auction made people forget humiliation of another kind—on the cricket field in Australia, where Pakistan went down without a fight.

The National Assembly witnessed an uproar, and decided against sending parliamentarians for the golden jubilee celebration of India’s Election Commission. Cable operators declared they wouldn’t telecast IPL matches, and former cricketers Imran Khan and Zaheer Abbas wanted Pakistan to retaliate by reserving its right to boycott the 2011 World Cup cricket matches. Actress Meera, who has acted in Bollywood, wanted the eight franchisees to apologise to the 11 Pakistani players who couldn’t find a buyer. Interior minister Rehman Malik said cricket is a tool for diplomacy (recall how President Zia-ul-Haq used cricket to open diplomatic channels with India), citing the IPL auction to declare that New Delhi isn’t serious about pursuing peace.

New Delhi’s protestations that it had no role to play in the IPL auction provoked foreign office spokesperson Abdul Basit to say, “It’s clear the decision to not include Pakistani cricketers was influenced by variables extraneous to sports. It’s ironic that instead of requesting sporting agencies to resolve the issue, India is again engaging in a blame game, point-scoring and continuing its unwillingness to resolve bilateral issues through dialogue and peaceful means.”

As cricket became a political issue, The Dawn cautioned in its editorial: “Even if New Delhi is being duplicitous, as some allege, Islamabad should show more grace and refuse to mix politics and sports. Pakistani fans and players have every right to be outraged, not so the Pakistan government.” Yet, ironically, the outrage in Pakistan and its diplomatic fallout perhaps explains IPL commissioner Lalit Modi’s belated U-turn—he opened a small window for the possible participation of Pakistani players.