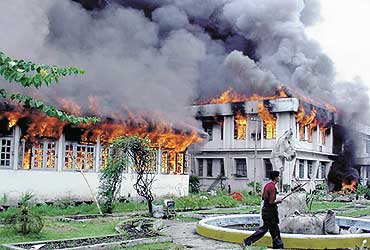 outlookindia.com
-0001-11-30T00:00:00+0553
It was a crisis the Union home ministry could have avoided had it seen the writing on the wall. Opposition to the extension of the four-year-old ceasefire with the dominant Naga insurgent group—the Nationalist Socialist Council of Nagalin (Issac-Muivah)—to areas outside the state in a tribal-dominated region has for long been simmering in Assam, Manipur and Arunachal Pradesh. Leaders from these states have been warning the Centre against extending the truce to ethnic Naga pockets in their domain.

That the Centre was treading tricky turf became clear when mass anger exploded in violence and arson that overtook Manipur last fortnight. Only last September, over 800,000 people had gathered in Imphal and declared their total opposition to any move to extend the ceasefire to neighbouring states. The turnout at the rally should have been warning enough of the serious trouble at hand should the Centre arrive at an arrangement with the nscn(im) that was not acceptable to states outside Nagaland.

The opposition in Manipur, Assam, and to some extent Arunachal Pradesh, stems from the long-standing nscn(im) demand for a Greater Nagaland, which envisages contiguous areas of present-day Nagaland, at least four districts of Manipur, parts of five districts of Assam and two districts of Arunachal Pradesh. Even the Nagaland assembly has twice passed a resolution for the creation of such an entity to bring together Nagas spread over a wide area.

Manipuris, especially the majority Meiteis who inhabit the narrow Imphal valley, fear the spilling over of the truce area as sought by the nscn(im) is nothing but a prelude to the state's vivisection. Indeed in terms of area, the four districts of Ukhrul, Tamenglong, Senapati and Chandel will take away 15,519 sq km out of Manipur's present-day 22,327 sq km area. Assam will similarly stand to lose parts of Golaghat, Jorhat, Sibsagar, Karbi Anglong and North Cachar Hills and Arunachal will lose two districts, Tirap and Changlang. In the context of the political farce that Manipur has been suffering, the provocation proved too much.

The voices of protests, expectedly, peaked to a crescendo after the Centre's decision to give in to the nscn(im)'s demand. While the three state governments are naturally worried about law and order problems in view of the immunity that the nscn(im) cadres will enjoy, even militant outfits in these states are opposed to the territorial extension of the ceasefire.

As Sana Yaima, chairman of Manipur's largest militant group, the United Nationalist Liberation Front (unlf), told Outlook: "The extension of the India-nscn(im) ceasefire to Manipur, Assam and Arunachal Pradesh will not solve any related problem of the region, least of all the Naga problem. The real intention of the Indian government is to create ethnic conflicts in the region so as to undermine its growing unity. So far as the extension of the ceasefire to Manipur is concerned, the unlf does not recognise any ceasefire as such in Manipur. For the unlf, the whole of Manipur will remain a battlefield so long as Manipur's sovereignty and independence is not restored." Likewise, the United Liberation Front of Asom (ulfa) has said in its mouthpiece, Freedom: "Under no condition will the ulfa and the people of Assam negotiate on the present territorial boundary of Assam."

It was not as if the Centre was unaware of the simmering sentiments but it didn't stop the Union home ministry from going ahead and extending the ceasefire "without territorial limits". Nor did it consult the respective state governments, especially Assam (see interview). The consequences were inevitable as large-scale violence and arson erupted in Manipur's capital, Imphal, in which 15 people were killed and two mlas sustained over 60 per cent burn injuries. On June 18, a rampaging mob burnt down many government buildings like the state assembly, the chief minister's secretariat, part of the Raj Bhawan and head offices of several political parties, forcing the state administration currently under President's rule to impose uninterrupted curfew for over 60 hours.

The people's ire against the Centre's decision has emerged on two counts. At one level, the protest was against New Delhi's insensitive handling of the whole situation. At another, it was an anger vented against the scheming politicians in the state who have been doing nothing but jockeying for power for the past six months in an unseemly spectacle of mass defections. Says Khelen Thokchom, editor of The Sangai Express, Imphal's largest English daily: "The mob fury was as much against the Centre's decision as against the unscrupulous politicians who have been busy negotiating deals for grabbing power without thinking about the people who elected them in the first place."

Indeed, as the sequence of events on June 18 indicates, the crowd had initially gathered before the Raj Bhawan wanting to meet Governor Ved Marwah and apprise him of the general sentiment against the extension of the ceasefire to areas outside Nagaland. But when Marwah refused to meet the protesters, the crowd marched to the vip enclave in Babupara area and started attacking ministerial and mla quarters. A section of the crowd went to the assembly secretariat and set fire to the building. They also roughed up Speaker S. Dhananjay, whose political ambitions many believe was the key factor in the recent embarrassing tamasha in the state. Two bjp mlas trapped inside the blazing building sustained over 60 per cent burn injuries and are still battling for life.

The anger against politicians boiled over that fateful day, leading to police firing that killed 13 people. Marwah had no option but to impose indefinite curfew. Clearly, the governor, himself a distinguished former police chief in Delhi, had misread the extent of the latent anger over this emotive issue in Manipur. The home ministry, solely dependent upon the information channel of the state administration, tried to ram through a decision that it simplistically assumed would help resolve the Naga issue. The All Manipur Students Union (amsu) and the All Manipur United Clubs Organisation (amuco) have now asked all the 60 mlas to resign or else face the wrath of the people. To avoid the last, all the mlas and their families have been housed in the protected complex of the 1st Manipur Rifles.

Responding to the demand, at least 30 mlas met in Imphal and decided to give the Centre time up to July 31 to revoke the ceasefire area extension before resigning. Says former deputy chief minister L. Chandramani Singh: "Even if we resign now, no purpose will be served since the assembly is under suspended animation. Instead, we have given a realistic deadline to the Centre to reverse its decision." That is of course easier said than done, since the Centre seems more bent upon salvaging the four-year-old talks with the nscn(im) than bothering about the ground situation in the region.

NSCN(IM) leader Th. Muivah, who succeeded in forcing the Indian government to agree on the ceasefire extension, was ambivalent in his response to the Manipur situation.In a statement from Bangkok, where he is based, Muivah has said that the agreement between the government and the nscn(im) at the moment has nothing to do with the demand for greater Nagaland comprising all contiguous Naga-inhabited areas. However, he did not entirely rule out the possibility of such a demand. "The ceasefire is a ceasefire" and "at the moment it has nothing to do with territories," Muivah told a news agency in Bangkok. About the protest in Manipur over the ceasefire, he said: "They need to think calmly because it is a ceasefire and nothing more than that."

Asked if his faction would think of including other areas in any future homeland they seek, Muivah said, "Eventually, it will be decided according to history. If Nagas would like to join with their brothers, there's nothing wrong." Muivah, in fact, has been talking about extending the ceasefire without territorial limits since the beginning of the ceasefire. Last November, Mizoram chief minister Zoramgthanga, himself a former rebel, had talks with Muivah and Issac Chisi Swu, the outfit's chairman in Bangkok. Then too Muivah had insisted upon three conditions, namely that the ceasefire declaration should be without any area limitation; that the Indo-Naga issue should be recognised as a political one, which needs to be solved through peaceful negotiations involving politicians; and that all the terms and conditions agreed upon earlier should be strictly honoured by both sides.

Even in early May this year when Prime Minister A.B. Vajpayee's emissary, former home secretary K. Padmanabhaiah, had travelled to Bangkok, the nscn(im) leadership had threatened to call off the truce were these terms not met. The government was therefore clearly aware of the demand and could have prepared the affected states for the eventuality.

Following his ouster on May 21, former Manipur chief minister R.B. Koijam had told Outlook that one of the reasons for the bjp backstabbing the Samata Party was the Centre's desire to extend the Naga ceasefire beyond Manipur, a charge not denied by either the bjp or the Centre. Less than a month later, his apprehensions came tragically true.

The government's unilateral extension has come in for all-round criticism. Says a leading northeast analyst: "For Kashmir there are dozens of experts in Delhi but when it comes to the northeast, no one is bothered about understanding the ground realities or the nuances of the situation." Although home minister L.K. Advani did say later that the extension of truce will in no way affect the territorial integrity of the states, the damage has already been done.

With Muivah not ruling out the possibility of a "greater Nagaland", suspicions have only increased. And they will not be allayed unless the Centre can extract a public promise from the nscn(im) leadership that the extension of ceasefire without territorial limits is not a precursor to the creation of a 'greater Nagaland'.

The good doctor erects defences of awareness against killer HIV