Finger On The Pulse?

Manmohan's 'unscheduled' surgery did raise the question. No answer, he's still the best bet for PM. 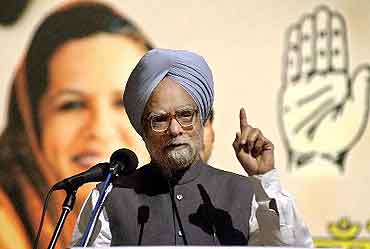 All through last week, the Prime Minister's Office was releasing cautiously worded press statements. Prime Minister Manmohan Singh had undergone a medical check-up, then a "diagnostic evaluation" necessitating a night's stay in hospital and, finally, that "recommended treatment procedures" would be undertaken "after a few days". But when the news broke on January 23 that the PM was being admitted to the All India Institute of Medical Sciences for a multiple bypass heart surgery, it took the nation—and even most Congressmen—by surprise. It was just days before Republic Day—and no PM had missed the event in India's independent history. No question about it, a feeling of uncertainty hung heavy in the winter air.

The PMO spin—or perhaps that was the reality—was different. "Three holidays were coming up, and since Republic Day involves protocol rather than substantive duties, the PM," said sources close to him, "felt it would be best to have the surgery immediately so that he could recover quicker. After all, elections are due in less than four months." But yes, these sources admitted, the media management of the PM's illness had been abysmal. The managers had wanted TV cameras or, at least Doordarshan, to get a visual of a cheerful Dr Singh getting into the car for hospital, perhaps even giving a few soundbites. But the Special Protection Group apparently vetoed the idea, leading to the wild rumours of a medical emergency.