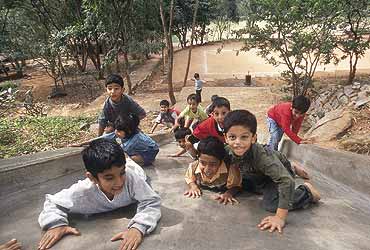 outlookindia.com
-0001-11-30T00:00:00+0553
At The Valley School, the Krishnamurti Foundation India (KFI)-run school in Bangalore, set on a lush green, 110-acre campus, the guiding principles are no reward, no punishment, no comparisons and no competition. Children from age six onwards are taught to value a questioning mind, develop skills in art, sculpture, pottery and dance as in curricular subjects. By Class 9, they are expected to take internal exams as they ready themselves for Class 10 and 12 exams. The parent-school interaction is unique: parents volunteer as part-time teachers in crafts, languages and art. Says director Satish Inamdar: "At KFI schools, we’re still exploring an idea, to see if a human being can be brought up without fear, and in turn awaken the intelligence of a child and allow it to flower."

Wide open spaces. Welcoming absence of a rigid classroom structure. Community eating rooms. No uniforms. No answering examinations in primary classes or conforming to set syllabi. That’s what the alternate school revolution in India is all about—on the surface, at least. But scratch deeper and you find the objective that best defines and unites the alternate school movement is its insistence on being recognised as an oasis that nurtures talent and not an island that offers escape from the melee of mainstream education. The inspiration stems from varied sources but increasingly, these schools are being viewed as a counterpoint to the rigours of conventional exam-driven education that demands proficiency in logico-mathematical skills above other more intuitive ones.

Take Delhi-based Mirambika, an alternate school set up in 1981 with 57 students and now teaching some 135 children. Its motto is learning by asking questions. A free-progress school, Mirambika has no standard classes, just groups up to Level 8 and no uniforms or exams. Languages and mathematics are the only subjects taught in classrooms, the rest is learnt through project work. Teachers are referred to as Didis or Bhaiyas and serve as guides to help the children find their own space and process.

The Valley School has 300 children with at least 60 faculty members, a teacher-student ratio of 1:5. A concept also followed by the Centre for Learning (CFL), an offshoot of the KFI method, now located in rural Bangalore. Says Kabir Jaithirtha of CFL: "When our team of 10 moved away from The Valley School to start off on our own, the idea was to create a school small in numbers to best articulate the principle of learning without fear." CFL now has around 60 children from Class 1 to 12 and runs in a semi-boarding format. From age 12 to 18, students are expected to stay on campus while the younger ones go home on alternate days. The school follows no prescribed syllabus but at the level of Class 10 and Class 12, prepares students to take the Senior Cambridge Exams.

Lesser students and eclectic learning tools have led to alternate education becoming a luxury that only those with means can afford. At The Valley School, the annual fee of Rs 35,000 can be changed based on parents’ income, a system of graded fees that even CFL with a base fee of around Rs 30,000 a year follows. The idea is to attract a cross-section of students, a challenge other alternate schools also face. Says Nirmala Diaz, founding member and trustee of Sloka, the Hyderabad-based Waldorf School that like over 800 Waldorf schools globally follows the philosophy of Austrian educationist and philosopher Rudolf Steiner: "We want to be accessible to middle-class families and still have a class strength of 25. Balancing our cash registers is always a problem." At Sloka, there are no textbooks; children have to devise their own through research and projects. Subjects are taught for two hours a day in blocks of three to four weeks. Children are assessed constantly but report cards are shown only to the parents so as not to intimidate children.

At Bangalore-based Poorna, Indira Vijaysimha too draws inspiration from Steiner’s methods. Her school of 43 children follows a pattern wherein a main theme is chosen for the whole school a year ahead. The theme for 2001 is India and for the first hour of school each morning, children from Class 1 to 10 study age-appropriate topics related to India. Then on, classes for mathematics, language and craft follow without a rigid timetable.

Vijaysimha, a professional teacher, started out in 1993 to "de-school" her three own children. "I wouldn’t knock mainstream education, having taught in that system myself, but the belief that one model fits all situations must go," she says. In Hyderabad, trained educationist Shanta Rameswar Rao started the now 40-year-old Vidyaranya school when her little daughter returned home in tears after being rapped on the knuckles by the teacher. Believing that a school should be a happy place, she began teaching her daughter along with the children of a few other friends and relatives. Today Vidyaranya has over 540 students who study an ICSE syllabus but take no exams till Class 8. "Teachers are given the syllabus only as a baseline. How they cover it is left to them," says the 76-year-old.

Even as alternate education gains ground, questions remain on how efficiently children from these streams can integrate into the world outside the school gates. The independent thinking fostered by these schools can create truly gifted individuals but does also sometimes turn out ‘misfits’. Is there a middle path? This is a question educationists like Alka Mirji at Bangalore-based Prakriya are increasingly asking. Says Mirji: "At Prakriya, we believe there should be rigour. Language and mathematical skills are vital but if a child learns better through colour and pictures, we’ll teach him maths through that method." With students up to Class 6 now, Prakriya hopes to add on a class as the children grow, ultimately training them to take the ICSE exams at Class 10.

Says M. Srinivasan, founder of the Gifted Education and Research Foundation (GEAR) in suburban Bangalore: "We need to prepare children for a changing world but it should be through creative, inventive and productive excellence, not rote learning." At GEAR, students wear uniforms and learn in a classroom situation, but with a difference. Tests and evaluation do exist but they take into account the principles of multiple intelligence and concept-forming skills. In suburban Chennai, the Thai Thamizh Kalvi Kuralneri Thodakka Palli is an alternate school with a difference. Thyagu, its founder, believes education in one’s mother tongue up to Class 3 builds a better-informed and well-rounded personality. To that end, the school, with a monthly fee of just Rs 60, neither punishes nor ranks its students, thus negating any sense of competition. Instead, special classes are taken for children perceived to be slow, proving that alternative is not necessarily "elitist". Says Mirji: "The Multiple Intelligence Theory by Howard Gardener used research to confirm what people already know, that intelligence is of many kinds, not just linguistic or logico-mathematical. Hence we need a plurality in education systems and schools to match each child’s need." And that’s precisely what alternate schools offer.