Fifteen Till I Die

Dravid didn't make it, so you know this is a world-beaters' party. It'll take some beating. 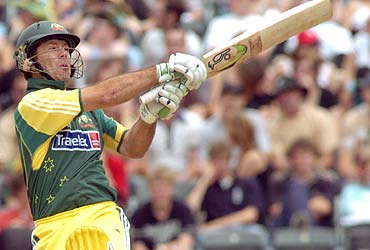 outlookindia.com
-0001-11-30T00:00:00+0553
When I took up the challenge of picking a squad of contemporary players for a World XI, I knew I'd have to get the selection criteria right first. This had to be a squad of players who are fully fit, capable of performing in all conditions, in good current form and with a proven track record. After considerable brainstorming, I arrived at a squad of 15. Many have achieved greatness beyond doubt and some are on their way to achieve that status. They are all bound by the fact that each has fire raging in his belly, eager to make his presence felt with winning performances. Above all, they are men who rejoice in the success of their teammates, each wearing the hero's mantle with elan and dignity. A youngster could pick any of these 15 to emulate and can be sure of having picked the best he could.

The left-handed Sanath Jayasuriya may be past his 37th birthday but he recently showed in England what a destructive batsman at the top of the order he can be. Age hasn't withered the Sri Lankan blaster's skills. What can I say of India's own Sachin Tendulkar, except that the man's record speaks for itself? The DLF Cup in Kuala Lumpur showed the fact that he is fit and hungry for runs. His return is not only good for India but also great for the game itself. Adam Gilchrist is another who holds onlookers spellbound and frustrates bowlers with his attacking batting. In my book, the Australian is the most aggressive left-handed batsman in either form of the game today.

Australian captain Ricky Ponting leads by example and is the perfect man to bat at No. 3. He would be my choice to lead the side as well. The West Indies skipper Brian Lara has shown that he is a genius when he puts his mind to the job and I am sure he will love the challenge of shining among a bunch of superb cricketers. England's Kevin Pietersen is a hugely talented cricketer who has been consistent as well, and is brilliant on the field. His captain Andrew Flintoff (I believe he has regained fitness) is the world's best all-rounder and an automatic choice in this squad.

Michael Hussey has been outstanding since the time he entered the Australian team and has grown in stature with such a consistency that he would be a sure-shot selection. Jacques Kallis can be the rock in the middle order and gets into the side ahead of India captain Rahul Dravid only because he brings value to the team with his swing bowling as well. Andrew Symonds has been a key player for Australia in the ODIs in the past few seasons and is such a powerful striker of the cricket ball that you cannot ignore him when you choose a squad like this. He is a brilliant fielder too, and offers the captain so many options with bowling. 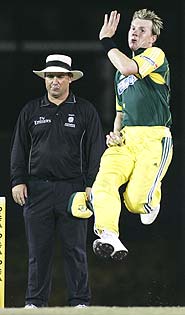 Talking of the bowling, it would be a delight to watch the South African epitome of parsimony, Shaun Pollock, share the new ball with Brett Lee, who bristles with aggression. The South African has stood the test of time and his vast experience will be very handy. He gives so little away and even after all these years he still has the best economy rate among contemporary bowlers. Don't also forget that his skills with the bat can be handy for the side—not that a squad like this would need them to come into play.

Lee will be in anyone's squad for being an out and out pace bowler. He is maturing now, delivering rapier thrusts with both the new ball and the old. The Australian is also emerging as a clean striker of the ball, lower down the batting order. There are a number of fast bowling all-rounders so I reckoned we would not need a specialist quick bowler, except to add Pakistan's Shoaib Akhtar for his raw pace and aggression as a cover for Lee.

I am left with the task of picking up the two best spinners in the business today. The two off-spinners Harbhajan Singh and Muttiah Muralitharan walk into my squad of 15. Bhajji has been doing a wonderful job in ODIs for India and is the kind of spinner who is ready to rise to a challenge while Murali has shown over the years that he earns the respect of batsmen on any wicket. On a track assisting spin bowling, Ponting may want to explore the juicy prospect of bowling the two off-spinners in tandem. 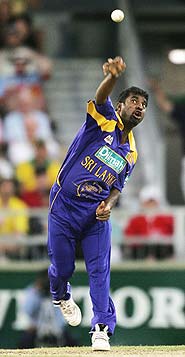 Hard as I tried, I could not find any left-arm seam bowlers or left-arm spinners who can take a place in the squad on the basis of the criteria I laid down for myself at the start of this exercise. This attack has the quick bowlers, those who can move in the air or off the pitch and even reverse it, while the slower bowlers can be a handful for the best of the rest.

Of course, there are a number of players on the fringe who can get into the team in case of an illness or injury to any of those chosen. Having to leave out guys like the West Indies opener Chris Gayle, Dravid, Sri Lanka skipper Mahela 'Consistent' Jayawardene, India's dynamic Mahendra Singh Dhoni and Pakistan paceman Mohammed Asif is not the easiest thing to do but, viewed conversely, it shows the high quality of players chosen ahead of them.

Come to think of it, the squad is one that will take some beating. This is a bunch of players who believe in themselves and are game for a challenge anytime. Can you top that? And yes, I know I haven't chosen an XI. I would always leave that task to the captain. It has been great fun and at once a headache to pick 15. Ponting—or you—can get down to the task of choosing a playing XI from this squad. Won't that be fun?