If Messi and Neymar have one thing in common, it is a near-fanatical hunger for victory. 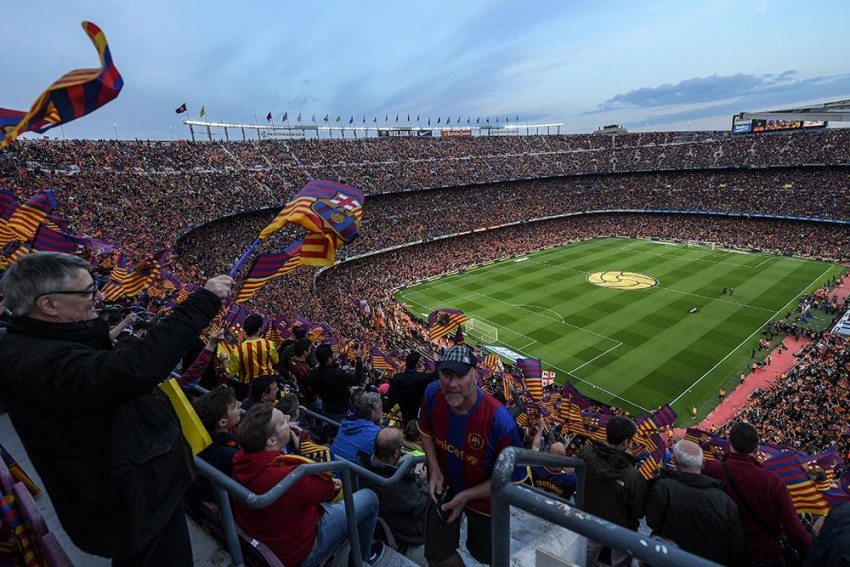 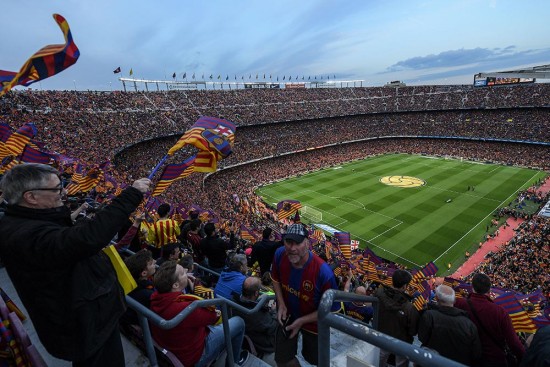 As a child, I fantasised about my name going up on a wall at the Camp Nou, the home stadium of my favourite club, FC Barcelona. Four years ago, I achieved that goal… after a fashion. Blow-ups of two Time Magazine covers I had written, featuring Barca stars Lionel Messi and Neymar, went up in the press gallery of the stadium, and since I had cover bylines in both instan­ces, my name went up on that wall too. It wasn’t quite the fantasy I had in mind as a 10-year-old—in that dream, my name would be added to the list of the club’s top goal-scorers, alongside such legends as Josep Samitier, Lazlo Kubala, and Johann Cryuff—but I’ll take it.

I am proud, perhaps inordinately so, of those two covers. Much of my career as a journalist has involved writing about conflict and geopolitics, but in truth my favourite assignments have always been sports stories. Interviewing Messi in 2012 is at the top of my list, followed closely by the Neymar profile in 2013; the two Sachin Tendulkar covers, in 1999 and 2012, rank third and fourth.

Interviewing Messi is at the top of my list of ­favourite assignments, followed by the Neymar profile.

When I met them, Messi and Neymar were, respectively, two and one year away from the ultimate test of their greatness: the World Cup. Both would fail that test, under dramatically different circumstances. A quarter-­final injury meant Neymar couldn’t feature in Brazil’s 1-7 humiliation at the hands of Germany, and while Messi was able to carry Argentina to the final, he couldn’t find a way past the eventual champions.

Now, both men confront that test again. For Messi, who will turn 31 during the first round of the tournament in Russia, this could conceivably be his last opportunity to end the debate of whether or not he is the greatest player to have graced the game. It’s hard to see those amazing legs carrying him through the heat and dust of Qatar in 2022. Neymar, now 26, can look forward to Qatar, but he knows better than most players how a single turn of a knee, or a mistimed tackle by a defender, can turn a World Cup into a tournament of tears—so he will want to make Russia the stage of his greatest triumph.

I’ll leave it to professional sports analysts to compare Messi and Neymar as players. But as personalities, they could hardly be more different. Messi is shy, painfully so: throughout our interview, he stared at the floor and at his sneakers, only occasionally meeting my eye. His life outside football is int­ensely private. Despite being the prince of Barcelona since his late teens, you’ll struggle to find more than a handful of candid pictures of him in the city, shopping, going to the cinema, or a restaurant. Even bef­ore he got married, he was never seen with the obligatory supermodel on his arm, nor ­reported to be.

He may have lived in Barcelona for the past 18 years, but his accent seems never to have left his ­native Rosario. He has very few friends, and they tend to be mostly fellow-Argentines. When I asked him, in 2012, with which player he socialised most, he pointed to Xavier Mas­cherano. His wife, and mot­her of his three children, Antonella Roccuzzo, is the cousin of one of his childhood friends in Rosario.

Indeed, Messi seems to have no life outside the sport. When I asked him what he did when he wasn’t playing or training, he was genuinely mystified. “Nothing,” he said. I pressed him, asking how he relaxed at home. “Oh, I play video games,” he said. What video games did he like? “Football games,” he replied, with an expression of surprise that I should even ask such a question. 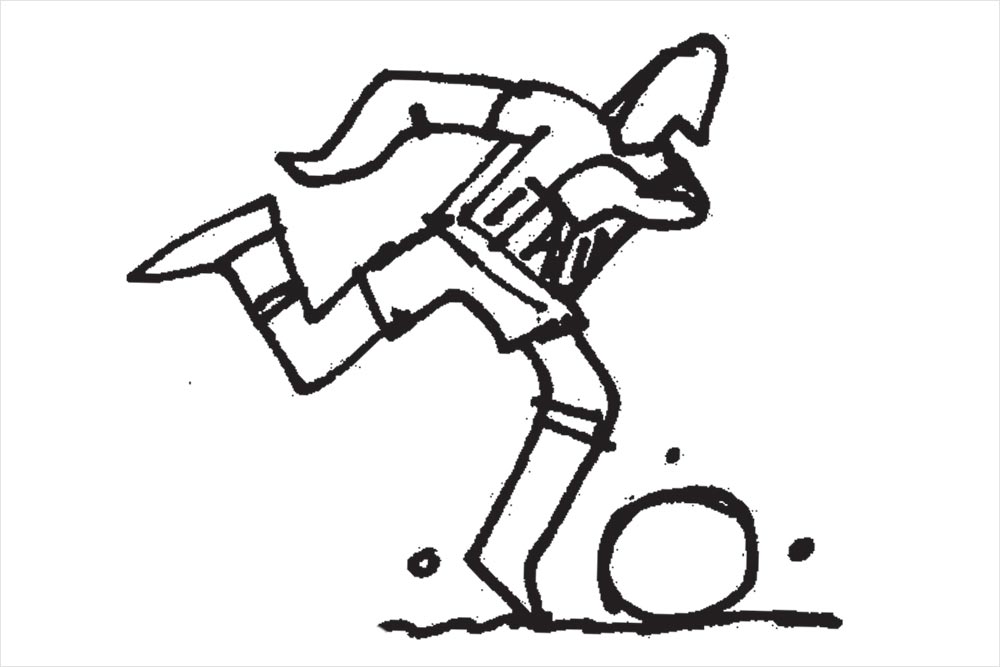 Italy became the first host country to go through a ‘qualification process’, for the 1934 World Cup. They also became the only country to win a World Cup without the defending champions, Uruguay (they were the winners in 1930), participating.

Football is Messi’s all-consuming obsession. But, as the late Xavier Batalla, a great Barcelona journalist, exp­lained to me, Messi is not a fan of the sport in the same way as you or I. “Leo doesn’t love football, he loves to PLAY football,” Batalla said. “He’s not interested in the game’s history, or its social context, or anything else. He simply wants to play.”

Neymar, on the other hand, was an extrovert from the ­moment he burst upon the nat­ional scene, as a teenaged wunderkinder at Santos, the club that gave the world Pele. He was frequently seen partying with musicians, a new girlfriend at every gig—he was a father at 19. By the time we met, in 2013, he had matured somewhat, attributing it to his deeply religious teammates in the national squad, like Kaka. “But I can still be naughty,” he told me, flashing a wink at his father who sat in on the interview. “I’ve given him enough trouble.” (“That’s true!” Neymar Sr agreed.) 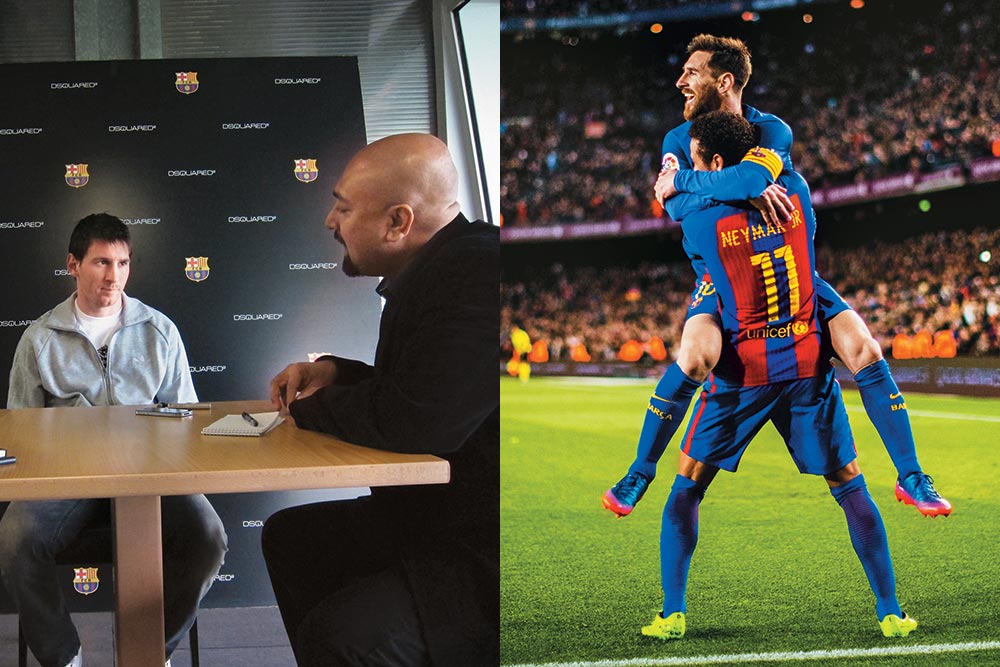 The author’s memorable interview with Messi in 2012; Messi and Neymar celebrate a goal for Barca

For all his flash off the field, Neymar is a cold-eyed professional on it. He is, along with David Beckham and Cristiano Ronaldo, the consummate 21st century sports star, comfortable in the glare of publicity—and indeed, happy to capitalise on it—while remaining single-min­dedly dedicated to becoming the best footballer he can be.

If he and Messi have one thing in common, it is a near-fanatical hunger for victory. At Barca, teammates and coaches told me of how Messi would sulk after losing practice games, and sometimes sob in frustration after losing a competitive match. Neymar’s teammates at Santos (at the time of our interview, he had not yet moved to Barcelona) spoke of his personal drive in similarly awe-struck tones. I imagine that’s what allowed them to bond at Barca: each saw in the other a reflection of himself.

As a Barca fan, and as someone who had spent time with both of them, the years Messi and Neymar shared on the pitch were a special joy: I fancied that I could see an interplay of their personalities in the way they passed and made space for each other. When Neymar moved to Paris last year, I was disappointed, not because one of those covers came down, but bec­ause I lost my own private connection to the magic. My loyalty, needless to say, ­remains to the club.

Will their common obsession to win take one of them all the way in Russia? It’s always possible that neither of them will make it, but each of them has the talent and the application, and each deserves to crown his career with the greatest prize.

Still, I don’t envy the odds-makers whose job is to rate the chances of Messi or Neymar lifting the trophy on July 15, but it will be a very special birthday present for me if it is the man alongside whose name every 10-year-old Barca fan today dreams his own will one day go up, on the wall at Camp Nou.

(Bobby Ghosh is a Barcelona fan. He was until recently the editor-in-chief of Hindustan Times.)

FIFA World Cup 2018: Can An African Nation Make To The Last Four?