Field Glasses To Make You Think

Aiming at a grand strategy for India through multiple strategic scenarios of net assessment, this book argues for an imaginative calculation of our various futures 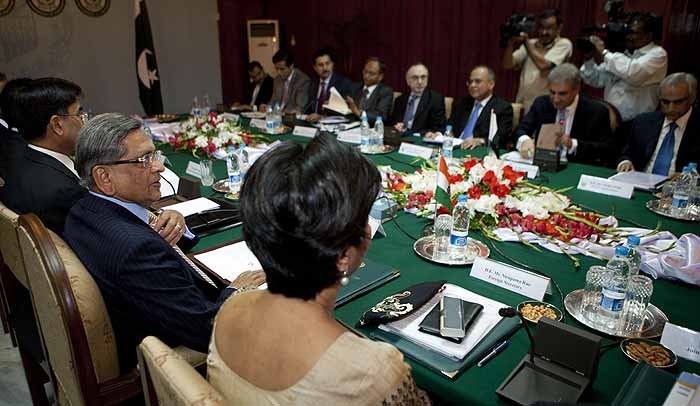 The title alone is enough to excite massive institutional and cultural teeth-clenching in India’s corridors of power. For when has New Delhi ever taken a “long view” of anything? It seems preternaturally predisposed to looking inward, to pass its views of India’s place in the future and its interests in possible alternative worlds through a set of powerful cultural filters that favour restraint, incremental movement, and long debates over competing alternatives. This at a time when the world around India is changing rapidly, with more actors flexing, converging or colliding strategies in pursuit of often antithetical objectives while boasting powerful capabilities. India’s half century of strategic introspection is a poor vista from which to address these challenges.

Institutional capacity for thinking “big” or “long” or “detailed” exists in only a few places in India’s sprawling bureaucracy. As Ashley Tellis notes, its few senior leaders, often diplomats, base their decisions about the world largely on intuition received from limited general education and good family ties, bereft of the kinds of special knowledge and training necessary for understanding today’s complex strategic dynamics. Moreover, the Berlin Wall that exists between the civilian and military sectors of Indian society discounts a critical mass of focused intellectual power that possesses strategy in spades, an anomaly among modern states with integrated security and strategic planning. Military people almost by definition draw sustenance from an appreciation of why and how states compete, and of their ability to harness power—a distinctly uncomfortable notion in New Delhi—to achieve objectives.

Menon and Kumar tilt menacingly at this familiar windmill. But their aim is different from an analysis of the challenges and opportunities of particular directions for India’s foreign policy as one finds, for example, in the seminal work of the great K. Subrahmanyam or more recently of C. Raja Mohan. They do not attempt to offer a foreign policy at all, which is but one part of a Grand Strategy for India. Instead, Menon and Kumar focus on what strategists need to know for thinking about how any grand strategy might be built and how they must first grapple intensively with potent ideas that lie beyond immediate observation but not imagination.

In its use of scenarios to illustrate this last point, The Long View From Delhi echoes an earlier classic, Peter Schwartz’s The Art of the Long View, an indispensable analysis of the scenario-builders’ art. Like Schwartz, Menon and Kumar use provocative scenarios to illustrate driving forces behind a range of possible alternative futures for India—politics, economics, demography, ideologies, resources, culture and so forth. They demonstrate how grand strategy-building begins by mixing these driving influences, including those we might not see at this time but which are probable, possible or plausible, in different proportions to produce varied outcomes that will not result from linear analysis of today’s observable trends. Their implicit matrix has many cells filled with things that interact in complex ways. Understanding how these outcomes or influences could affect India’s vital interests—indeed how they might define these interests—is a basic building block of grand strategy.

Four global scenarios frame their approach. In the first, the US “reinvents itself” and leads in the development of alternative energy resources, with huge implications for world hydrocarbon energy markets and, hence, many countries’ security strategies. The second scenario traces the US’s decline and the emergence of a multi-polar world with regional hegemons: India in South Asia and its maritime environs, China in continental Asia, and the US and Brazil in their hemisphere. This is a world of considerable comity, but of little cooperation against threats like terrorism. In the third scenario, China and the US cooperate to control world institutions, leaving other powers, including India, with little room for manoeuvre. A final scenario paints a tapestry of depressed economic growth in China and the US, while India surges ahead with robust growth. Consequently as the US slides toward isolationism, India struggles to find ways to become a resilient regional power and an effective global one.

This is neither storytelling to forecast the future by stealth nor a fictional effort to discover the most probable future, thereby absolving analysts of difficult intellectual work, or giving policymakers the green light to invest India’s resources fully on the chosen “winner” in the futures stakes: both classic mistakes that Menon and Kumar seek to avoid. Each alternative future potentially contains multiple pathways into it; it is these pathways and the competitive dynamics that might lie along them that they seek to reveal.

But they go further. Placing scenario development at the front end of a process of “net assessment”, the authors underline how successful grand strategy can emerge only from a comprehensive understanding of the competitive strengths and weaknesses of India and its likely adversaries. In this, they tip their hat to the work of America’s famed Office of Net Assessment, which is part of the Office of the Secretary of Defense, and to its director Andrew Marshall, a powerful influence on their thinking.

A potent grand strategy can emerge from a total understanding of the strong and weak points of India and its adversaries.

The net assessment process is a comparative analysis of what makes for military power, including political, economic, and technical expertise. Among other things, it seeks to analyse the character of possible military competition, usually in the future, and to discover areas likely to be the most important; to reveal how one’s own and a competitor’s values shape the competition; to identify key trends and asymmetries that are likely to give the competition its contours and its scale; and uncover the greatest areas of opportunity and risk for both oneself and one’s competitors. Net assessment is diagnostic, not prescriptive in character, which is why it meshes comfortably with Menon and Kumar’s insisting that Indians need to concentrate on how to think about grand strategy, not simply assert it. Net assessment analysis builds in uncertainty, is highly sceptical of conventional wisdom, and rejects mirror imaging: the “if I had that problem this is how I would deal with it; therefore my adversary, who has the problem, will deal with it in the same way” fallacy. Most importantly, net assessments require lots of data, that is the nuts and bolts of how one determines military advantage or disadvantage.

Net assessment analysis as a platform for grand strategy-building has gained strong advocates and a number of skilled practitioners within India’s security planning process, initially within the Integrated Defence Staff, later at the National Security Council, advanced in no small part by Admiral Menon himself.  But it lacks a strong institutional base. This is explicable, given the deeply rooted barriers to successful grand strategy-building noted earlier.

It’s puzzling that India’s inquisitive and analytical minds, among the world’s best and most innovative at things like designing the complex algorithms powering today’s premier software or business solutions, seem distant from the equally complex calculations at the heart of building a grand strategy. This is the challenge Menon and Kumar set out to reveal. In doing so they have produced a transformative and modern “how to” classic with potentially a large global audience. But this leads to the tantalising question: will India beat its competitors in the world of grand strategy, or will the impediments against it persist to India’s disadvantage?