From oceanography to oenology, new career options are heady 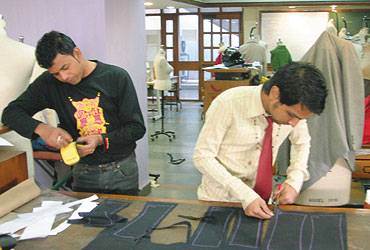 outlookindia.com
-0001-11-30T00:00:00+0553
When Gargi Sen decided to join the National Institute of Design (NID), Ahmedabad, in 1981, her parents were horrified. Designing was not thought to be an established career option. On top of that, NID those days gave a diploma, not a ‘degree’. Gargi’s parents cannot be blamed as few at that time thought beyond a career in engineering, medicine or the civil services. Designing was considered as nothing more than a pastime, creating some patterns on paper. But for Gargi, NID was a refreshing departure from the ongoing "rat race among aspirants and parents for careers in medicine and engineering".

Two decades later, the scenario has changed beyond recognition. More people today opt for careers in areas other than what were the traditional favourites. The age of alternate courses has truly kicked in. Says an advisor with a leading educational institution: "A number of students are confused these days. They are not sure about what career to go for and clearly, popular courses of medicine, engineering or finance do not interest them that much any more. A large number of today’s youngsters are technically inclined and qualify for traditional courses, but they do not want to get into these areas."

So, in a subtle shift of focus, alternate streams are becoming the new mainstream. Says Malobika Sengupta, ceo, Wigan & Leigh College: "These are industry-oriented and training-based courses as against the purely academic character of the traditional streams. With liberalisation and economic growth, new professions have come up that require specialised training and trained manpower. Also, today’s students have realised that these alternate, offbeat careers can give them a good standing in life." There’s almost a mass exodus from the straight and narrow path. Says Sushma Shastri, academic counsellor with the Amity group: "We spend a lot of time counselling students on alternate courses and careers because that is where the future prospect is."

But how do these less obvious, sometimes esoteric career options cut ice with a generation which has access to easily available and high-paying BPO/ITES jobs? Sengupta defends her turf: "Young students and graduates do go there and these are high-paying jobs, but long-term prospects are limited unless you get a professional qualification. There are also hardly any growth prospects there. On the contrary, alternate careers in fashion, media and other sunrise areas are wide open and have huge potential." 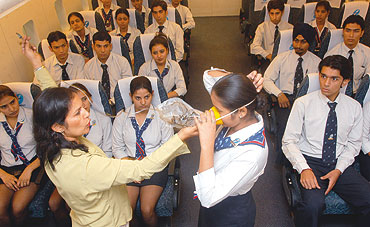 The finer details at an air-hostess training course

Among the new careers, the most popular is fashion designing. This, say experts, is because of the rising popularity of the concept of modern fashion and the rise of home-bred designers. Fashion designing courses have been popularised by organisations like the government-run National Institute of Fashion Technology (NIFT), which offers both undergraduate and post-graduate courses. Says Pavan Kaushik, coordinator with NIFT: "Fashion is one of the hottest career options for youngsters today. It is creativity, fun and a career all rolled into one. But it requires training and education with the help of the latest machinery and equipment apart from expertise from across the world. That is where top institutions like NIFT come in."

Such is the popularity of fashion courses that tens of thousands of students compete for NIFT’s 1,100-odd seats every year. Through its seven centres across the country, NIFT offers five undergraduate courses in fashion and two post-graduate programmes. It also offers over 40 part-time programmes throughout the year. Fashion designing courses are also offered by the Pearl Academy of Fashion and Wigan & Leigh College, among others. Says Sengupta: "The glamour attached to this industry is just one aspect. It is a huge industry which requires a lot of trained manpower not only in pure designing but also in other associated areas. This is what pushes it up in importance and demand."

Design is another career which is hot because of reputed institutions like NID—another government-promoted outfit. Says Sen: "NID has an incredible infrastructure and curriculum. To keep up with the changing times, it has shifted from a studio-based experimental approach to a more practical industry-led and focused mode of teaching which gels with today’s demands. It understands what the industry requires and gets students ready for that environment." Within the gamut of design, graphic designing and animation are now big because of new-generation films. The growing trend of animation outsourcing has also added to the demand for these skills. Says Debjani, who joined NID two weeks ago: "Job prospects in this line are higher than any other stream. Advertising agencies are always on the lookout for NID graduates. And these are extremely well-paid jobs. There are also channels like MTV and Channel V, which look for good design graduates for their visuals. I couldn’t say the same for traditional lines. There is an element of uncertainty there."

Also, thanks to the proliferation of TV channels and publications, mass communication and media studies is another hot pick. Says a course coordinator with an educational institution: "Nine out ten students opting for mass communication or media studies want to become TV anchors or reporters. This is because of the visual exposure they can get. Even five years ago, the preferences were different although print journalism still attracts a large number of youngsters." 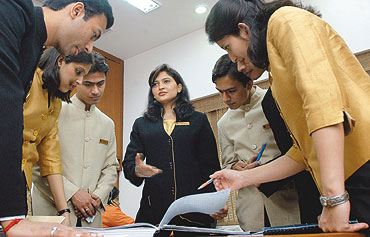 A career in hotel management, catering, tourism and hospitality are popular too. Currently, this industry employs over 2.4 million people in the country. Competition and constant growth has only increased employment prospects in this line. The National Council of Hotel Management and Catering Technology, a government-run organisation, controls most of the education and training in this sector and 24 institutes, including 19 Institutes of Hotel Management, are affiliated to it. There are other institutes run by hotel chains and private hotel management institutes with foreign affiliations, like the Oberoi Center of Learning and Development in New Delhi.

Institutions like Amity offer courses in other sunrise sectors like biotechnology, nanotechnology and absolutely niche and industry-specific courses like herbal microbial studies and fermentation technology. Says Shastri: "Although some of these areas are new and untested in India, their demand is rising. A lot of research is going on in biotechnology and nanotechnology, so we are building up our R&D facilities and infrastructure. Also, trained manpower in fermentation technology is in demand from the wine, beer, pharma and dairy sectors and there are not too many institutes to train people in these areas."

Other frontrunners in this new career race are airline industry, beauty industry, private investigation, nutrition and diet control, speech technologies, careers built around foreign language specialisations in business and tourism. And then there is a whole area which opens up under maritime studies—from oceanography to nautical science. In many of the new disciplines, the fee structure is fairly steep compared to traditional courses. The NIFT courses, for example, cost around Rs 75,000 a year on an average, while even some of the part-time courses can set you back by up to Rs 90,000. The NID course fees are also around Rs 75,000-85,000 per annum. The fee for courses at Amity is around Rs 4-4.5 lakh.

But is this trend towards offbeat careers just a metro phenomenon or are small-city students alive to it? Sengupta asserts that the trickledown effect has started and the craze for alternate careers has begun in smaller cities . "Earlier students from smaller cities came to the metros for graduation. Now they are aware of the benefits of alternate careers and are coming to do these courses," she says.

So what does the future hold for such careers? Experts believe that although traditional careers will continue to pull students, the big shift to alternate careers has certainly begun. Says a Delhi-based placement consultant: "Less than a decade ago, the only careers one looked at was in IT, engineering or the government. The telecom revolution changed the parameters and the paradigm. We’re in for another shift." Millions of young career aspirants would cheer that.

Hitting The Nadir During Krishna's Tenure And After...