With lesser numbers of their own joining the profession, Indian teachers are in demand in the US 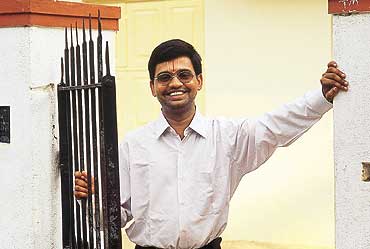 outlookindia.com
-0001-11-30T00:00:00+0553
ON her first day at work in an American school, Shigy Joe, hailing from Delhi, decided to observe a high school class in session before she actually began teaching one. Sitting inconspicuously at the back of the classroom, the 27-year-old couldn't help but notice a male student staring at her. Pulled up for doing so, the boy simply blurted out: "I'm looking at her because I've fallen in love with her."

Once the initial shock had worn off, Shigy was in for another surprise. The boy, she was told, was mentally retarded, the only such student in an otherwise average class of maths students. His inclusion in the class was owing to his special skills in algebra. "It's amazing," says Shigy, who has since befriended the student. "In India, we don't treat these kids as normal and lavish 'special' attention on them."

Coming as it did only a week after her arrival at Chester High School, in Chester, Pennsylvania, the experience set a decisive tone for the young teacher: here was an opportunity to interact with small classes, employing the latest technology and innovative teaching ideas. Even if it meant regularly suffering the indignity of students laughing at her accent and awkward choice of words.

Like hundreds of other Indian educators, Shigy had responded to the call of schools across America, many of which are understaffed and desperate for qualified talent. Teaching in schools is the new employment avenue for those Indians wishing to wing their way to the US.

Michael Vanjani, founder of the New York-based Teachers Placement Group (tpg), says a host of factors are driving school districts (an administrative unit comprising many primary and secondary schools) to recruit Indian teachers. Their knowledge of subjects—especially maths and the sciences—as well as the schools' interest in enhancing their cultural diversity make them strong candidates. Says Vanjani: "American educators feel international teachers need to teach a lot of their schools so that they can learn about the world, not just America."

But the larger reason is that the indigenous talent pool has shrunk rapidly and the American educational system perforce must look elsewhere. Says Jamie Horwitz, a spokesman for the American Federation of Teachers (aft), Washington: "With the economy doing well, there are a lot of alternatives for people besides teaching." In addition, says he, America's push to reduce the size of classrooms has ballooned demand for instructors, a problem compounded by the fact that a large number of them have been asked to take early retirement to ease the pressure on an over-funded pension plan. (Since money withdrawn is in excess of the funds injected into teachers' pension or provident fund, teachers are asked to retire early to balance the account.)

One can't put a figure to the number of teachers migrating to the US. But the number is large, and growing. For instance, the tpg, founded in 1999, expects to place 170 foreign teachers by this year-end, catering largely to the New York area; most of them Indians. Another recruiting firm, Visiting International Faculty, Chapel Hill, North Carolina, placed 1,300 teachers from 35 countries. Other Indian teachers have been recruited after they responded to advertisements.

The school districts are reluctant to divulge exact statistics. Says Thomas J. Jennings, associate dean for Teacher Education at Teachers College, Columbia University: "It's information districts don't want to give out as it demonstrates their inability to find certified teachers." What is certain is that the teachers' phenomenon doesn't yet match the invasion of software programmers that permanently altered the American landscape. Nor are visas as easy to come by as Simmi Chhabra discovered after she had applied to a Texas school.

Nonetheless, the rising level of teacher immigration has stirred talk among union members even though the aft's official stance is one of guarded acceptance. "We have mixed feelings," says Horwitz. "There is a severe teacher shortage, and it's growing worse. Teachers from overseas have a lot of potential. In theory, that's fine. Only, we question whether exceptions should be made for overseas teachers. If standards are being met, we welcome them. If people know their material, that's great. We hope those who come from overseas stay."

Staying on, though, is something Indian teachers are unsure about. For one, the salary is not particularly high—most earn between $22,000 and $32,000 a year when they start out. Jennings feels some teachers find their initial euphoria vanishing once they spend time in the US, particularly in the more expensive areas. "A salary of, let's say, $35,000, looks good compared to what you get at home," he says. "Then you find the cost of living in New York is high. And what you envision doesn't exist."

But for teachers like Vidya Madadi, the salary is one of the attractive aspects of the job. On arriving at the Northeast Middle School in Elkton, Maryland, she drew $32,000 annually. After completing her first year of work, she received a 10 per cent hike, a stark contrast to the measly Rs 4,000 a month she was being paid as salary at the St Anne's school in Hyderabad, that too after a 10-year experience of teaching in Indian schools.

"You can really earn a good living," says the 31-year-old maths teacher who came to the US after responding to an ad in an Indian daily. "There were hundreds of people the first day I went for the interview," says Madadi. "I thought I wouldn't get it." The second day, she impressed the recruiters. A video conference with the school officials in Maryland, and the arrangement was finalised. Chennai's Giridhar Reddivari faced an equally lengthy selection process, but is now ecstatic about earning a $35,000 salary a year.

The recruitment over, dealing with unruly students is the next hardest bit. American students are notoriously unruly as Madadi has discovered. "I get a lot of attitude," she says. "They don't respect you as an adult. They think they know everything." One of her students, 13-year-old Christopher Murdock, says: "They tell her she should go back to where she came from and that she can't speak English. They are really just mean." His mother, Alice, finds fault with the small-town bigotry that is endemic to the area. At a recent gathering of students, teachers and parents, she watched one student harass Madadi, while his mother and father sat quietly by. "I finally spoke up and said, 'Why are you doing this? You are privileged to be learning from her'," says Alice. "His parents said, 'He don't need to have no Indian teaching him'."

Racism though is not a norm, but the relatively low priority education has in American culture is unsettling. Says Jemima Tadikonda, who came from Visakhapatnam to teach in Elkton, Maryland: "It's the parental upbringing and their concerns which I don't see in most of the students. The kids say 'I want a car, I have to buy my car insurance'. They're more interested in saving for a car."

The aft, too, is aware of the low morale within its ranks. Even with small classes, the newest computers and the fastest Internet connections, teachers can only do so much with unmotivated pupils. The organisation is campaigning on a Triple-R platform, to restore Respect, Responsibility and Results to the American classroom. Two policies being pushed for are a 'time-out room' for unruly students and a zero-tolerance standard for violence and foul language in the classroom.

"There have to be strict and enforceable standards in schools," says Horwitz. "If we had policies like that, we probably wouldn't have had such teacher shortage. Certainly, we'd be a much larger organisation were we the American Federation of Ex-Teachers." Till these policies are enforced, foreign teachers will have to rough it out. Applicants: Proceed with caution.

A Long Way From Serendip