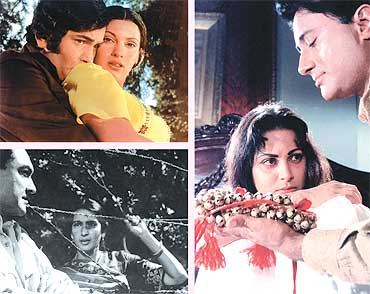 outlookindia.com
-0001-11-30T00:00:00+0553
Madhubala, as Anarkali in Mughal-E-Azam (1960)
Elevated from frothy comedienne to tragic heroine in one film, Madhubala is beautiful and intense in her defiance of emperor Akbar and love for Prince Salim.

Nutan, as Kalyani in Bandini (1963)
Quiet and serene, Kalyani kills for Bikash, the only man she has ever loved, and accepts the consequences with rare grace and dignity.

Waheeda Rahman, as Rosie in Guide (1965)
Her extramarital love affair with Raju Guide liberates her from a claustrophobic life and rekindles her passion for dance.

Meena Kumari, as Sahibjaan in Pakeezah (1971)
The innocent courtesan with limpid eyes and quivering voice is saved from a life of ignominy by the man she loves—the stuff of high poetry.

Dimple Kapadia, in and as Bobby (1973)
Set a new fashion trend with her frocks, ushered in the era of teenage romance and became the nation's darling.

Sridevi, in and as Chandni (1989)
Sridevi was the perfect object of male desire in this love triangle, passive but passionate, a pretty picture in white chiffons, prettier when rain-drenched.

Kajol, as Simran in DDLJ (1995)
Western-educated but traditionally brought up in the heart of UK. Non-threatening 'good girl', loved both by NRIs and those 'back home'.

Kareena Kapoor, as Geet in Jab We Met (2007)
It takes an entire film for the effervescent, flamboyant Sikhni to realise she's chasing the wrong man. Won over audiences with her chatterbox charm.

Love, See Us Into A Hall Of Mirrors