An 'externally flexible' Pakistan and Musharraf weather the jehadi storm, emerging the better for it 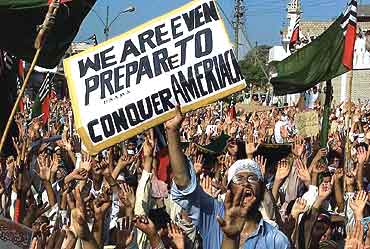 outlookindia.com
-0001-11-30T00:00:00+0553
When out of a clear blue sky disaster struck New York, the tremors were felt throughout the world but nowhere more intensely than in remote Pakistan. So removed from the epicentre of this cataclysm and yet, in so many ways, so near. The reason was simple. Pakistan stood in the direct line of fire. Scarcely had the shock waves subsided than the White House and the Pentagon were pointing the finger of blame at the shadowy figure of Osama bin Laden. Where was bin Laden’s refuge? Afghanistan. Who was giving him protection? The Taliban rulers of Afghanistan. Which country was the principal prop of the Taliban? Pakistan. The line of fire was direct and so was the presumed trail of responsibility.

It needed no extraordinary clairvoyance to see that if Pakistan was to escape or deflect American wrath it had to act quickly. The US wanted blood. It needed a visible target to hit. It needed to assuage a quickly rising sense of vengeance. President George Bush had to be seen to be acting as the Commander-in-Chief.

President Pervez Musharraf’s reflexes were quick. He appeared on television to denounce the attacks on the US. It has become fashionable to say that he succumbed to American pressure and aligned himself with them. The truth is not as simple or as crude as this. It was the position he publicly took which set the stage for US secretary of state Colin Powell’s famous telephone call some time later.

Powell wanted to know where Pakistan stood—"with us or against us?" This was the stark vocabulary of the Bush administration, to friend and foe alike. But Musharraf’s inner coterie which met in Chaklala, where the joint staff headquarters is located, had already decided. They would go all the way with the US. Powell, therefore, needed recourse to neither threat nor persuasion. He was talking to someone already converted. One, moreover, his own master and not under the necessity of consulting a wider circle of opinion. Whatever its verbal commitment to democracy overseas, the US has always liked dealing with dictators in a crisis.

But a closed shop also has its limitations. In the first rush of enthusiasm, Pakistan promised everything to the Americans. Any talk of quid pro quos was left vague, out of the curious belief that nations should behave like gentlemen and not put too obvious a price on their support to a friend in distress. From this has flowed Pakistan’s remarkable talent to undersell its services.

But other considerations were at work as well. What was India up to? India too had been quick off the mark, the mood in official Delhi best captured by novelist Arundhati Roy when she said India was "furiously gyrating its hips" to catch US attention. For India, it was a dream coming true: Pakistan caught in an Indo-US nutcracker. But it was a dream which quickly turned sour when Pakistan—for obvious geographical reasons India could do nothing about—was considered more vital for any assault on Afghanistan. As India felt miffed, Pakistan rejoiced in an outcome hailed as a tribute to the suppleness of the military mind.

A sombre-faced Musharraf appeared on television to explain why Pakistan was siding with the US. But joining the American coalition had wider consequences. It meant taking a U-turn on a cherished policy whose fallacies had held a tight grip on the official mind for close to a quarter of a century. A friendly regime in Kabul gave Pakistan ‘strategic depth’ and thwarted Indian designs of sandwiching Pakistan between two hostile powers. Pakistan therefore gave a fresh twist to the Great Game that the British and Russian empires had played in Afghanistan and Central Asia when they battled for influence in the 19th century. It propped up now one faction, now another, ultimately ending up with the Taliban. Pakistan was so wedded to the concept of strategic depth that it kept supporting the Taliban, and injuring its own reputation in the process, even when the rest of the world had given up on them.But this policy held sacrosanct for so long had to be discarded in a trice after September 11. If this was a tribute to the sharp footwork of Pakistan’s military rulers, it also called into question their earlier wisdom. All the same, the turnaround on Afghanistan, even if externally induced, was a blessing for Pakistan. There was no other way to get rid of the Taliban albatross round the country’s neck.

But this external change was also full of internal ramifications. Pakistan’s involvement in Afghanistan in the Eighties had created an alliance between the army and the religious parties. The ‘jehadi’ culture which came to colour, if not wholly dominate, official thinking in Islamabad was forged in the killing fields of Afghanistan. It rested upon a multifarious coalition ranging from the cia and Saudi intelligence at one end to Pakistan’s isi and Arab volunteers at the other. When the Soviet army finally pulled out of Afghanistan, it left a burning crucible behind from which in time arose the bin Laden phenomenon.

For a brief moment post-September 11, Islamabad became the second busiest capital in the world after Washington, the destination of first priority for prime ministers and foreign ministers from across the globe. Visibly elated, President Musharraf basked in the warmth of this attention, the earlier isolation of his regime standing in sharp contrast to all these comings and goings.

Pakistan too seemed to have made it. Money was not exactly flowing in but debt rescheduling and a $600 million grant from the US eased its immediate economic problems. In any case, the mood in Islamabad was optimistic, with officials saying the alliance now forged with Washington rested on enduring foundations and would not repeat the earlier cycle of being used and then abandoned.

There was, however, a contradiction which lay at the heart of Pakistan’s change of course in Afghanistan. This now came to the fore. How could anything that was unacceptable in Afghanistan be acceptable in Kashmir? Pakistan’s leaders hadn’t thought this one through. When they threw their country’s lot with the US they had thought that, among other great things, they had put India in its place. In the new international climate, however, no one had any patience for the word ‘jehad’ or for any painstaking distinctions between terrorism and a genuine freedom struggle. Israel pounced on this opportunity and unleashed a new round of repression against the Palestinians. India too seized the opportunity but in different fashion.

When a group of Kashmiri gunmen attacked the Indian Parliament in December last year, India went on a diplomatic offensive, charging Pakistan with the flavour of the moment, "cross-border terrorism". For good measure, it put troops on a war footing, raising worldwide fears of an armed conflict between two nuclear states.

To Pakistan’s chagrin, the US, instead of admonishing India, sided with it and brought pressure to bear on Pakistan to take urgent steps to allay Indian concerns. This, after Pakistan’s vital services to the US in its Afghan war. This, at a time when the Pakistan army was helping catch Al Qaeda elements fleeing Afghanistan.

To ward off the pressure, President Musharraf delivered his much-awaited January 12 speech, vowing to rid Pakistan of religious extremism. In coded language, he also made it clear that Pakistan was ending support to ‘jehadi’ elements in Kashmir. The speech was widely welcomed, even by India initially. But New Delhi returned to the diplomatic offensive, backed up by war-like noises, when Kashmiri militants struck the Kaluchak army camp outside Jammu in May. Once again the spectre of N-conflict hovered over the subcontinent.

Forgotten in this frenzy were two possible causes for the hard line India was taking. First, the Uttar Pradesh elections in February which put a premium on war-talk and belligerence as vote-catching devices. Secondly, the genocide of Muslims in Gujarat after which came the second phase of India’s tough talk and posturing against Pakistan.

But Pakistan was batting on a weak wicket and, once again, when the US administration swung into action it was Pakistan which came under pressure. From Islamabad, the US deputy secretary of state, Richard Armitage, carried the assurance to Delhi that Pakistan would end all kinds of support to Kashmiri militants.

India is yet to give a clean bill of health to Pakistan in this regard but it is clear, or should be to doubting Thomases, that the sea-change in Afghanistan has been followed by another in Kashmir. A 20-year-old saga with jehad as its central theme has ended. Few people in Pakistan have any doubts on this score.

What are Musharraf’s prospects then? He faces a jehadi backlash which has taken the form of some high-profile bombings in recent months. But he faces no widespread unrest, and this is due to two simple and inter-related reasons: the extremist organisations lack a popular base and represent a fringe element in Pakistani society; and, furthermore, most Pakistanis are suffering from jehadi fatigue. Not that they were accessories to anything. But since successive governments were committed to a certain course of action, the people of Pakistan had to put up with the ensuing rhetoric.

Replacing the messianism of the past is a feeling that it’s time to concentrate on the internal front, on the many problems which afflict Pakistan (many of which are common to the subcontinent even if India with its modernist pretensions is averse to admitting this).

Paradoxically, far from weakening Musharraf, the U-turns on Afghanistan and Kashmir have strengthened him. He may face a jehadi backlash but given its narrow base this is bound to peter out in time. And he does enjoy the West’s solid, if at times carping, support.

For external flexibility (the new name for U-turns), Pakistan’s military ruler has exchanged internal rigidity. The political gameplan unfolding in Pakistan is taking place much on his terms. In the new set-up emerging from the October elections, he will remain the commanding figure, Pakistan’s president, army chief and head of the new National Security Council, all rolled into one. Faustian bargain, did someone say? From his perch, it doesn’t look a bad exchange.

(Ayaz Amir is a columnist for The Dawn newspaper)

'Religion Is The Most Important Element In Defining A Civilisation'