Now militants decide what to wear and how to look, and prescribe a dress code to adhere to 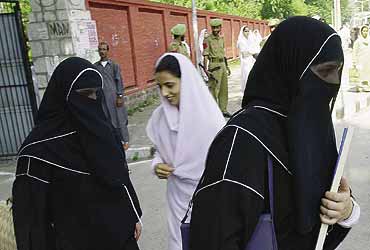 outlookindia.com
-0001-11-30T00:00:00+0553
It began last year with unidentified persons knocking on doors in downtown Srinagar in the dead of the night and then making a hasty exit. It continued early this year with beauty parlours near Lal Chowk coming under attack as they were deemed "unIslamic". Then came a shocking act: two teenagers were shot in the heart of the city because they wore denim jeans. But the most gruesome incident occurred last fortnight when activists of the little-known militant group Lashkar-e-Jabbar flung diluted sulphuric acid last fortnight on two schoolteachers in Khanyar for not wearing burqas. The group also specifies a dress code for the menfolk—sport beards and wear salwar-kameez.

Strangely enough, all the major militant outfits in the Valley, including the Lashkar-e-Toiba (LeT), the Jamait-ul-Mujahideen (jum) and the Harkat-ul-Mujahideen (hum) have disassociated themselves from the campaign and denounced this act. "Whoever this group is, it is bringing a bad name to Islam," Abu Osama of the LeT told Outlook. Jameel Ahmad of the jum was even stronger. "You can't attack innocents. I've never heard of this group." Mirwaiz Umer Farooq was also unsparing in his criticism of the acid attack. Addressing his Friday congregation, he lashed out at those who claimed to be the protectors of Islam. "Somehow, I get a feeling that this is being done by some miscreants who want to create a divide between the mujahideen and people."

Not willing to take a chance however, most students and womenfolk have fallen in line and have begun donning 'burqas' and 'abayas'. Opportunistic shopkeepers have even upped the prices of readymade burqas and black silk cloth while local imams in Srinagar have taken advantage of the situation to join the campaign and exhort people during Friday namaaz to observe the decree and "curb the rising immorality" among Muslims.

But though they might follow the dress code, few support it. Says Sakina Yatoo, the lone woman minister in the Farooq Abdullah cabinet: "This is not what Islam preaches. I condemn this. Why didn't these people look at what Pervez Musharraf's wife, Sehba, wore when she came to Agra?" Adds Mehbooba Mufti of the Peoples' Democratic Party: "We don't need someone to tell us what to do. This is not going to work."

The police seem clueless about the incident, as they have been of previous acts. "These are miscreants. We do not know who they are," says a senior police officer. In a land where the right hand doesn't know what the left's doing, the mystery can only deepen.