A win over Pakistan and a bagful of medals. Could it be India's best-ever outing in the games? 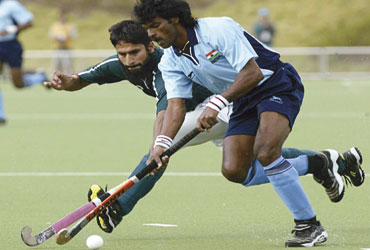 It was hard to miss the exuberance in the Indian contingent at the Asian Games in Busan, South Korea. Indian athletes were in constant touch with the hockey team on Thursday, the day the defending champions were clashing with arch-rivals Pakistan. Tirkey's boys, in turn, kept regular tabs on the athletes. In the end, the news from both the stadia was heartwarming. While India was celebrating its most productive day in athletics, with three golds and one silver, the hockey team allowed Pakistan to equalise three times before taking a decisive 4-3 lead in a high-tension match marked by four yellow cards and one red card.

The show in Busan is not over as yet, but indications are that it could be India's best ever outing. Ironically, it's happened in South Korea, where 16 years ago India had a disastrous campaign—more than 400 athletes and officials brought home just five golds, four of them through the efforts of P.T. Usha, prompting the then prime minister, Rajiv Gandhi, to remark: "If only Usha can win gold medals, why send more than 400 athletes to each Games?"

There are no such complaints this year. At the time of going to the press, India had already mopped up nine golds, six of them from athletics, besides one each in golf from the US-based amateur Shiv Kapur, snooker and kabaddi. The booty had already catapulted India to the sixth spot on the medals table and with some more medals expected, India could easily land up among the top five.

After a disastrous opening week in which India managed one gold and little else, the revival in the second week has been excellent. This was led by the gritty athletics contingent, often accused of promising the world and then falling short of expectations. But by Thursday, the 50-odd-strong athletics squad had fetched India six golds, four silvers and two bronzes—two-thirds of the gold and almost half...