Is it time for an age-limit for umpires? Bucknor's history of gaffes with India would suggest so. 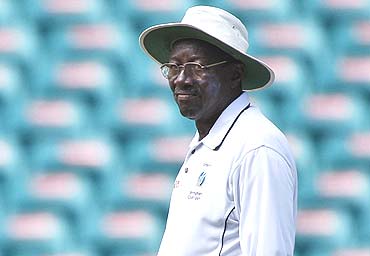 outlookindia.com
-0001-11-30T00:00:00+0553
West Indian umpire Steve Bucknor, 61, earned infamy much before Sydney ’08, especially among Indian cricket fans. Known as Mr Slow Death for the protracted, tantalising manner in which he raises his finger, Bucknor is a man with a past of terrible slips against India. And Indian cricketers find a pattern in this, thus the outcry and the unprecedented banishment after Sydney.

Bucknor’s first run-in with India happened in 1992-93, when he refused to refer a run-out decision against South African Jonty Rhodes to the third umpire. On India’s 2003-04 tour of Australia, the tourists were again unhappy with Bucknor—Tendulkar got a shocking lbw decision at Brisbane and Australians got lucky on several occasions.

It wasn’t merely the shocking decisions that riled the Indians—it was the manner in which he conducted the game, and himself. "Sure, players make mistakes, umpires make mistakes," says an Indian player who saw Bucknor in action from close quarters on the 2003-04 tour of Australia. "But while many other umpires apologise for their errors, Bucknor seems to take a sense of pride in giving batsmen out."

"Tendulkar got the worst of it, and then there were so many decisions that should have gone against Australia—Justin Langer, Damien Martyn, Steve Waugh," he said, not willing to be named, understandably. "Bucknor seems proud, even arrogant on the field. I think he’s lost the respect of players over the last few years. There’ve been so many instances against us, one can’t help but suspect there’s a bias, some grudge against India."

There are suggestions that Bucknor, the seniormost international umpire today having officiated in 120 Tests and 167 ODIs, is way past his prime. Incidentally, he was one of the umpires at the 2007 World Cup final farce, when the match ended in semi-darkness after he and Aleem Dar misinterpreted the rules.

Interestingly, Bucknor was an international football referee before the game’s governing body, FIFA, lowered the age limit of referees to 45. Maybe, something similar needs to be done in cricket as well.

Dickie Bird, the legendary English umpire, suggested that Bucknor should go on his own. "I have said to Steve, ‘Don’t go on too long, get out while you are still respected.’ I think he has gone on too long," Bird said.

Bucknor, actually, is due to retire in May 2011. The Indians would be hoping the big Jamaican will take Bird’s advice and take flight on his own.

Plain Bhajji On The Pitch