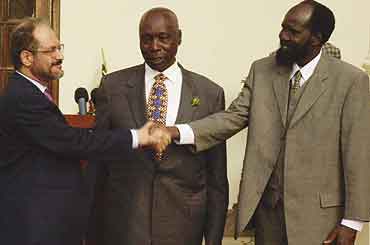 outlookindia.com
-0001-11-30T00:00:00+0553
War and peace in Africa rarely have their echo in India. But last week’s peace agreement between the Islamic government of Sudan and the rebel Sudan People’s Liberation Army (SPLA) should at least have the managers of the Oil and Natural Gas Corporation (ONGC) smiling. Its decision to invest a whopping $750 million in the Greater Nile Petroleum Operating Company, Sudan, had pessimists pointing to the 19-year-old bloody civil war to raise grave doubts about the ONGC’s business sense.

But now there’s a glimmer of hope for Sudan, and those who have interests in its nascent but rich oil reserves. Signed in Nairobi before Kenyan president Daniel Arop Moi, the agreement addresses the two contentious issues—religious freedom and right to self-determination—which had goaded the SPLA to take to arms 19 years back. The agreement now promises religious freedom to all, limits the application of sharia to the North, and commits the country to creating a pluralistic society. It also proposes a six-year transitional arrangement for a sharing of power and oil revenues between the rebels and the government. Then will follow a referendum to decide whether the southerners want to secede.

There are some hitches, though. For one, the two sides meet next month to decide on a ceasefire. Without that the accord could be useless. But post-9/11, the government wants to eschew religious extremism, and the SPLAs feel the government could utilise oil revenues to arm itself to complete superiority.