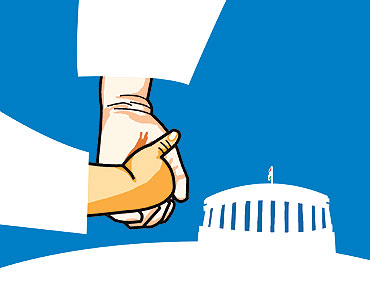 outlookindia.com
-0001-11-30T00:00:00+0553
Last night, my friends and I drank a toast to the late Benazir Bhutto. Some ten years ago in London, Ms Bhutto had asked me why I was returning to India after working abroad for so many years. Jokingly, I told her it was because my husband, then a London university professor, was thinking of going into politics. It was quite telling how, without missing a beat, Benazir responded to my comment: "Is he from a political family?"

At that time, I still believed that, while being from a political family was a definite leg-up into mainstream politics in India, it wasn't the only route. There were enough people in Parliament who had not inherited politics as the family trade. But after the swearing-in of the new MPs, Benazir's words kept sounding in my head. Never more so than when Agatha Sangma appeared to stumble over the phrasing of the secrecy oath. The audience, comprising her father's current and former friends and colleagues, looked on indulgently. When she finished, they clapped. The anxious faces, the relieved applause—it was like friends and family watching a four-year-old stumble over the lines of a nursery rhyme at her first school performance. Sweet? Scary.

A process signalling the inter-generational consolidation of power that began in the last Parliament has crystallised in this one. So many sons and daughters now happen to occupy the serried rows of the Lok Sabha that you have to search among them for the few who haven't ever had a relative in Parliament, a legislative assembly or a senior party post. In such a world, Benazir's words appear banal. But the fact is it is now harder for people without a family connection in politics to imagine that they can ever expect to participate in the political process as anything other than invisible party functionaries.

More worrying is the intellectual argument that is increasingly offered to justify this trend—that the popular mandate should erase our discomfort with it. But the popular vote is only one element of a functional electoral democracy. Another, equally important one (in our case, perhaps, the more important one) is the matter of intra-party democracy. With the exception of the Communists, most political parties in India have abandoned all pretence of internal democracy. They have readily turned themselves into family shops or conglomerates of clans.

Rahul Gandhi, to the bemusement of the capital's media and political class, has given up any claim to an office of state to pursue the more ambitious agenda of party reform. Reinventing a political party, especially one like the Congress, which has been damaged so badly and for so long, is rather harder than running a ministry—or even two. How far he will succeed is anybody's guess, but surely he cannot be faulted for wanting to change a system that put him where he is. Sadly, no one in any of the other political parties has shown an urge to go the same route.

So, instead of political parties that test ideas through discussion and debate, and choose their leaders through internal elections, we have parties that are run through patronage, lobbying, manipulation and conjuring consensus. Those who manage to get their names on the ballot paper are usually the ones who work this system best; those who have learnt the fine art of political survival at the feet of their parents have a natural advantage. In such circumstances, the popular vote is only the final scene of a grand theatrical spectacle in which the more things appear to change the more they remain the same.

Some months ago, I caught up with an old college mate who came from a political family. I asked her why she was not in politics. Her response: "I may have the lineage, but I don't have the money." And there's the rub. The background noise to the joint family sagas in this election was the rustle of cash. There was so much of it and it was spread so well through the media that no one bothered to focus on the detail. And now we have another of those lists beloved of the media—'India's 100 richest MPs'. Well, seven of the top ten are from political families. Many of these political families (and no doubt there are many more down the list) are also business families. The question arises, apart from representing their voters, whose interests do our MPs and political parties represent? Surely, the memory of a Union telecom minister whose family also owned one of the largest cable TV networks in the country has not already faded?

This, like the absence of intra-party democracy and the concentration of power with a few dozen political families, is a problem that will not easily go away.

(The writer is an independent journalist and researcher.)