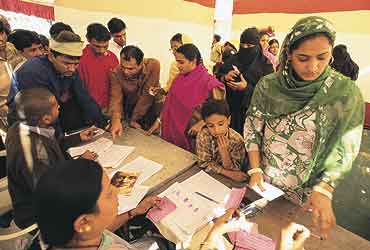 outlookindia.com
-0001-11-30T00:00:00+0553
Do political parties find women more attractive as voters than as legislators? So it would seem were one to go by the gender-loaded agendas being drafted by both the BJP and the Congress. Contrast this with the Women's Reservation Bill (providing a 33 per cent quota for women in legislatures) which languishes for lack of political "consensus". But as polls near, both parties are focusing on women's concerns in their campaign strategies and going beyond hackneyed lip-service to mahila sashaktikaran (women's empowerment).

The "mahila factor" acquired a whole new meaning after the December 2003 assembly elections in which a massive turnout of women voters was believed to have influenced the poll results in favour of two women chief ministerial nominees. Rajasthan saw a dramatic 6 per cent increase in the turnout of women voters. More women than men voted in 31 constituencies, most of them located in tribal areas and pockets of high literacy, helping Vasundhararaje to the top job in the state. In Madhya Pradesh, the percentage of women voters increased by 10 per cent—from 51 to 61 per cent—contributing to Uma Bharati's landslide victory.

That the mahila vote has a mind of its own has been confirmed by the inhouse surveys conducted by both parties. The Congress found it had a 35 per cent votebase among women all over the country except Andhra Pradesh, where TDP ruled women's minds. This is attributed to two factors: the Rs 2 per kilo rice scheme, and prohibition. The former sop was sustained for 12 years and left a deep impression on Andhra's women voters. The latter has been repealed and the Congress hopes this might go against the Chandrababu Naidu government. The BJP survey, conversely, says women voters have a marked preference for Atal Behari Vajpayee, even though he is pitted against a woman: Congress president Sonia Gandhi.

"Women as a constituency are top of the mind for us. The Congress president is very conscious of the need to separately address women's concerns," says Congress Working Committee (CWC) member Ambika Soni. The party manifesto focuses on women and youth rather than caste and community, a fact that created consternation in the CWC when it met to discuss the manifesto last fortnight. Two members pointed out that the concerns of minorities and Dalits appeared to have been subsumed by the concern for women. The Congress president reportedly responded by saying that women were the most disadvantaged among minorities and Dalits.

Interestingly, much of the Congress focus appears to be on targeting women workers in the unorganised sector through self-help groups (SHGs). There are nine lakh SHGs across the country, two-thirds of them in the four southern states of Tamil Nadu, Kerala, Andhra and Karnataka. With 1.4 crore members, they have a multiplier effect that is said to allow them to influence five times as many voters. One of the proposals in the Congress manifesto is directly aimed at SHGs—hiking the level of micro-finance available to them from Rs 1,000 crore to Rs 5,000 crore.

The other proposed initiatives are: handing over of fair price shops to women's cooperatives, the joint registration of pattas (property deeds) in the name of husband and wife, compulsory registration of all marriages and focus on girl children between 6 and 14 years. From female foeticide to the minimum age of marriage, the Congress hasn't missed a single gender-sensitive trick. "It's not just at the level of policy formulation. We're also reaching out to women's groups in the field," says aicc secretary Tom Vadakkan.

The BJP's gender focus is much along the same lines but more generalised: making access to credit easier, encouraging women entrepreneurs, giving the NGO sector a leg-up and so on. Says BJP backroom strategist Sudhanshu Mittal, who scripted the BJP's success in Rajasthan: "We consciously targeted women—the mobilisation of the woman voter turned the tide in our favour.Political parties' perception of women voters as a mere addendum to men has had to change. They are now a constituency unto themselves. While strategising, you can't afford to ignore this politically dynamic segment." To this end, the BJP is using women's organisations in the rss to reach out to voters.

Given the fact that the BJP's vision document is being drafted by Arun Jaitley, it's hardly surprising that there's a focus on the legislative route. "All gender-discriminatory laws must comply with constitutional guarantees. We're the only party to have said and implemented that. We are ready to address all discriminatory laws. The Congress can't do that because it plays up to fundamentalists," says the Union law minister.

Both parties accuse each other of not supporting the Women's Reservation Bill in real terms. Jaitley says the Congress supports the legislation, but allows its allies to scuttle it. The Congress wants to know why the bill, like POTA, could not be passed by a joint session of Parliament. The question neither is willing to address is why with so much focus on women have they not been able to set aside one-third of tickets for them.