A very involving, entertaining if "manipulative", "slanted" and at times sentimental documentary. 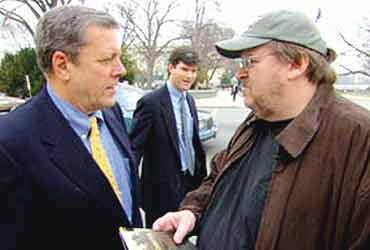 How can Fahrenheit 9/11, the most controversial film (unofficially) of 2004, not be on anyone's must-see list? After calling Bush a "fictitious President" at the Oscar acceptance speech, Moore takes on Bush and his policies with absolutely no holds barred. Result: a very involving, entertaining if "manipulative", "slanted" and at times sentimental documentary.

You'd love or hate this film depending on your political allegiance but can't remain indifferent to its audacity. A vitriolic critique of the Bush administration in post-9/11 America and the uneasy linkages with the Saudis. That 15 of the 19 responsible for the catastrophe were Saudis, that Saudi money is supposed to have funded Al Qaeda and yet no probe was conducted into these crucial aspects. All this may not be something Americans didn't know of, Moore may not have unearthed great new facts here but it's the way he puts across issues that works. He is quirky, pugnacious, provocative and hence very watchable.