Congress goes pro-poor in its last leg, but BJP is rich in snubbing the ruling party ahead of state elections 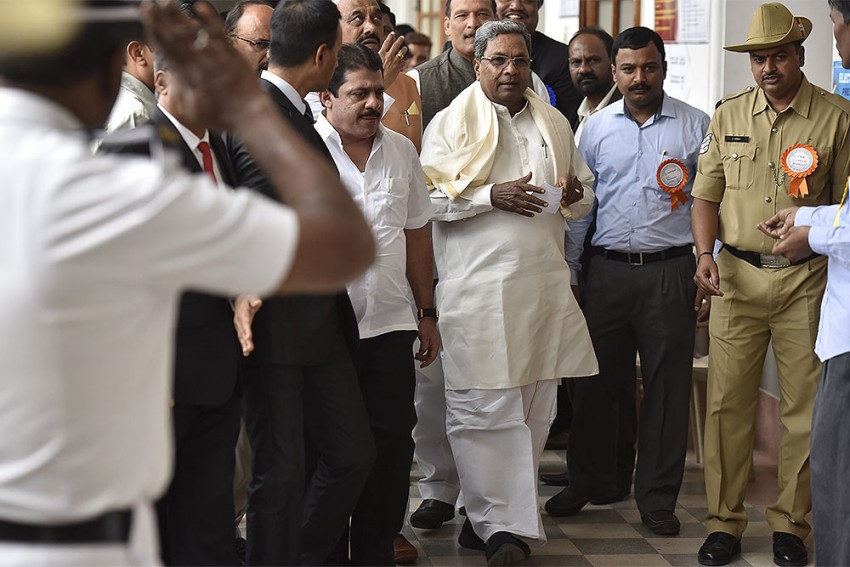 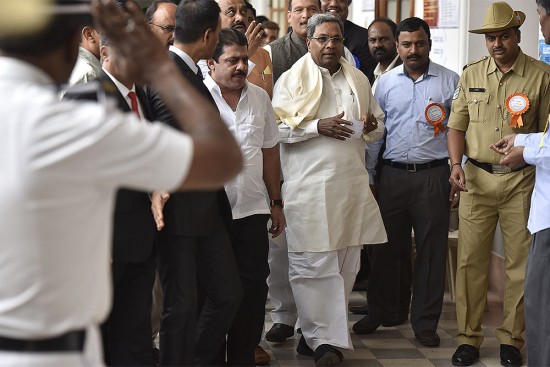 At a recent public meeting in a northern Karnataka town, Siddaramaiah noted with pride that he was going to be the state’s first chief minister in about 40 years to complete full five years in office. Why the distinction is a bit of a Karnataka oddity.

Perhaps you couldn’t begrudge him some indulgence, one might argue, considering that Siddaramaiah’s first couple of years in office did appear shaky with the rumbling among Congressmen about an ‘outsider’ at the wheel. At the mom­ent, however, he’s the face of the party as it girds up for a state election, one that has become all the more crucial after the defeat in Gujarat last week. Barring Punjab, Karnataka is the only other large state the Congress controls. But it’s also the only southern state where the BJP has tasted power. The gloves are off now.

The Siddaramaiah government would like to believe that it doesn’t face much anti-incumbency. It is banking on a str­ing of populist schemes—many with the suffix ‘bhagya’ (good fortune)—that have been the centrepiece of its pro-poor image. They have been top priority for Siddaramaiah, 69, who began rollout just hours after he was sworn in as CM in May 2013 following a resounding victory in the polls. That was Anna Bhagya, a rice distribution scheme about which government figures claim that over 1 crore poor families benefit. Among the latest additions to the list is the ‘Indira Cant­een’—modelled on late CM J. Jaya­lalitha’s ‘Amma’ canteens in her Tamil Nadu—that serves meals at Rs 10. Political observers generally reckon the welfare schemes have reached poor famil­ies, but some feel it’s tough to gauge their imp­act on the elections. Rivals are critical, chiefly the BJP’s Karnataka president B.S. Yeddyurappa, who accuses the CM of claiming credit for central schemes.

The BJP’s showpiece is Prime Minister Narendra Modi’s government. The party’s national president Amit Shah set the ball rolling a few months ago, saying the Modi government’s pace over the past three years had seen a new scheme being launched every 15 days, but Karnataka didn’t have cause to celebrate because nothing seemed to be reaching the people. That set the tone for the BJP’s campaign with the accusation that the Siddaramaiah government had “broken all records in corruption”. The BJP’s state leaders—currently on a Parivar­thana Yatra—are reeling out figures to show how the funds coming in for urban development or railways were far higher than what the UPA apportioned to the state.

Political commentator Sandeep Shastri says the Congress has the strategy of local leadership. “Clearly Siddaramaiah is calling the shots. On the other hand you have Brand Modi.”

Siddarammaiah, too, is pulling out statistics to shore up his track record, chie­fly in irrigation. But, he also manages to get the BJP worked up with his derisive take on the ‘Acchhe Din’ promise and how the Centre couldn’t follow up with a farm-loan waiver for drought-hit Karnataka when he exempted repay of loans from state-controlled cooperative banks. His own catch-phrase as he gears up for elections is ‘Delivered as Promised’. Political observers reckon he has stolen a march on rivals with some tactical positions.

The ruling party is upbeat. “We have beaten Gujarat in invest­ment intentions (received); Karnataka is number one today in the country,” says Dinesh Gundu Rao, working president of the Pradesh Congress Comm­ittee. “Our unemployment rate is lowest now compared to all the BJP-ruled states. In terms of industrial development, we are higher.”

The saffron party makes no bones about the ‘minority appeasement’ accu­sation, most visible, they point out, in Siddaramaiah’s move to celebrate 18th-century Mysore king Tipu Sultan’s birth anniversary as a state event. The party is also pointing to the murders of Sangh Parivar activists in the state over the past couple of years. Stepping up the pressure, the BJP has been after some of Siddaramaiah’s ministers, calling for the resignations of two particularly ‘tain­ted’ ministers D.K. Shivakumar and K.J. George. Observers, though, note it took a prodding from Amit Shah to get a fractious party unit in Karnataka to go on the offensive against the Congress.

Just as the BJP frequently brings up the UPA-era scams, Siddaramaiah mis­ses no chance to rake up the BJP’s scam-tain­ted past in Karnataka during 2008-2013 when it ran the state government.

P.G.R. Sindhia, a senior Janata parivar politician who re-joined the JD(S) rec­ently, says some particular communities are being given a lot of importance. “These factors will go against Siddaramaiah,” he says. But it won’t be easy eit­her for the BJP, says Sindhia, pointing to the differences within the leaders of that party. The JD(S) has lost some of its partymen to the Congress but it’s still a force, chiefly among the Vokkaligas who are the second largest community after the Lingayats. Analysts say it would force a triangular contest in many seats, and if the two big parties fail to get a maj­ority, the JD(S) will be back in the game.

Politically, the plank Siddaramaiah has claimed for himself is Ahinda, the Kannada acronym for the grouping of minorities, backward classes and dalits, casting himself in the mould of Devaraj Urs, who was CM in the ’70s.

It’s an image he has built up from the time he was expelled from the JD(S) in 2005. Many would say the dominant communities like Lingayats and Vokkaligas have had an uneasy equation with Siddaramaiah (who belongs to the shepherd Kuruba community), more so after some ‘leaked’ findings of a caste survey last year showed their community populations much lower than it is generally understood. (The government hasn’t rel­eased the survey results yet and claimed that the figures weren’t true).

Congressmen say the welfare schemes have benefited every community. More significantly, Siddaramaiah has also ­waded into the Lingayat-Veerashaiva identity debate—an  issue that, some say, has been dormant for long. The terms Lingayat and Veerashaiva have been traditionally used as synonyms to denote the large community that follows the teachings of Basavanna of the 12th cent­ury. They are spread across many regions in the country, but largely in Karnataka and Maharashtra. But the demand from some quarters—it came to the fore in July with a large rally in Bidar—is that Lingayats be seen separately from Veerashaivas who, they say, also hold on to some tenets of the Hindu orthodoxy.

“This is not a political agitation; we will not side with any party,” says S.M. Jaamdar, a retired IAS offi­cer who is part of the Lingayat Swatantra Dharma Vedike, a ­forum that wants Lingayats to be given minority status. “It began as non-political and we want to maintain it that way. It’s basica­lly a cultural, religious and social agitation and a mass awakening,” Currently, they come ­under the ambit of Hinduism. Siddaramaiah recently said all the representations received from sections of the community have been referred to the state’s min­ority commission for its views. The Lingayat community—seen to be over 16 per cent of the electorate—has over the years come to be a crucial support base of the BJP, whose chief ministerial candidate, Yeddyurappa, is their tallest leader. “Siddaramaiah has been able to disjolt it, but one doesn’t know what significant gains he has got by doing this,” says political scientist Valerian Rodrigues.

Shastri says, "What Siddaramaiah has tried through that is to develop what I would call an Ahinda-plus. But I'm not too sure if it will work in Karnataka simply because the Lingayats are not the Patels (of Gujarat). It’s very difficult to divide the Lingayats."

The main challenge Siddaramaiah faces, says Rodrigues, is from within the Congress, referring obviously to the personal ambitions of party leaders. Siddaramaiah’s five-year term ends in May and many would say there’s still time before the contours of the election become clearer.

With Allah On The ­Loudspeaker